Posted by Sarah, on Frances’ behalf 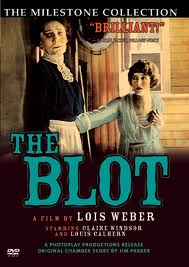 The BFI will be screening a Lois Weber film next month which may be of interest to some of you. Weber, you may remember, was the director of one of the early cinema shorts we watched last term called Suspense (1913). Weber was a prominent film director of the period, often making films which addressed social issues and controversial topics. The BFI will be screening Weber’s The Blot from 1921 next month which is an important film in the director’s oeuvre and it incorporates many of the themes we have discussed in our melodrama meetings. Here is the description from the BFI website:

“Lois Weber was in her time one of the most influential figures in the US film industry. Her masterpiece, The Blot, is a realistic study of genteel poverty among the struggling middle-classes. A professor scarcely has the means to support his wife and daughter, who in turn has three suitors, one an [sic] poor cleric, one the son of a nouveau riche neighbour, and one a playboy. The film is a subtle, compassionate study of the vagaries of society’s rewards and the cruel masquerade of gentility.”