Below are Lies’ introductory notes from her film choice The Divorcee (Robert Z. Leonard, 1930) 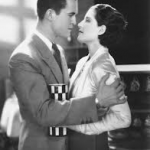 The film was loosely based on the novel Ex-Wife by Ursula Parrott, a vaguely autobiographical account of the life of a recently divorced young woman; the novel was quite controversial at the time and its title does not appear in the film’s credits. Photoplay reported, in advertising The Divorcee, that Ex-Wife was considered a highly problematic book to put on the screen and even claimed it elicited a great deal of commentary from the censors and was “banned from the screen”. The film differs from the book in numerous ways; the main characters have different names, certain parts of the plot were altered, and it also received its new title at this stage.

In terms of genre, the AFI classifies the film as a romance rather than a melodrama; their definition of romance, however, mentions that it may also apply to dramas, melodramas, or comedy-dramas that have a central emphasis on an affectionate male-female relationship. The film certainly has a number of elements that follow the “classic” definition of melodrama; both protagonists suffer as they try to navigate the new sexual politics of the time, and especially the subplot of Dorothy and Paul veers toward heavy melodrama.

The Divorcee is interesting in terms of woman’s film as a follow-up to our previously screened film, The Sheik, even though the two films are completely different and were made almost ten years apart. In terms of The Sheik, we discussed the way in which this film dealt with modern womanhood, with Lady Diana as the “defiant Englishwoman” who thinks of marriage as “captivity, the end of independence”. After being captured by the Sheik, however, she ultimately settles down to a much more traditional life. Jerry, the main character of The Divorcee, on the other hand, does not want to assert her independence by refusing marriage; instead, she wants to remake it to her own wishes. Before she agrees to marry her husband, she makes him promise they will have a “modern” marriage and it is not his cheating, but ultimately his failure to live up to this ideal that leads to their divorce.  It is a woman’s film, but of a different, modern kind.

An article in the LA Times, published in May of 1930, corroborates this and emphasizes that honesty is the key issue stressed in the film, and that it “dares to do what other films have been afraid of; it handles the question of infidelity openly, but delicately”. Photoplay made a similar point and also said that though the film is enjoyable, it will undoubtedly make you “go home and have a good long talk with your spouse” – bringing the reality of the film perhaps a little too close to home.

In terms of its popularity, it is hard to figure out exactly how well The Divorcee did in theatres. Photoplay mentions that it broke all the records set by Anna Christie at “a Los Angeles theatre” which, though extremely vague, does seem to point at some measure of success; this is also supported by the fact that it won Norma Shearer her first and only Academy Award. As such, in Photoplay, both the film and Shearer’s performance were a part of the “best of the month” in May 1930, and throughout that year, the film was referred to in “do not miss these recent pictures” lists and called a movie “destined to be one of the most talked of pictures in years”. Photoplay also noted during the next few months that it was the film that drew the most fan letters and a selection of these was published throughout the year 1930.  Most of these letters were very positive and praised particularly Shearer’s performance.

In terms of Norma Shearer’s career, The Divorcee was the one film that would to a large extent define her pre-Code output. She played a very similar character in Let Us Be Gay, her next film, and then moved on to play a young woman with a desire for love but none for marriage in both Strangers May Kiss and A Free Soul. As such, she was referred to in the Payne Fund Studies (published in 1933) as “a torch-bearer for the single standard” whose films always dealt, in some sense or other, with the sexual equality of men and women. The LA Times stressed this aspect as well and noted that “Miss Shearer is a staunch advocate of the modern girl, her roles usually portray one type or another”. It would be an important part of her star persona until the mid-1930s.

In regard to Shearer’s star persona and career, it is interesting to compare this film with The Women, which she would make in 1939. This later film also deals with a divorced woman but in a crucially different way.

The full 1930 run of Photoplay magazine is available via www.archive.org.