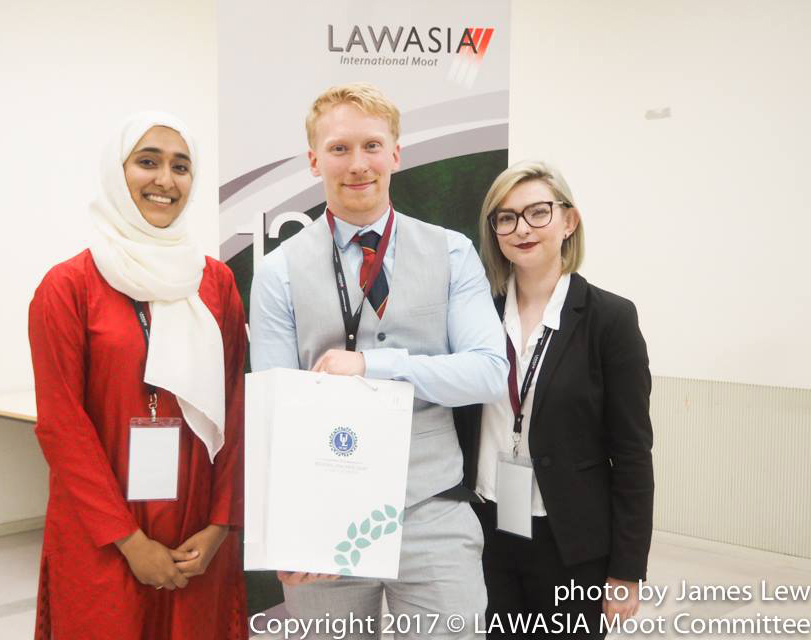 Three Kent Law students who competed in this year’s LAWASIA International Moot Competition in Tokyo have been reflecting back on the skills they gained as a result of taking part.

Together the team was required to tackle a complex moot problem concerning the termination of a partnership agreement for a multimillion dollar jade-mining business in Myanmar. Working within the jurisdictions of Japan and Myanmar, the students had to research intellectual property law, international trade, commercial law and contract law. They were competing against 16 teams from China, India, Japan, Malaysia, Pakistan, Singapore, Sri Lanka, Thailand and Vietnam.

Cara said: ‘It was really interesting learning the law of countries (Japanese and Myanmar law) for the moot and made me realise that practicing abroad would be interesting and possible. It was exciting to work on such a massive and complex moot problem – taking part has definitely improved my confidence in my mooting ability and legal skills as well as my argument and networking skills.’

Maariyah said: ‘The moot problem challenged me to go beyond what I learned in first year and helped me to enhance my research skills. The opportunity to travel to a new country and try a different style of mooting, broadened my mind and humbled me at the same time – I discovered strengths I didn’t know I had but I also realised there’s a lot yet to learn!’

Keegan: ‘Having to learn two new legal systems with little to no pre-existing knowledge was exciting and incredibly nerve-wracking. But that is what was so great about this experience and mooting in general; we are often forced to jump into the deep end where it is sink or swim. It is this pressure that pushes us to excel and ultimately what makes us stronger advocates.’

Johanne Thompson said the competition had been invaluable in terms of the skills the students had developed: ‘They have gained an insight into an increasingly globalized world, learning different styles, cultures and approaches to legal practice. They were able to observe and perform against some of the best mooting teams from across Asia. Not only did they gain skills professionally and personally, but they were also able to forge links (via social media) with students and legal professionals globally – this in turn will improve their employability status among fellow lawyers in an increasingly competitive profession.’

The annual moot is organised by LAWASIA, an international organisation of lawyers’ associations, individual lawyers, judges and legal academics in the Asia Pacific region; the chair of its Moot Standing Committee is Kent alumnus Raphael Tay, a partner at Chooi & Company in Kualar Lumpur.

It is the third year a team from Kent have entered the competition; in 2015, final year Law LLB students Orestis Anastasiades, Elena Savvidou and Lizzie Virgo secured a top ten finish in the 10th LAWASIA International Moot Competition held in Australia; and in 2016, Melanie Lafresiere, Jas Cheema and Tom Bishop competed in the 11th LAWASIA competition held in Sri Lanka.