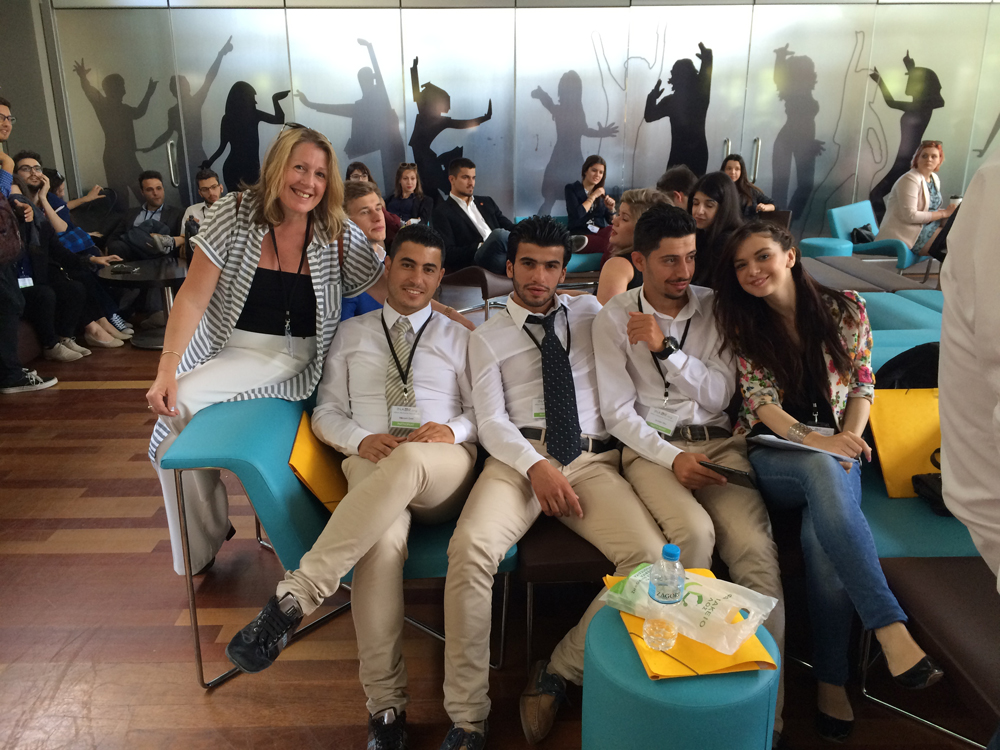 Kent Law School Lecturer Janie Clement-Walker has described a surprise opportunity to coach a team of Syrian refugees for a mediation tournament in Greece as one of the ‘most emotional and heart-warming experiences’ of her life.

The request was sprung upon Janie on her arrival at the American College of Greece (ACG) in Athens by competition organiser Elena Kolsaki, a Greek based mediator and board member of the International Academy of Dispute Resolution (INADR).

Janie is an accredited practitioner with the Centre for Effective Dispute Resolution (CEDR) in the UK and works closely with INADR in support of mediation competitions organised around the world. The young men she coached had all had their studies interrupted by the war in Syria. They were selected by Elena for the annual Greece Mediation Tournament from amongst a pool of English-speaking Syrian candidates living in refugee camps in and around Thessaloniki. The idea had come to Elena as she made preparations for the tournament: ‘In Greece we hear on the news everyday stories about the refugees, the conditions they have to live in and the problems they are facing with relocation to other countries. We see thousands of them piled up in camps, living in tents, lining up for food and clothes. They all have a story to share – a life that was normal before it turned into the nightmare caused by the war.

‘I knew some of these refugees must be students and felt they deserved an opportunity to start dreaming again of a new life based on some hope for a better future. I saw the mediation tournament as a unique opportunity to make a strong point that, in Greece, we do care for the wellbeing of our fellow people. And also that knowledge is a gift that should be offered to everyone, regardless of his/her origin or background.’

After seeking permission to enter the camps, Elena interviewed a number of potential candidates: ‘I tried to understand a bit of their background, their aspirations, their understanding of what I would expect from them. After some careful thought I chose Mohammed, Ibrahem, Mutasem, Geema, Ahmed and Ebrahim. We met several times, giving us a chance to get to know each other better and to prepare for the competition. I gave them material to read and coached them as much as I could within the time we had before the competition began. Their transformation was miraculous!’

INADR offered clothes and hotel accommodation to all six young men for the duration of the competition. Sadly, after the first day of coaching with Janie, a serious bombing incident affecting a family member in Syria meant Geema, Ahmed and Ebrahim had to return to their camp.

Ibrahem, Mohammed and Mutasem remaind in Athens and continued their intensive coaching sessions with Janie. They went on to compete in three separate rounds of the tournament, reaching the semi-final and earning themselves a trophy and ‘Spirit of Mediation’ medallions. Janie, who has also been invited to coach and judge at the International Negotiation Competition in Switzerland next month, said: ‘I had been looking forward to judging in the Competition in Athens and meeting up with my INADR international mediation family, especially Elena. I could not however, have envisaged the part I would play in making such a difference in the lives of these six Syrian refugees – not only by coaching them through the competition, but by showing them there are people that do care about them and their fellow refugees. For the boys it was an amazing opportunity. But for me too, it was one of the most emotional and heart-warming experiences I have ever had.’

At the close of the competition, news of Ibrahem, Mohammed and Mutasem’s successful participation was reported in a local newspaper in Greece. All six young men have since returned to the refugee camps but at least one has the hope of securing a scholarship to ACG, offering him a chance to complete his interrupted education in Athens. Efforts to secure scholarships for the remaining five will be ongoing.

Elena said: ‘I am still hoping that these Syrian young men have gained an invaluable experience, one that can hopefully open some doors for them. I hope all of them will be given an opportunity to pick up their studies again. That’s probably the most important thing for them right now. And their successful participation in an international competition on peaceful resolution of disputes and mediation is living proof that they can do it!’

Reflecting on their experiences, Ibrahem, Mohammed and Mutasem shared the following insights:

My participation in the tournament was a really great experience. I was so excited because many people said to me I can’t do it. So it was some kind of a challenge for me to make them see that we can do it. I think we can’t just sit and say we want a new life, we have to fight to do it – and by saying fight, I don’t refer to the fighting with arms that we have in Syria! We need to let other people know that Syrians are nice people. We’re not just people fighting with weapons. We used to have a good life before the war began. I can only say that we’re really peaceful people. I am very happy that I had the opportunity in this competition to prove that and I want to thank Elena, Dick, Meghann and Janie and everyone for all that they are doing for us. Our main purpose in our family has always been to get a good job and we were trying to achieve that; I was studying petroleum engineering in Al Forat University, my big brother was studying civil engineering and my little brother was in high school. My dream was to become a petroleum engineer. I had a simple life and I lost my happiness, hopefully not forever. I still have a dream and the will to earn my life back. I think all the words in all languages cannot express my feelings; I want to do what I feel will help all the people around the world. I am very grateful to Elena, Janie and INADR for giving me this great opportunity to start hoping again and for being with us all along. I used to work and study at the same time but in the last months everything was gone. I studied English Literature but I left my university because of the war. I came to Europe because everything is now destroyed in Syria. No safe place, no future, no study. Just the bombs which are falling everywhere. I want to be in a safe place and I came to Europe just to find that. I want to live my life without war. I wish to bring my family so that they can all be with me. I really hope to continue my studies and work and give the world the best of what I have. The INADR tournament was my first best experience in Europe and I will never forget it. I want to thank everyone that gave us hope and all the people who understand and feel for us.