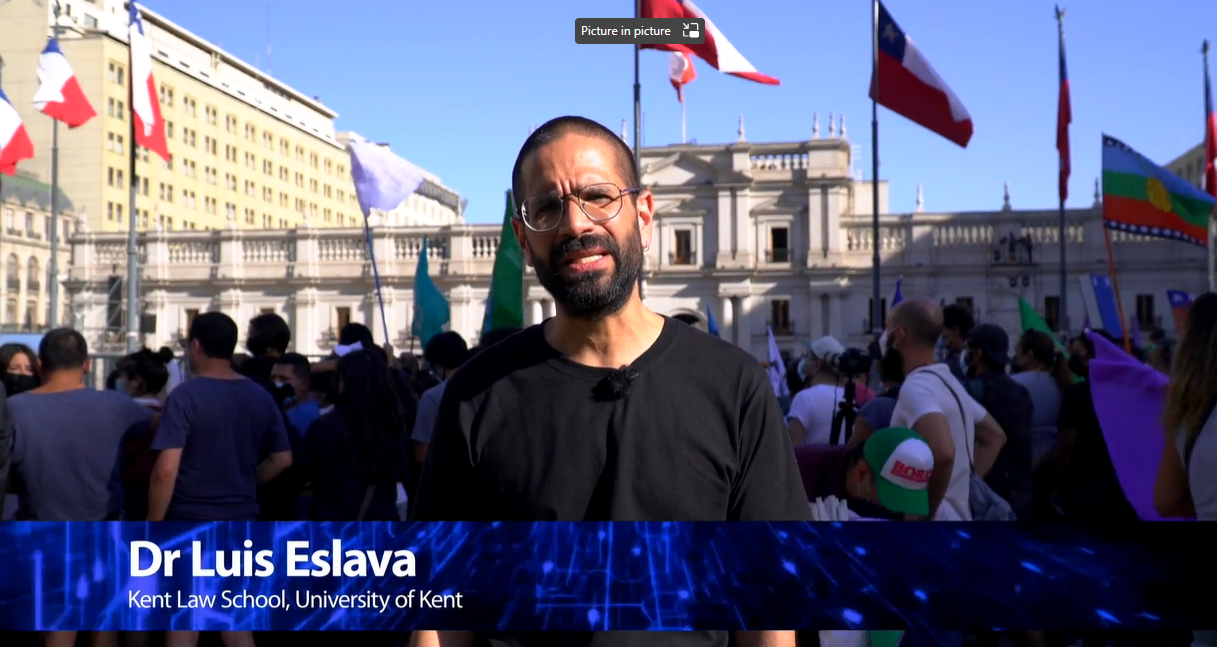 In a matter of weeks, Chileans will head to the polls to vote on a new constitution. It’s a once-in-a-generation decision which could see its current, decades-old version – first imposed by the right-wing dictatorship of army general Augusto Pinochet – overhauled. If approved by the public, it will be in part thanks to Dr Luis Eslava, Reader in International Law.

The work of Dr Luis Eslava, and his Ruptures21 New Constitutional Futures project, is at the centre of a new documentary released on KMTV: ‘Chile: Constructing a Constitution’:

The documentary introduces some of the key architects in the constitutional process and details what these changes could mean for the country and the wider region. It sees Dr Eslava travel to Chile’s capital Santiago to see how his project is striking up conversations about the country’s future and, in doing so, overcoming political, social and economic divides.

“It is a great privilege to share the work that I have been doing in Chile in the New Constitutional Futures project and the way that we work under the Rupture21 initiative with the broader public” says Dr Eslava.

“The idea has been to enrich the constitutional debate by informing members of the Constitutional Convention, experts and citizens about the challenges, as well as the possibilities, of drafting a new constitution in the 21st century. In our interconnected world, crisscrossed by countless economic relations, marked by profound inequalities and going through a massive environmental transformation, debating in an informed way about the fundamental rules that bring us together is more important than ever,” he adds.

If approved, the new constitution will be one of the most progressive in the world putting indigenous rights and climate change front and centre. Dr Eslava and the team were keen to capture this period of transition and political debate in the film.

“The shoot was a once-in-a-lifetime experience”, said Cameron Tucker the documentary’s producer. He recounts witnessing the inauguration of President Gabriel Boric: “It was one of those pinch me moments. There we were, fresh off the plane, right at the front of hundreds of thousands of whooping supporters, only a stone’s throw from the President delivering his message of hope. You couldn’t help but get swept up in the moment and feel you were watching history unfold right in front of you.”

It’s a feeling echoed by Ella Craker, the cinematographer on the film: “Being in the midst of the crowds during one of the most moving moments in modern-day Chilean history will be an experience I will never forget. This documentary was eye opening to work on and the impact it has will be ongoing for generations to come.”

Dr Eslava hopes “viewers get a sense of how important and meaningful the political, legal and economic transformations that take place outside the Anglo-American and European world are.”

He goes on to say “Chile is giving us all lessons of how to address both past and present injustices and future challenges by going back to redefining the rules of the game.”

All eyes will be on the South American nation come Sunday 4th September. Will Chileans vote for a bold and liberal vision of the future? Could Dr Luis Eslava help to have steered this seismic political shift? Millions, in Chile and Kent, wait with bated breath.