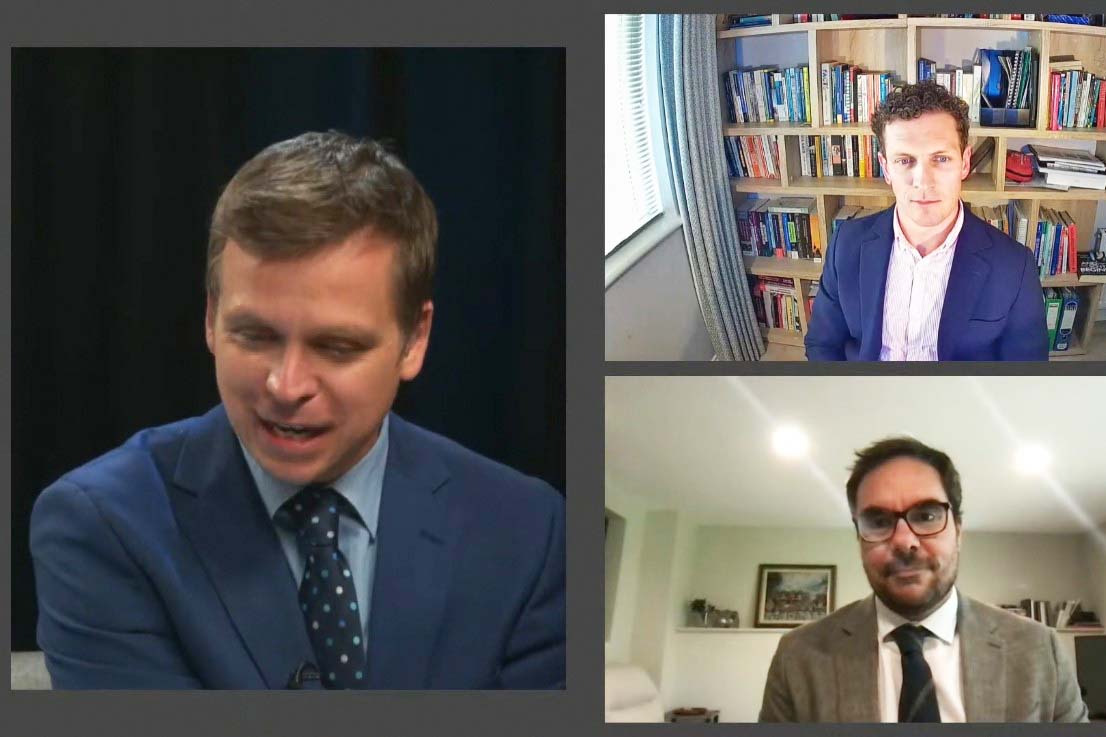 The Lecture was a unique opportunity to hear direct from GLAN co-founders Dr Gearóid Ó Cuinn and Dr Ioannis Kalpouzos and to celebrate the achievements of GLAN in the field of international law. It was hosted by CeCIL online, in partnership with KMTV.

In his introduction to the Lecture, CeCIL Co-Director Dr Luis Eslava pointed to global challenges such as poverty, environmental collapse and the ongoing refugee crisis, all of which are areas addressed by GLAN in their fight for equality and justice. Dr Eslava said: ‘When we were planning this year’s Annual Lecture, we felt that, at this point in time, it was our duty to call attention to collectives advocating for the rights of the most vulnerable. GLAN was definitely the first choice that sprang to mind.’

Dr Ó Cuinn and Dr Kalpouzos explained how GLAN is a unique network of academics, practitioners and investigative journalists. Together, they build innovative strategies and employ international human rights legal actions to bring states and corporations to account.

Dr Ó Cuinn discussed a recent GLAN report on “Tainted Tourism” which exposes the way in which package tourism contributes to the illegal settlement economy in Israeli occupied territories. He said the report reveals “how the industry leaders/leading companies in the tourism sector are systemically misleading the nature of Occupied Palestinian Territories and portraying them as normal sites in Israel.” GLAN hopes to use consumer law to nudge the behavior of these companies. It also aims to prompt regulators to prohibit advertisements of settlements, especially sites which constitute breaches of international law.

Talking about GLAN’s approach to critical international law, Dr Kalpouzos acknowledged that “law to some extent is always part of the problem of structural inequality and injustice.” In their quest for transnational justice and equality, GLAN explores how some rules, concepts and institutional and juridical avenues may nevertheless be useful in highlighting and challenging structural injustices of the international legal system.

The lecture also featured pre-recorded messages from two members of GLAN’s Legal Action Committee, Dr Yvonne McDermott Rees and Dr Violeta Moreno-Lax. Dr Rees talked about open-source information and its use in accountability for human rights violations. Dr Moreno-Lax spoke about migration and border violence and the instrumentalisation of the maritime environment by EU member states who use it to deny their human rights obligations.

CeCIL shares with GLAN a commitment to thinking creatively about the possibilities and limitations within international law. CeCIL Co-Director Dr Emily Haslam said: ‘CeCIL members are committed to interrogating and challenging the power relations and political ideologies that run through, shape and are shaped by international laws. Celebrating GLAN’s work with the 2020-2021 CeCIL Annual Lecture was a testament of this commitment and a recognition of the crucial work done by GLAN and its members.’

In addition to an annual lecture, CeCIL offers a busy programme of activities for law students, including a speaker and films series and workshops for students keen to develop their employability and international law skills. You can follow CeCIL’s activities though its Facebook and Twitter accounts.