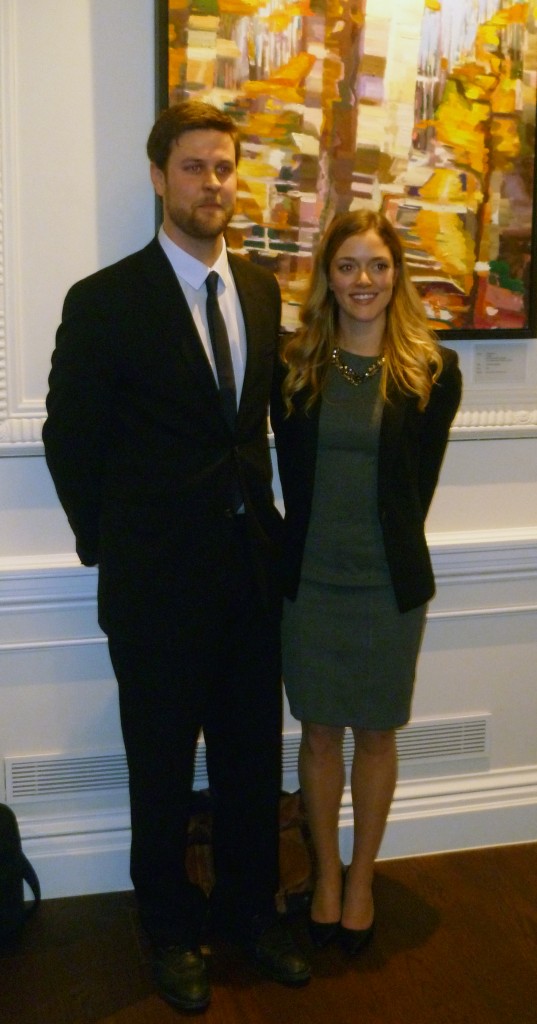 A team of two Canadian Law students from Kent represented the University in the final of  the MacKay Cup, a new national mooting competition held at Canada House in London last week.

Senior Status students Christine Lawton and Nick Smith from Kent Law School competed against a team from the University of Sussex in the final of the competition.

In a close contest, Christine and Nick (pictured right) won on the law in the final moot but the six judges were split when it came to deciding an overall winner. A seventh judge was called in who selected Michael Bishop and David Reeve from Sussex, as the first recipients of the MacKay Cup.

Speaking about his participation in the competition, Nick said: ‘I would say that it was as enlightening as it was terrifying. It’s always a challenge to piece together submissions on an area of law that you’re not well-versed in, but it’s also a very engaging process that gave my partner Christine and I the opportunity to refine some pretty essential legal skills.

‘Coming up with legal arguments and then having to defend them in front of six judges was a bit harrowing, but it was a really positive experience and mooting in general has given me the opportunity to meet a variety of legal professionals that I otherwise may never have encountered.

‘Furthermore, the support from Kent Law School (specifically Lecturer Per Laleng, Professor Nick Jackson, Professor Didi Herman, and Daniel Lee) was overwhelming and really put us in the best possible position to succeed.’

The MacKay Cup, open to all Canadian students in the UK, was launched by the University Of Leicester School Of Law in October 2014 with the support of Canada’s Minister of Justice and Attorney General, the Honourable Peter MacKay.

Further opportunities for Canadian Law students at Kent to test their practical legal skills in topics from Canadian law have been provided this month by two events on campus; an annual Law Moot and a new Canadian Law Negotiation Competition.

In the Canadian Law Moot held on Friday, Catherine McLatchie was the winner of the award for ‘Best Mooter’. The annual Law Moot enables Canadian students at Kent Law School to study and work with Canadian legal content and is the biggest event of the year in the calendar of events organised by the School’s Canadian Law Society.

Catherine was mooting for the Appellant with team mate Kate Baretto. Mooting for the Respondent were David MacLellan and Kevin Henderson. Teams were judged by Alan Thomson (a founding member of Kent Law School & Honorary Fellow), Per Laleng (Director of Mooting at Kent Law School), Nick Jackson (Senior Lecturer in Law) and Hilary Goodman (a visiting Kent alumna who is currently practicing in Ontario).

The inaugural Canadian Law Negotiation Competition was launched at Kent on Monday with subjects for the Negotiation drawn from Canadian contract and commercial law. Stacia Franz, Amanda Huxley and Meghan Kinna won in the final against a team comprising Kevin Henderson, David MacLellan and John Pecchia.

Kent Law School has a thriving Canadian student community and a growing network of alumni who have returned to Canada after graduation to qualify and practice. With more than 80 Canadian students, the School has one of the largest Canadian communities in the UK.