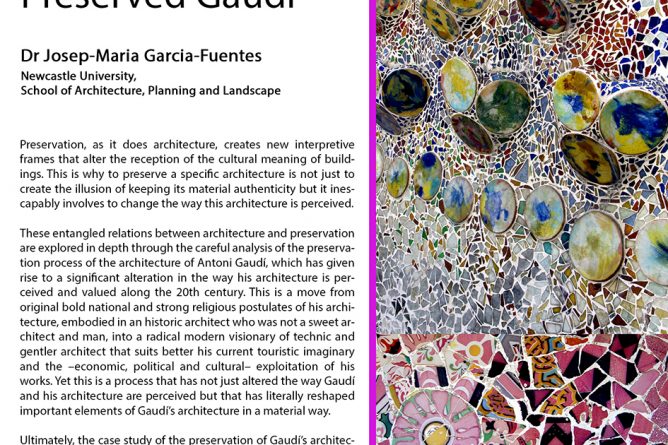 The next CREAte Open Lecture will be given by Dr Josef-Maria Garcia-Fuentes on Tuesday 22nd March at 6PM in MLT1.

Preservation, as it does architecture, creates new interpretive frames that alter the reception of the cultural meaning of buildings. This is why to preserve a specific architecture is not just to create the illusion of keeping its material authenticity but it inescapably involves to change the way this architecture is perceived.

These entangled relations between architecture and preservation are explored in depth through the careful analysis of the preservation process of the architecture of Antoni Gaudí, which has given rise to a significant alteration in the way his architecture is perceived and valued along the 20th century. This is a move from original bold national and strong religious postulates of his architecture, embodied in an historic architect who was not a sweet architect and man, into a radical modern visionary of technic and gentler architect that suits better his current touristic imaginary and the –economic, political and cultural– exploitation of his works. Yet this is a process that has not just altered the way Gaudí and his architecture are perceived but that has literally reshaped important elements of Gaudí’s architecture in a material way.

Ultimately, the case study of the preservation of Gaudí’s architecture challenges the established conceptualization of heritage and preservation and poses the need to rethink the current preservation paradigm towards a more flexible and creative one grounded on architecture.

Dr Josep-Maria Garcia-Fuentes is Lecturer in Architecture at Newcastle University (UK) and Fellow of the Catalan Observatory at the London School of Economics (UK). His research interest focuses on the history of architecture, heritage, preservation and history of the ideas. He has been previously Assistant Professor at the Universitat Politècnica de Catalunya–BarcelonaTECH (Spain) and Vice Dean of International Relations at the School of Architecture of the Vallés-Barcelona at the same University.

He has been awarded with the First National Prize of Spain for university graduates (2006) and with research grants by the Government of Spain (2007–2011), the Samuel H. Kress Foundation for the Society of Architectural Historians (2011) and the Santander Bank (2014).

Josep-Maria is also a registered and practising architect, is the author of a different projects and has collaborated extensively with prestigious architects like Juan Navarro Baldeweg and Josep Llinàs.