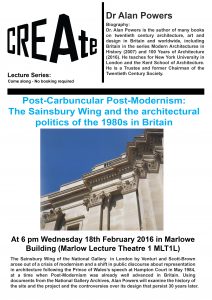 CREAte Research Centre’s recent Open Lecture was given by Dr Alan Powers on Wednesday 18th January 2016 in Marlowe Lecture Theatre 1. Dr Alan Powers is the author of many books on twentieth century architecture, art and design in Britain and worldwide, including Britain in the series Modern Architecture in History (2007) and 100 Years of Architecture (2016). He teaches for New York University in London and the Kent School of Architecture. He is a Trustee and former Chairman of the Twentieth Century Society.

His lecture entitled, ‘Post-Carbuncular Post-Modernism: The Sainsbury Wing and the architectural politics of the 1980s in Britain’ explored The Sainsbury Wing of the National Gallery in London by Venturi and Scott-Brown which arose out of a crisis of modernism and a shift in public discourse about representation in architecture following the Prince of Wales’s speech at Hampton Court in May 1984, at a time when Post-Modernism was already well advanced in Britain. Using documents from the National Gallery Archives, Alan Powers will examine the history of the site and the project and the controversies over its design that persist 30 years later.