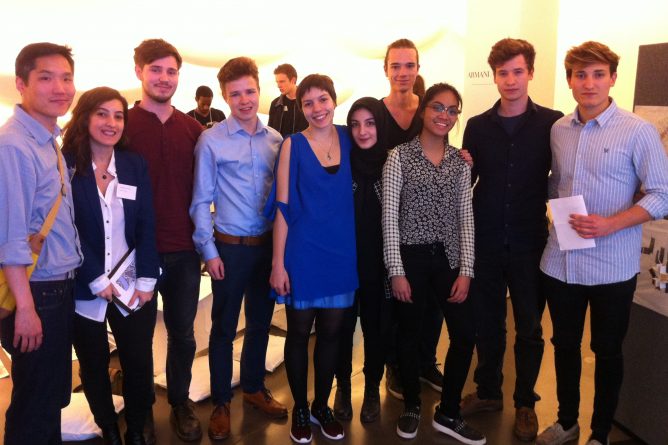 KSA Students took second place in a design competition in London competing against teams from other UK schools of architecture!

A group of BA Architecture students represented KSA at the AIA (American Institute of Architects) design charrette in London on Saturday 7 November. The event took place in the Zaha Hadid-designed Roca showroom near Chelsea Harbour, and AIA members from London practices (Ecehan Esra Top from Foster and Partners, and Francis Hur) mentored the students during the day. They were working on ideas to improve the sense of place and identity in the area nearby, known as the Chelsea Design Quarter.

When asked about the day, third year student Ed Powe said ‘the Charrette, tasked the students to produce a master-planning strategy of art landmarks to increase the connectivity of the region. The design produced by the Kent School of Architecture was the only proposal which took a soft architectural approach, choosing to design a yearly festival rather than a series of buildings. The festival was named ‘The Chelsea Living room’ and annually challenged the local design community to collaborate in the creation of an external living room of over-sized furniture, at each ‘node’ on the main street (Kings Road). The concept, similar to that of the Chelsea flower show, is that this event would help to raise awareness of the area in order to encourage its future expansion. The jury chaired by Patrick Lynch Awarded the Kent School of Architecture second place for the one day design competition.’ 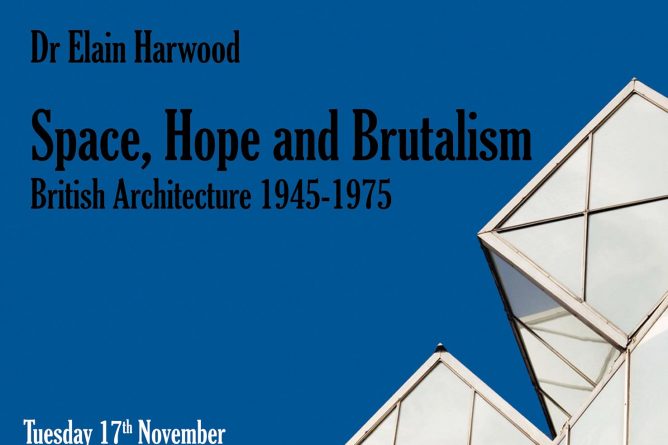 Elain Harwood is the foremost historian of post-War British Architecture at Historic England (formerly English Heritage). She is the author of countless books and articles on the subject, and her latest book Space, Hope and Brutalism: British Architecture 1945-1975 has just been published. Dr Harwood has been an active member of the Twentieth Century Society for many years, organising tours and editing journals.

PhD Student Tim Fox-Godden won the Gail Braybon Prize for Best Postgraduate Paper at the 8th Conference of the International Society for First World War Studies; the conference was entitled ‘Landscapes of War’ and was held in September 2015 in Trento, Italy.

The paper, ‘Sites of Memory Beyond Mourning?’ looks at narratives of memory contained within the architecture of the British war cemeteries along the former Western Front of the First World War. The traditional interpretation of these sites has been one centred on the commemoration of the dead and whilst this is important it is not the only layer of memory. The paper, based on Tim’s PhD research, explores one of these other layers of memory; specifically, the relationship between the cemetery architecture and the landscape of the Great War. Using a case study of a cluster of cemeteries on the Franco-Belgian border the paper identifies a design typology in the relationship between the architecture and the wartime landscape. In doing so it highlights the layer of memory that retains the geometries and features of the battlefields that would otherwise be lost.

Dr. Carolina Vasilikou from CASE is organising a sensory walk in Canterbury city centre with the Canterbury Society. How does the thermal, acoustic, visual and olfactory environment affect our state of comfort while walking?
There are still places available! Sign up by sending an email to: kv50@kent.ac.uk