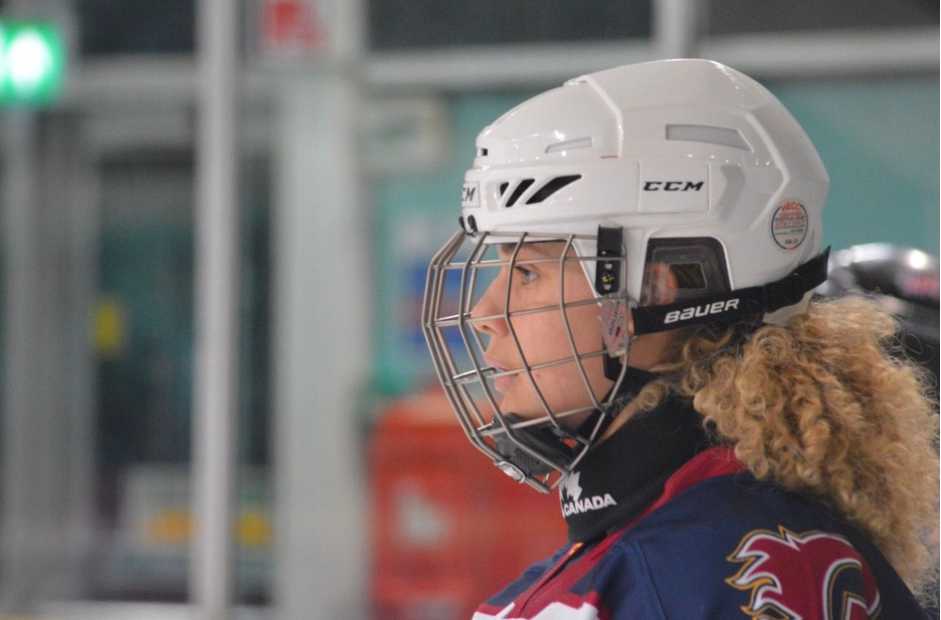 Earlier this year, we interviewed new Sports Scholar and Sport & Exercise Science undergraduate Leonie Charles to find out how she discovered Ice and roller Hockey and how she’s flying the flag for women in this unique sport.

Q) What were your sporting ambitions whilst growing up and before arrival at University?

A) Ever since I started playing ice hockey in 2016, I had dreams of playing for the national team and representing the country. Playing abroad had always been of interest to me too, where hockey is a lifestyle rather than a hobby. Playing professionally will always be the dream!

Q)  What are you studying at Kent and what are your career ambitions after graduation?

A) I am currently studying Sport and Exercise Science with a year in industry and am in my first year. I’m yet to explore all of the different areas within the industry so I’m not too sure yet but am very interested in nutrition in relation to sports performance.

Q) How did you get into your sport and not get distracted by other more traditional English sports growing up?

A) When my parents split up, my dad didn’t know what to do with me on our weekends together. He had spoken to a friend who took his kids ice skating so we went as a social activity at first. I fell in love with it and started figure skating at age 12 but sustained an injury to my ankle so had to take time out which turned into years. I took it back up in 2015/16 and decided that I wanted to try ice hockey too.

I had always been interested in ice hockey but could never make the session times in previous years. I attended my first session in 2016 and have been sucked in ever since. I’ve always been a sporty person, and was in and out of gymnastics for a while. Through the school, I played football and sports day was the highlight of the year. I would always compete in every competition possible and often come away with various medals! I think I just loved the pace of ice hockey and the fact that it’s a team sport. It’s so different and unusual in the UK and one of the few sports that men and women can compete. It’s hard to describe but it’s almost addictive. I would often train 4 days a week and have 2 or more games on the weekend and still want to go to another training session! Q) You represent the Scheme by playing both Ice Hockey and Roller Hockey, apart from the obvious playing surface, can you explain the subtle differences between the two disciplines and what competition formats you compete in?

A) One of the biggest differences is there are 4 players + a goalie in roller hockey, whereas ice hockey there are 5 + goalie. This means different formations and tactics to learn. Furthermore, there are slightly different rules in terms of offside, which make some tactics non-transferrable between the two sports. Roller hockey can also be played with a puck or ball, ball being the faster paced out of the two which can be tricky to control when stick handling. Skating feels similar, with slight differences such as stopping.

The roller and ice competition formats are quite different. For roller, you often have a tournament set up for game fixtures so will play multiple in a day, once or twice a month, whereas ice games fall one a weekend or sometimes two, but never more than 1 a day so there is more time for recovery.

Q) Can you explain the team formation and dynamics for an Ice/Roller Hockey novice and your role/position within the teams you play for?

A) For ice hockey, there are 3 forwards and two defencemen and a goalie. I am a forwards so am looking to drive into the offensive zone, make plays and score goals, whilst also getting back to the defensive zone if the other team break out. I chose to play forwards because of my figure skating past I’m stronger skater rather than good at stick skills and often rely on my speed to beat defenders. I play the same role in roller hockey. Q) Your sport has mixed representation and you are one of the few females in a league predominantly made up of male players – what challenges does this present and what inspires you about being a female athlete in this sport?

A) Personally, I absolutely love playing on a team made up mostly guys. It can be hard as you are competing against people that are naturally bigger and stronger but then you just have to use different skills to get around this such as speed or deception. I love the pace and that it can be rough at times. I aspire to get to the highest point I can in the men’s leagues and show the younger generation that it is so do able if you want it. There are women in the league above me and I really do look up to them. The question of being treated equally is always a common subject and I would say sometimes yes and sometimes no. Some people go easy because I’m a girl and some people go harder but I love it.

“I absolutely love playing on a team made up mostly guys. It can be hard as you are competing against people that are naturally bigger and stronger but then you just have to use different skills to get around this such as speed or deception. I love the pace and that it can be rough at times.” Q) Ice Hockey is huge in North America and Canada especially at Universities and Colleges, how much has the sport developed in the UK/Europe and what does the future hold?

A) I’m not entirely sure of the developments as I started quite late and there haven’t been any major changes in this time, although in the UK there is a professional league but this is only open to men. In terms of women, the opportunities in the UK are very limited at this moment in time. I hope that there is an expansion of ice hockey in the UK, especially now as GB men got to the top flight in the world championships so got more recognition that ever.

Q) Ice Hockey is a popular addition to the Winter Olympics but apart from the American & Canadian Leagues what other major competitions are there?

A) Europe is a really good place to play hockey, both roller and ice. It can be a more accessible option too as America and Canada cost a fortune if scholarships aren’t achieved and just in general! Sweden, Germany and Switzerland are great places to play and often pose professional or semi-professional opportunities. The Kontinental Hockey League is looked at as the strongest European Hockey League for men and the Swedish Women’s Hockey League for women.

Q) We hardly ever see Roller-Hockey on the television or the media, what needs to happen for this sport to get more recognition?

A) I’m not too sure why it doesn’t receive as much attention. It can be brutal, which is what people love right?! It’s as hard as ice hockey, requires immense skill and yet there are barely any venues. It is also not uncommon for ice hockey players to cross between the two. I think if clubs were to advertised more, whether that be through social media or more school visits, maybe more people would know that it still has leagues and exists outside of street hockey. Q) If UK children are both enjoying general sport and are staying upright at the skate park how can they get involved in your sport at grass roots?

A) Previously street hockey used to be the way roller hockey would be played and my coach, Barry, came from this generation of hockey players. He often runs outdoor sessions with spare kit to get kids in London involved in the sport so attending one of those would be a great way. Most clubs have spare kit and if they are approached are usually welcoming and offer the first few sessions free. Barry also used to visit schools with skates and sticks to introduce kids to the sport. As mentioned previously, Invicta Junior Ice Hockey Club allows under 9’s to play for free too.

Q) You discovered your sport at a relatively late age as a teenager and you have since helped coach children in your spare time. What basic skills, fitness level and equipment would children need to get started in Ice/Roller Hockey?

A) Skills such as skating forwards and backwards form the foundation for all key movements and can be built on within training sessions. Often with kit on, people are usually more willing to try new things, although kids are usually fearless anyway! Fitness levels don’t have to be at any standard and are again built up within sessions as they increase in difficulty. Equipment needed would be shorts, shin pads, skates, chest pad, elbow pads, neck guard, a helmet and stick, so a lot! A good start is a pair of skates and it’s not uncommon for clubs to lend kit or people selling kit second hand. Invicta Junior Ice Hockey Club (based in Gillingham) offer Under 9’s to train for free, to try and introduce more children into the sport and make it more accessible!

“Skills such as skating forwards and backwards form the foundation for all key movements and can be built on within training sessions.”

Q) The challenges of Covid-19 have limited competitions this season, however, you recently successfully trialled for the GB University Ice Hockey squad. Tell us about this team and where they will be competing?

A) The team are made up of women from Scotland to Surrey that are currently studying at university and a number of the team will be made up from players who are from the UK but are studying abroad at the moment. COVID-bearing, the team will be competing in the FISU games, which are held every two years and this year are set to be held in Lucerne, Switzerland from the 11th – 21st Ice hockey is one of the many sports played at this tournament, with teams all over the world competing such as Canada and USA. In the lead up to these games, many smaller games will be played at home to get the team prepared for the tournament against various teams. I am beyond excited to go and work hard in the next training camp and get to know the girls a bit better and prepare!

Q) How important is physical activity and sport in complimenting your studies at University? What advice would you give to new students applying next year and looking to engage in a new sport or activity?

A) Sport keeps me focused and I use it to relieve stress when things get tricky. A 15-minute run can be all I need to get back on track if I’m stuck or as a break between revision sessions. It’s my get away and a huge part of my social life too so often look forward to a training session at the end of my day. It also goes alongside my course perfectly because I can apply it to my personal training regimes and performance. The advice I would give to new students would be to join a sports team, even if you don’t intend to take it to a high level, just have fun with it and meet new people! You might just find something you fall in love with!