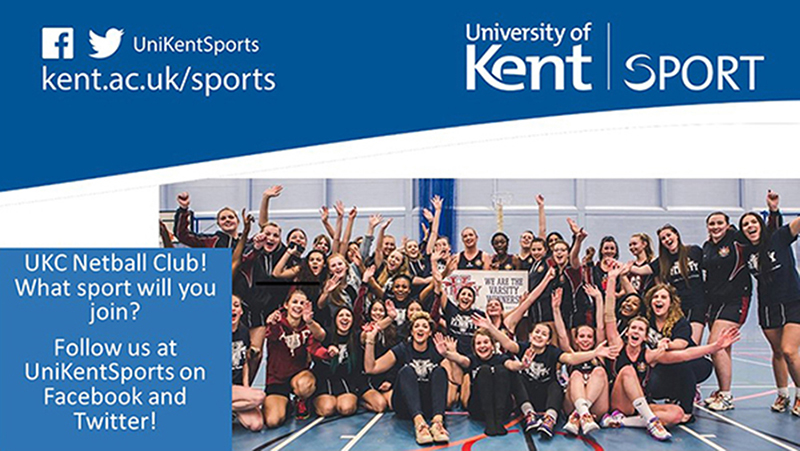 In this series of articles, Kent sport Marketing volunteer Tana Navaratnalingam, will interview a range of sport players from the variety of different sports offered at Kent Sport, all at different ability levels. The interviews will consist of questions surrounding the reasons they chose their desired sport, what their ultimate sport goals are and how Kent sport has helped them be successful in their sport, along with other questions.

The third interview of the Sport Interview Series is Netball. Netball is a ball sport played by two teams of seven players. Games are played on a rectangular court with raised goal rings at each end. Each team attempts to score goals by passing a ball down the court and shooting it through the goal ring. Players are assigned specific positions, which define their roles within the team and restrict movement to certain areas of the court. During general play, a player with the ball can hold on to it for only three seconds before shooting for a goal or passing to another player.  The winning team is the one that scores the most goals. Netball games and 60 minutes long.

UKC Netball are the Netball club at the University of Kent. The club compromises of five squads; four squads participate in BUCS league and the fifth squad competing in the local Canterbury District Netball league. The club is mainly designed for girls of all abilities, from premiership standard to absolute beginners. However, the club also welcomes boys to compete in the in Intercollege league. The club also runs social netball sessions for girls who want to play netball but don’t want to play competitively. The club runs Intercollege league, where members and non – members can take part and play for their college: Rutherford, Eliot, Darwin, Keynes and Woolf.

In this interview, we hear from Rhianna Legg, the president of UKC Netball, share her sports background, her ultimate netball goals and how Kent Sport has helped her be successful in netball, along with other question. Read the interview below:

Tana: In the third interview of the series, we are interviewing Rhianna and she is the president of UKC Netball club. Where is your home location?

Rhianna: I come from Watford so that is just outside of London.

Tana: Really, you are from Watford? I am quite close by. I am from Harrow!

Tana: Yes that is a small world! Why did you choose the University of Kent?

Rhianna: I went to a UCAS fair and I was looking through the prospectuses and I came across Kent and I thought it looked really nice so would go and have a look. As soon as I got here, I just fell in love [with Kent University]. I just love Canterbury. It is a great place to be and the course was perfect for me as well.

Tana: Wow, awesome! What do you study?

Tana: Are you in first year, second year, third year…?

Tana: Are you just doing a BSc or doing a Masters?

Rhianna: Just doing a BSc and then next year, teaching training.

Tana: Wow, nice! How long have you been participating in any sport?

Rhianna: Oh wow! I would say since I was about 5 or 6 I have been doing sport.

Tana: What type of sports have you been playing?

Tana: How long have you been participating in Netball?

Rhianna: I would say for about thirteen years now.

Tana: For about thirteen years. Why did you choose netball?

Rhianna: I don’t really know. My mum always used to play and I think I sort of got it from her and once I went to secondary school, our coach really encouraged me to join a club and ever since I have loved it and I always loved my team. It is such a nice sport.

Tana: What has been your biggest accomplishment in your time that you have been playing netball?

Rhianna: So I used to play goalkeeper in first year and then after first year I got moved to goal shooter and I hadn’t played it for four or five years. Since I have been playing goal shooter, I have had quite a few quarters where I have had 1000% shooting stats. For me, that is a really big accomplishment because I am not the most confident when it comes to shooting. So, when I come off the court and they tell me I’ve got that, it just makes me feel like I can do it.

Tana: Oh yeah, definitely yes! I am guessing it gives you that confidence as well?

Tana: How has Kent Sport helped you in achieving you success?

Rhianna: They have been really supportive towards netball and if we need anything, they are always there on our email. They have obviously given us the rooms and their facilities are really good. A lot of the London teams we play don’t even have rooms for them to play, like indoor courts. So the fact that we have this here and Kent sport are always so supportive with juggling with when we need to use the courts and when we don’t. They have just been really helpful in that sense.

Rhianna: I think it would really help us in the sense that a lot of our equipment is very old now and it definitely needs replacing. Obviously, we only have a set amount of money in our accounts so I just think Kent Sport Project 100 would be really helpful to so that we could get some more equipment, which should be beneficial to us in games and training as well. I would just make it a lot easier for us.

Tana: What has been your biggest setback?

Rhianna: I am very prone to injuries. So in the three years I have been here, I have had five fractured fingers, one soft tissue damage in my ankle and I have already injured my back so much that I couldn’t walk for a day. So this has definitely been a setback for me but I sort of rest it and then come back and I always feel better once I have come back from recovery. Definitely always been prone to injuries!

Tana: Oh my goodness, sounds like me! What would be you ultimate sport achievement?

Rhianna: My ultimate sports achievement would definitely be… I love to win our league and since I have been at university, the first team every year has been relegated and we are currently second in our league. So to win the league would be such an amazing achievement for us and it would be incredible. Obviously, my netball ultimate achievement I would love to play for England but you know, I don’t think it is ever going to happen but I love to. That would be great!

Tana: Oh don’t say that! You never know what will happen. Where and who do you draw our inspiration from? I heard you were talking about your mum…

Rhianna: Yeah, definitely my mum. When I was in primary school I played netball and football mainly, so I got football from my dad and netball from my mum. When I got to secondary school, I had to choose netball. My mum has been so helpful to me. She bought net posts for the back garden because she used to play goal keeper and I used to play shooter back in primary school, so she would always come and help me and mark me. She would come to every single game. She would always be supportive from the sidelines and give me helpful comments and she is my inspiration.

Tana: Wow, that pretty sweet! And that is very personal as well because you have that close connection since very little. Would you recommend this sport to other people and why would you?

Rhianna: I definitely would. I think my time at university, especially would not have been the same if had not joined netball. I was really, to admit, to go to freshers fair but as soon as I did, everyone was so lovely and it is just such a nice feeling to be part of a team and especially this year as well, we have jiggled the teams a bit so our development squad last year, is now the fifth team, so they have a team feeling as well. It is so nice to know to know that you are part of something, and especially in netball, I know we are an all girls sport but all the girls are so lovely and they get along so well and it is really nice to just be a part of it. Some of my best friends at university have been through netball, so I would definitely encourage netball. I know a lot of people have played it since school so they want to try something different but I always knew I was going to do netball and definitely encourage people to take up netball.

Tana: You were just mentioning, I picked up on the idea that is an all – girls sport. Would you encourage guys to get involved as well?

Rhianna: Yeah definitely. For BUCS teams, guys aren’t allowed to play but our fifth team, we would do intercollege as well. Definitely encourage guys to come along as well. We do get a lot of guys and they do take the game very seriously. It is really funny to watch. They get very into it, because a lot of people sometimes, when you tell them that you play netball, they say it is really easy, but when come along and play, they realise there is a lot more rules and it is a lot more difficult than they expect it to be. But they do get into it and I invited a few of my friends to watch Varsity netball and after they were like ‘I really enjoyed that’. I would definitely encourage guys to get involved.

Tana: Do you have sayings or mottos that inspire you?

Rhianna: I just think really, don’t give up and a lot of times in netball, especially as a shooter, I miss a few goals and my head just goes down straight away and like all of my team, they are encouraging and say ‘Don’t give up. Keep your head up. Keep yourself motivated’ and that really carries you through with the whole team because your confidence goes back up and I start getting 100% shooting stats. So, it is definitely ‘Don’t give up. Keep your head up’, especially in netball. You hear that quite a lot.

Rhianna: It is a really fun sport to play, whether it is playing competitively or playing socially. It is a great way to make new friends and it is a great way to encourage teamwork. Especially being in a team of 9 – 10 people, you have to really work well together, and that is when those teamwork skills become very useful, throughout life anyway, and you get to do it with a great bunch of girls.

Tana: It is definitely important – teamwork because when you get a job one day and you are working in a team, you don’t want to be saying ‘Oh, I want to work by myself’. Thank you very much for that! That is our third interview of the series and join us soon for our fourth interview with hockey.