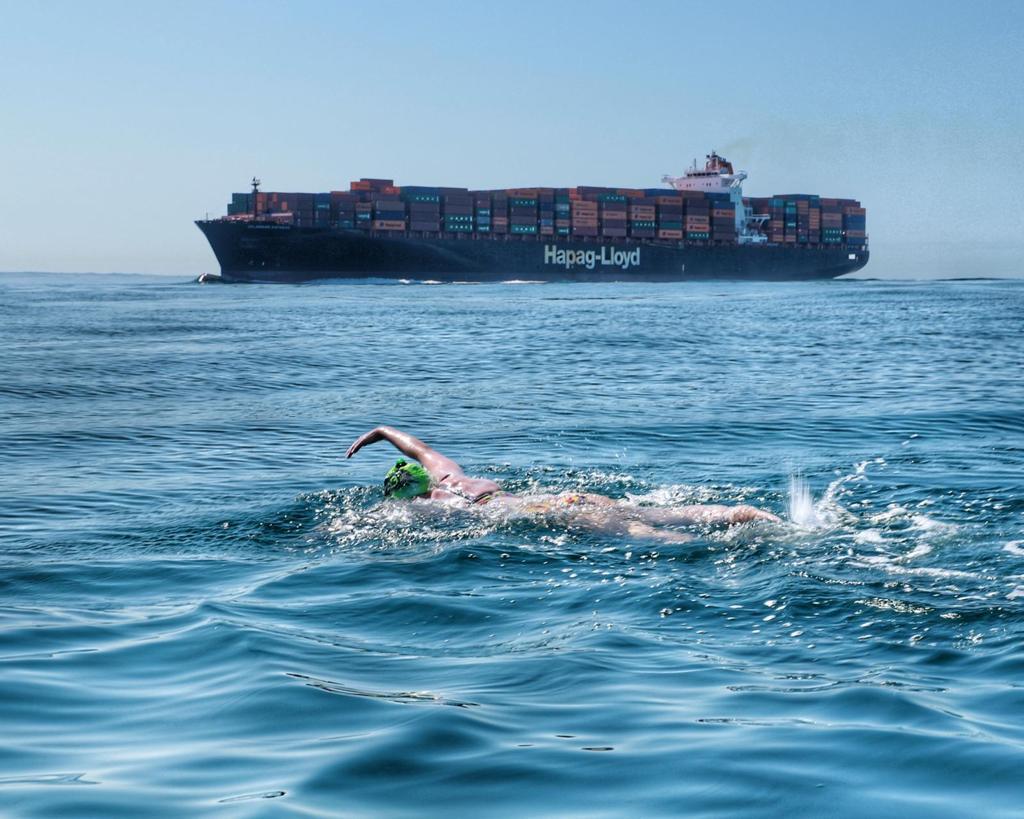 “Sunday 18th July 2021 will be a day I will cherish forever. The day a childhood dream came true of swimming the English Channel.

I stood upon Samphire Hoe beach at 4am, completely clear of the water, to officially begin this challenge. You could hear the water rippling against the beach and a large horn blasted from the boat, Masterpiece, that was around 50m offshore. I was told to leave all my doubts on the shore and then began making my way to the side of the boat, far enough away not to touch the boat and also not to inhale too many of the fumes. It was not completely dark even at that point and within an hour of setting off, a beautiful sunrise was emerging.

The reason for the 4am start, was to make good use of any slack water, before the flood tide started which pushes you east. I set off at a strong and comfortable pace and began making my journey south easterly. The first section to cross is the English inshore water. As my left hand entered the water, I brushed past something very slimy and warm. It was a little daunting as there was not enough light to know what I touched, but I knew I needed to just keep moving.

Once past the English inshore, I made my way into the southwest shipping lane, one of the busiest shipping lanes in the world. I cannot deny I was somewhat entertained by these extremely large ships! The pilots know the exact positions of these ships so I could comfortably take in the views of them passing when breathing bilaterally. These ships were all moving from my left to right and the less I saw, the more I was thinking have I made it to the next zone called the separation zone. The hot sun on my back and the marginal wind made me feel as though I was in a swimming pool at times. One of the main differences is that in a swimming pool I do not have jellyfish for company. I could see a lot of jellyfish and as I looked up to the boat as I breathed, all 5 of my support crew were looking down into the water. My mind was thinking it best just be jellyfish and nothing bigger. I seemed to be so focused that day, that even when the jellyfish caught me on my face, right arm, and left leg, I decided that the equivalent of a nettle sting was not going to beat me today.

I began approaching the separation zone and was wondering if I would be able to distinguish my location. The crew kept me updated during feeds, but there are all sorts of discussions about the separation zone that are not all that pleasant. It is known as the central reservation of the Channel, where only the small fishing boats and ferries cross. With such a reduced flow of traffic, there can often be a build-up of various substances. During my swim, the main obstacle I encountered was seaweed, which although I needed to pull off my head and neck, could have been a lot worse.

In my mind, reaching the separation zone suggested I was around halfway between England and France. That is true, but with the tides changing, it does not mean you have the same amount of time to then reach France. The ebb tide began and although I kept swimming strongly, I was being pushed west with some southerly progress. The northeast shipping lane was a tough section and what I had not quite realised was it was not as simple as going perpendicular. It was much more of a diagonal direction which seemed like a lifetime. You can see France by this point also, which is so difficult because it is still a long way away.

Due to the strong progress I made in the first half of the swim, plus the ebb tide, I stayed east of the ZC2 buoy. In fact, I did not see it at all. This buoy is 3 miles from France. Having not seen it, I started to wonder where I was and if I was going to make it. On my next feed, which was thrown to me attached to a dog lead, I was told I was soon entering the French inshore water. I really wanted to kick my legs harder, but my hip flexors were so sore. I kept my arms moving and although I should not have done so, I kept having a little glimpse ahead to see whether I would hit the beach or rocks. Knowing how sore my legs were, I was not sure rock climbing was going to work! A little while later, I saw the pilot getting the dinghy into the water and that was when I knew we were close. The dinghy escorts you the last part when it is too shallow for the boat. Even when you are within the last kilometre, every stroke counts to get you to the beach.

After 12 hours exactly, I reached France. A little unsteadily, I cleared the water and soon laid on my back taking in the warmth of the pebbles beneath me and looking up to the sky. In that moment, all I could think about was all of the support and encouragement I have received in the build up to this challenge and how fortunate I am.”

If you haven’t donated but would still like to, visit the JustGiving website to donate to Cancer Research UK and Canterbury Welcomes Refugees.

“Last year, I had my first taste of what it is like to swim the Channel. I completed the Channel as part of a 4-person relay. The conditions were perfect. Glorious sunshine and calm sea. There are not many days you will see zero waves across such an expanse of water. It took us 11 hours and 32 minutes before we stepped foot on French territory.

There have been some heroic attempts to cross the English Channel in years gone by and to say that the history of the Channel fascinates me is an understatement!

In July I will be attempting the swim on my own, with the support of a boat and crew called Masterpiece. I will have a couple of coaches and friends on the boat also, who I know will encourage me through the good and tough sections of the swim, feed me at regular intervals and most importantly, check that I am safe and not getting too hypothermic.

One question I have been asked a lot is why? Why this challenge? I never thought I would ever get the opportunity first and foremost. We all have different body types and for me, swimming comes a lot more naturally than running. I have always said I would rather swim the Channel than run a marathon and hopefully I will be able to attempt this in July.

Another reason, like many challenges we do, are often in memory of people who have inspired us. I grew up with swimming and swam with a club; Whitby Seals. One of the club members, Nora Swales, supported me with my swimming and would always come to the galas. As a child, we swam in the River Esk, and my competitive edge would always get the better of me. Chasing down fellow swimmers and coming out a shivering wreck! Nora took me home and made sure I was able to talk again! Nora volunteered so much of her time to teaching young children to swim and sadly we lost her to cancer. When this swim gets tough, I will be thinking of her, and others who have battled through cancer. I would like to raise money for Cancer Research UK.

I would also like to raise money for Canterbury Welcomes Refugees: http://www.canterbury-refugees.com/. Up until swimming last year, I did not fully grasp the distance and unpredictability of the Channel and how people are risking their lives every day crossing the Channel. It made me realise how lucky we are not to start or experience such difficulties in life. This charity supports Syrian families with language support, housing, employment support and much more which can indescribably change lives.

Many people have dipped their toes in the sea over the winter months due to the pools being closed and although the thought of getting into the water when the temperature is less than double figures, it honestly is a brilliant feeling once you come back out!

Preparation has been less than ideal, but that makes the challenge even more exciting and unpredictable. Spring of 2020 brought warm weather in April and May, however, this year we seem to have seen rain, wind and snow for so much longer!

In order for the attempt to be official, you must register with the Channel Swimming Association and have an observer on the boat who makes sure that all rules are followed. This includes wearing one costume, one hat and goggles. You must not touch the boat at any time and feeding requires a coach to throw the food and drink towards you but not touch you. It is very strict, but this way it is the same for everyone attempting the swim.

And finally, please donate to these wonderful charities if you can.