Student Beth who has interned with KET as their environmental champion has been looking at the importance of insects and got practical by building KentCOG’s first insect hotel.

The importance of insects and providing them with a home
Every insect plays a role in the ecosystem in which it is found. The essential act of pollination is most commonly carried out by bees and butterflies; however, some ants, flies, beetles and even wasps contribute. When an insect lands on a flower, some pollen is transferred onto its body from the stamen (the male part of the flower). This pollen is rubbed off onto a different flower of the same species, where it can fertilise the stigma (the female part) to produce seeds. Some plants are capable of self-pollinating or being pollinated by seeds in the wind, however, a majority cross-pollinate as described. Therefore, the continuation of most plant species is dependent on these insects. Not only is this important for wildlife habitats, but also for humans, who rely on effective pollination for food. Due to habitat loss, insecticides and climate change, bee and butterfly numbers have been declining for years. It is therefore important for humans to aim to reduce the damage – one way of doing this is by providing areas where they can lay their eggs.

From a gardener’s perspective, pollination is necessary, but so is pest control. If a gardener wishes to be mindful of bees and other wildlife, as well as health concerns, they may be averse to using pesticides. Fortunately, there are various bugs which feed on unwanted insects and these can be purchased or encouraged into your garden by introducing their preferred breeding environments. The larvae of lacewings are well-known to devour aphids, also known as greenfly or blackfly. Aphids are one of the most destructive pests in gardens, as they weaken plants by sucking their sap, feed on their leaves, can transport plant viruses and cause the growth of sooty moulds. Insecticides are often ineffective at removing aphids anyway, but in addition to lacewing larvae, ladybirds and crab spiders eat and so control aphids. Ladybird larvae and adults also feed on other pests such as mealybugs, mites, thrips and scale insects. Minute pirate bugs, syrphid flies (hoverflies) and damsel bugs all contribute to pest removal as well.

The larger ground beetle feeds on larger pests such as slugs and cutworms as well as insect eggs. Each of these useful creatures has a preferred environment to breed and live in. So, a diverse range of bugs in a garden can facilitate the growth and maintenance of plants. In the case of food-yielding plants, this can mean a larger production of fruits and
vegetables. KentCOG would benefit from this, as more produce can be sold to raise money, or more garden participants can benefit from their efforts by taking home food. An ‘insect hotel’ can encourage these beneficial bugs
by containing different environments which provide them with a home and breeding-ground. This may be especially useful in the colder months when insects search for a warm and dry place to burrow or hibernate.

Materials and insect preferences
Materials for a hotel can be collected from nature or be recycled items. When arranged properly, they can provide the perfect home for specific insects.
• Bark attracts centipedes, beetles and spiders in addition to woodlice and millipedes which contribute to the system of recycling in a garden.
• Broken plants pots and bricks and drainpipes can add to the structure and provide more space for burrowing.
• Dead and rotting wood provides a home for beetles, centipedes, woodlice and fungi.
• Hollow stems, bamboo and holes in wood make a great environment for solitary bees to lay eggs on the sun-catching side.
• Pinecones give refuge to ladybirds and lacewings.
• Straw, dried grass and dry leaf litter give ladybirds a place to hibernate over winter as well as other insects a place to burrow.
• Wood chippings or rolled cardboard inside a plastic bottle provides an ideal home for pest-eating lacewings.
• Hedgehog boxes and stones and tiles for frogs and newts can be added if you want to attract even more wildlife. These larger animals eat slugs and other pests in the garden.

Tips for building an insect hotel

My project
The idea to build an insect hotel during my placement came from research that I had carried out beforehand. When I arrived at KentCOG, I saw lots of materials that had the potential to be recycled to create the environmentally friendly project. Just after the entrance to the garden, there is a large pile of relatively healthy scrap wood. I saw two structures that resembled wooden pallets as well as four draw-like boxes which would be perfect for assembling the base and structure. After checking that there would be a substantial amount of materials around the garden to fill the hotel and correct tools to build it, I began construction.

On the first day, I lead two volunteers, Hannah and Matt, and we created a base for the hotel. We sawed 4 small pieces of wood and nailed them into the corners of the first ‘pallet’. This provided balance for the second ‘pallet’ that we nailed on top. The nails that we used were largely rusty and old and so unusable for larger projects, however, they worked great for the hotel, which created another means of recycling through them. Mirelle showed us a shady, concealed spot to place the hotel and we used spades to level out the ground. We then installed the base onto the clear spot. As there were no volunteers available on the second day, I worked mostly by myself. I began by collecting rotting wood from a large container in the garden, which contained old, disused blocks, logs and tree cuttings. I also found some fresh tree branch cuttings. I organised these pieces of wood into the base as they are the heaviest components and will help to steady the structure. Using long, thin planks of wood found on the scrap wood pile, I made a steadying platform for the second layer, on top of the base. Gemma helped me to hammer out two sides of the boxes from the woodpile, so that there would be an opening at the front and access to the middle. Once I had secured the boxes with discarded string and nails, I began searching for materials to fill them with. Some volunteers had recently cut and collected small branches and twigs from the trees surrounding the garden, so I asked them to leave them out for me to use. When I was sure that they were dry, I placed them into the
centre space of the layer. The grass had also been cut within the past week and it was very sunny, so it had dried out and become like hay. I gathered some of it and put in the back two areas of the boxes. Lots of bark was laying around in the garden, so I picked up enough to fill another space in the layer. The last area in this layer contains three different components. I found some disused bamboo sticks in a polytunnel and so I sawed and broke these up to fit in the box. Next to these is a plastic bottle which a volunteer had used the day before. I saved it, dried it out and filled it with wood chippings found in the rotting wood pile. The last items in the box were found in the tool shed. They are old, plastic tube coverings for tree saplings, which had not been needed for a long time. I broke these up to
fit and filled the back-facing ends with more grass-cuttings. To fill the empty space at the back of this section, I used some of the smaller material in twig collection pile.

Another two thin planks gave a platform for the next layer of boxes. Some bush-craft days had been run in the open space adjacent to the garden and consequently, there were a few piles of leaf litter. I collected some of it into a box with all four sides intact, to give some extra shelter and warmth. The last box contains five more of the plastic tree coverings, again with grass cuttings in the ends. Empty spaces were also filled with the cuttings, which helped to keep the tubes in place. The back of the boxes and fence behind the hotel keep it relatively enclosed and will provide adequate shelter. Finally, I discovered a board with one laminate side in the scrap wood pile. This was perfect for a roof, as it was the correct size and will provide some rain protection. I placed this on the top layer and weighed it down with semi-rotting logs that I found all around the garden. My final step was to place the large log right in front of the hotel, to steady the ground, as it was on a slight mound. It could also provide a seat for anyone wanting to have a
look at the creatures living inside. I cleared out some of the prickly plants and loose grass in the surrounding area, to
accommodate any visitors. 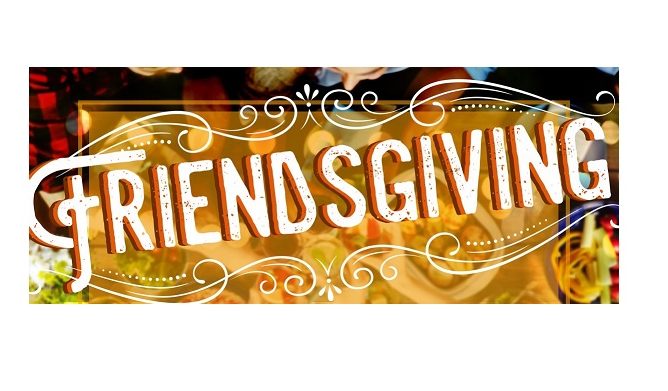 Join the community and celebrate a classic American holiday by gathering as friends to share thanks and giving with seasonal beverages and snacks!

No reservations required, but contributions via donations to the space or autumn treats for the event are always appreciated!

First timer? – Come and learn about ways to get involved!

Organized by American students at the University of Kent