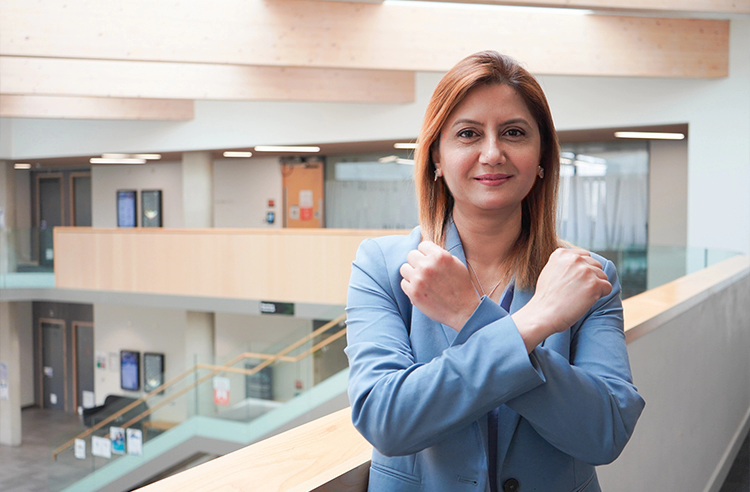 Fauzia Idrees is studying an MBA at Kent Business School and is one of our Women in Leadership Scholars.  She was the first female PhD student to serve in the Pakistani armed forces, where she had a 22-year career in the Air Force.  She now runs her own cybersecurity consultancy firm and is President of Women in STEM. She aims to employ an 80 per cent female workforce.

“One of my strongest memories as an engineer and leading officer in the Military was during an emergency. Since there were no women in technical areas at the time, they were explicitly not allowed to enter such areas. There were even signs around the place saying, ‘Ladies are not allowed’.

I rushed to the site in plain clothes as there was no time to spare during emergencies, as I tried to enter, an aggressive guard shouted: ‘Ladies are not allowed, can’t you read?

“I am not a lady – I am an officer,” I responded, resolute. He took one look at my ID and let me in. I was never questioned again.

Being one of seven growing up in a remote area of Pakistan, girls weren’t encouraged to learn. My parents were uneducated, but they were also visionaries. Seeing something in me – my skills for numbers and a drive to learn – they sent me to school and later to college to study engineering – an institution where I was the only girl amongst 200 boys.

The local villagers would judge them, but they never faltered. They were good, likeable people and soon won over neighbours to accept that they wanted a different future for me, not one that involved cooking, cleaning and childrearing alone.

I, on the other hand, was painfully shy. Many mornings I would sit and cry, thinking ‘I can’t do this’. But, eventually, quietly and in my own way, I began building the strength of character that would send me on a very exciting journey.

After gaining my qualifications, I first taught at a local University then, in 1997, I was accepted into the Air Force as an engineering officer. During my service, I was sent to the UK to pursue my PhD in Information Security, this made me the first female in Pakistan’s history to be offered this chance.

Everywhere I went I was the only female. At the beginning there was a lot of discomfort and unwillingness from my male counterparts, but with the patriarchal nature of our society at that time, it was understandable. It didn’t take long for me to be accepted as simply part of the team.

My role was mainly technical maintenance on fighter aeroplanes, but I was also responsible for communication and networking at the time when Pakistan was fighting the War Against Terrorism.  That was a very challenging role – one mistake could have big implications.

I remained in the armed forces in various capacities over 22 years. Often, I was one of few, or the only woman. That shy girl, who was lacking in confidence, slowly drifted away. I thrived by being myself and doing what I loved.

When I left in 2019, I started my entrepreneurship venture in cybersecurity solutions – putting my learned skills into something I could call my own. My business, Cynosure Technologies is a tech venture focussed on cybersecurity consultancy. I also worked as Director at the Business Incubation Centre in Dawood Engineering and Technology University before starting my MBA at KBS.

I took an MBA at Kent Business School to develop skills in Marketing and the commercial side of business. I loved the entrepreneurial side of the course and how innovative it is and am in awe of the educational establishments of the UK. I was offered scholarships in many institutions to study, but I chose Kent.

I use my business to empower women. Many women that I have met along my life in Pakistan had qualifications and skills, but they are not actively encouraged to get jobs. They had babies and had caring responsibilities, and nothing was ever offered to them that meant they could balance a career with this.

In my business, I aim to employ an 80 per cent female workforce. I started the model of working from home in July 2019 when Covid hadn’t hit and it wasn’t commonplace. Many of my workers have small children, they needed to balance things. No one believed I could ever make this model work and look at us post-Covid, so many of us are working in a hybrid way!

To break the bias, organisations should give leadership roles to women. In Pakistan when we got our first female Prime Minister, that was when I got that chance in the armed forces. If you empower women and give them leadership roles they will flourish.”

Fauzia is undertaking our AMBA-accredited MBA. The course is underpinned by our high-quality research and informed by the global outlook of our international community. It builds on your current experience to transform you into a responsible business leader.

Imagine a gender equal world. A world free of bias, stereotypes, and discrimination. A world that’s diverse, equitable, and inclusive. A world where difference is valued and celebrated. Together we can forge women’s equality. Collectively we can all #BreakTheBias.

3 responses to “International Women’s Day: Breaking the Bias – The Force of Nature”