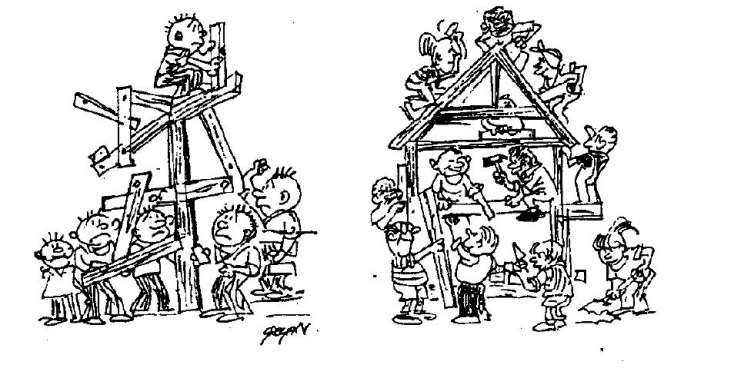 What happens when you sit twelve owner-managers, in a hierarchical fashion, in a room, separated by screens, don’t allow them to talk to one another and task them with solving a puzzle that they all hold part of the answer to?

As part of the BIG Network session on The Foundations of Success in Working Together we raised the question: how should we design our organisations? To explore this question we structured an exercise that enabled participants to experience, and explore the role structure plays in creating organisational environments where people can work well together and achieve success.

Setting up the exercise

The exercise [1] was simple enough; the participants could only communicate by written messages, and the leaders were given a task which required collaboration, throughout the whole system, for a solution to be found.

Two groups (i.e. organisations) of five people were split into three role areas that would be typically found in an organisation:

And we also had two observers, and two messengers to deliver the written communications.

Interestingly, the two groups approached the set-up of the activity differently, with one consulting how to apportion roles, and the other choosing a more individualised, ad hoc approach.

What happened – an overview of individual and systemic response

To begin with, the leaders started considering the problem and everyone else sat reasonably still, however, before long boredom and frustration led to the employee groups taking some action.

One of the middle managers announced their resignation! Both managers by this point had a mountain of notes to deal with. Of the employees, some were passing the time by writing playful notes, some had resigned themselves to a pleasant daydream, and for others the sense of frustration and boredom was palpable.

One group achieved the task (which happened to be the group who discussed roles at the beginning) while the other progressed for a further 5 minutes and finally time was called. We then debriefed what had happened, how and why.

Observations – in the shoes of the leader, the manager and the employee

In debriefing the exercise a range of observations were made, these were:

On reflection, all participants agreed the task could have been done better, the team organised better and yet, the whole thing was eerily reminiscent of organisational life. Sometimes confused, often lacking in clarity and even, at times, chaotic, stressful and not a place we wanted to be. However, success was possible, planning and preparation seemed to be a part of enabling that success however, it was clear that whenever multiple data flows through a single source, things get messy!

The literature – what it says and how this informs our understanding

What the literature tells us is that strategy and structure need to work together, to be as aligned as possible to allow for effective decision making, communication and all round optimum performance. Simply ‘restructuring’ can cause more harm than good, however, designing organisations to allow for the critical decisions to be made in the most effective manner and by the right people does lead to organisational improvements, growth and success [2].

Smart companies create structures that mesh individuals’ capabilities with the organisation’s decision-making demands and they also invest as needed to ensure that people have the skills required to be better decision makers over time.

So the question is not necessarily; “do we need to restructure”, rather it is, “how could we be structured to optimise communication, awareness and decision making?”

Working this out, or continuing to explore this, is a strategic imperative for leaders; and not one with simple answers! However, having people literally or metaphorically sitting facing the wall is definitely not part of the answer.

Make a Difference (MAD) challenge from this section: In reading this section, we would ask that you reflect on the following questions:

To read the introductory blog that forms part of this series on “The Foundations of Success in Working Together” click here.

For further information on the BIG Network or any of the Business, Improvement and Growth (BIG) programmes for ambitious owner-managers, and their teams, please get in touch with Simon on 01227 824740 or S.O.Raby@kent.ac.uk

[1] The exercise was adapted from a team exercise experienced through a FIRO-B Qualifying Programme provided by OPP, to model the way control plays out through a traditional organisational hierarchy.