Central Africa and the Making of the Global Nineteenth Century

This project will investigate central Africa as a focal point for the making of the modern world. Capitalising on the emergent methods of the digital humanities and global history, it will examine central Africa’s principal axes of global interconnection and the influences that flowed through them before the imposition of formal European control from the 1880s. The project will supplement existing studies of the long-distance slave and commodity trades by investigating the formative impact of central Africa’s consumer demand on international economies, alongside local political responses to globalization.

A central pillar of the project will be the creation of a database of central Africa’s long-distance trade: ‘Sinews of Globalization’, covering the area stretching from the Limpopo and Orange rivers in the south, up to the northern Congo basin. 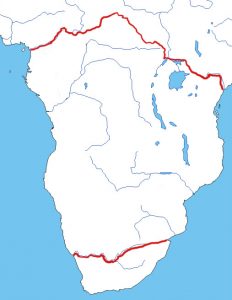 Figure 1. Africa, showing region to be covered by ‘Sinews of Globalization’.

The raw data for ‘Sinews of Globalization’ will be extracted from nineteenth century publications, in particular the accounts and travelogues of explorers, hunters, missionaries and administrators. In general terms, the purpose of this database is to integrate these diverse records, allowing the user to search down to the level of individual records, but also use the accumulated data to look for connections and patterns that would otherwise be less than obvious. (An example of how data can be extracted from the source material can be found here: Support document – Concepts for the database (1)). A suitable search interface will permit users to search by record type, date range, sources, geographical region etc. More important to the database, and its accessibility, is the ability to represent the data on a map using Geographic Information System (GIS) technology.

Some of the database’s potential applications are illustrated by the following ‘mock-ups’. 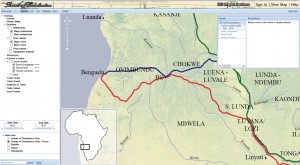 Map 1 is intended to show how portions of the journeys of Serpa Pinto, David Livingstone and Verney Lovett Cameron might be represented by the ‘Sinews of Globalization’ GIS implementation. Many of the basic features shown here, such as the pan and zoom controls and the map location indicator, are self-explanatory. The panel on the left shows an expandable list view and key of the available ‘Overlays’ corresponding to the date range 1851-1879 and selected map area. 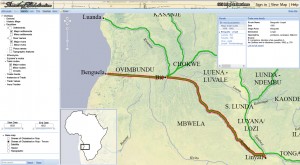 Map 2 shows a series of trade routes in the same region, those classified as ‘Major Routes’ in the ‘Overlays’ panel on the left. Many of the features and selections are similar to those shown in Map 1, but the alteration of the date range and selection of overlay is reflected on the maps, and in the ‘Results’ box in the upper right. In this ‘mock-up’, the user has selected the route highlighted in red. 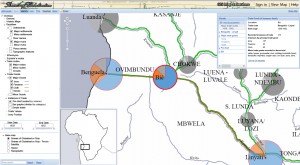 Map 3, the most complex of the series, displays some data precisely as is done in Map 2. However, in this instance, further ‘Overlays’ have been added, showing both ‘Trade Goods’ (ivory, firearms and cloth in this case), and ‘Instances of Trade’ (represented by scaled wheels/pie charts). A simple ‘Base Map’ has been selected for ease of comprehension, and the data relating to unselected trade routes returned by the search criteria are greyed-out for clarity.

Professor Fransjohan Pretorius (University of Pretoria), ‘Jan Smuts in the Boer War: The beginning of his sanguine years’ 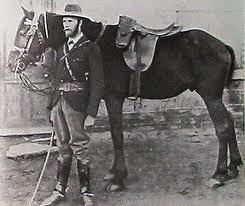 On 16 October 2015 Professor Fransjohan Pretorius (University of Pretoria) will present a paper entitled ‘Jan Smuts on the Boer War: The beginning of his sanguine years’. The presentation forms part of the Centre for the History of Colonialisms’ occasional seminar programme and will take place at 5pm in Rutherford College, seminar room 5.

All are welcome to attend. 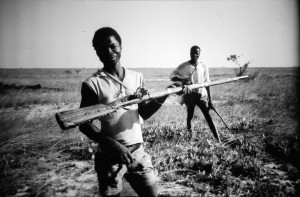