Peter Riley’s latest book is Due North (Shearsman, 2015). A
collection of his “Poetry Notes” columns appears in The Fortnightly Reviews: Poetry Notes 2012-2014, published in 2015 by Odd Volumes. He is the author of fifteen books of poetry including The Glacial Stairway (Carcanet, 2011). He lives in Yorkshire and is the recipient of the Cholmondeley Award for Poetry. 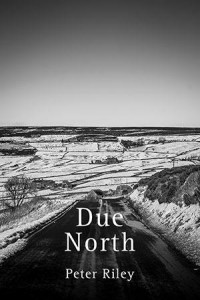 Due North, a fascinating collection of philosophical landscape poems that present the reader with a series of images
of people walking on earth, travelling away from home; of returning soldiers, of those going out and coming back. In the Cordite Review, Mark Dickinson writes ‘One of the ways in which poetry functions within this paradoxical environment is to return to the body and to simply walk out into the world. By being in the world, through an intimacy of a thorough immersion, the poetry can radically re-engage with otherness and begin to propagate alternative ways of seeing and occupying place.’ This is precisely what occurs in Due North. The thematic continuity is autobiographical; the writing began on the eve of Riley leaving Cambridge for Yorkshire. These poems are concerned with the North of England, but more broadly with walking, how people travel though different atmospheres, cultures, how ‘things stick to your coat’. The journey is through landscape; people negotiating and moving through worlds. As Riley writes: ‘what clings to us, also falls off us.’

This isn’t the first time Riley’s work has focused on landscape: In his letter to Tony Baker dated 1991, Riley considered the impulse to include notes in his collection Alstonefield, ‘And a writing was needed, an interlinear commentary, to work the self through the fairground of its purpose and throw a shadow image back to all the rest of the known.’ (Riley, 2003, 2) These notes provide access to the author’s mind through sources and citations. Riley’s commentary in Alstonefield was a necessary supplement and offers a more thorough engagement with landscape, but common adoption of referential or explanatory footnotes risks devaluing the importance of the reader’s freedom and struggle for meaning. In Due North, language and themes are not all tied up, but instead hold echoes of things already said. Riley’s intention was to allow those echoes to continue through the whole piece, and yet the language and themes are often embedded elsewhere. This brings to mind a passage from Riley’s essay “The Creative Moment of the Poem” (Poets on Writing): ‘The poem is neither transparent nor opaque but itself a body of light. It conceals because it supersedes the light before and after it. And in this concealment it also carries: images, concepts, percepts, messages across a time gap.’