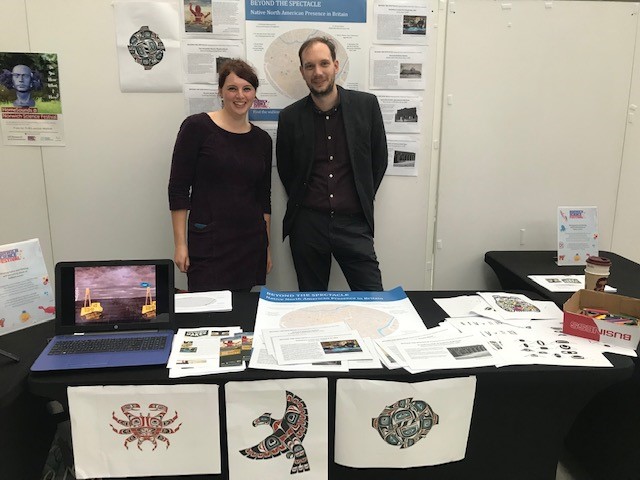 In October, Jack Davy and I took the opportunity to share ‘Beyond the Spectacle’s research on Indigenous American presences in Norwich with visitors to Norwich Science Festival.

In the heart of the Festival at the Millennium Library in the city, the ‘Beyond the Spectacle’ stand was positioned between a virtual reality headset, a stand on audio ecology, and an AI robot. We brought a vibrant humanities bent to the Festival’s Technology Day. Using our Norwich walking tour on the PocketSights app, we showed visitors how GIS (Geographic Information Systems) can be used to present historical information. As well as learning about GIS however, visitors were surprised and interested to discover just how many Native American and First Nations people have been to Norwich. Many of the people we talked to had lived in Norwich all their lives, and were intrigued to find out that Native people have visited and even performed at well-known local venues like the Theatre Royal, St Giles Church, St Andrews Hall, the Quaker Meeting House, and on the Jenny Lind hospital site when Buffalo Bill’s Wild West Show was in town.

As well as revealing some of Norwich’s hidden histories to visitors, we invited them to play Elizabeth LaPensée’s (Anishinaabe, Métis) Thunderbird Strike video game. Players take the role of a thunderbird, charging up their lightning power either to destroy oil pipeline infrastructures (from the Tar Sands to the Great Lakes region) or to bring the skeletons of animals and people back to life. Finally, the player battles a huge snake – an anthropomorphised oil pipeline. Younger visitors were immediately attracted by the prospect of playing a new game, and it provided a way to talk about Indigenous American environmental activism. They were very engaged and aware of the environmental impact of fossil fuels but didn’t know about the effects of oil extraction on Indigenous lifeways. This fed into discussions about the game itself, in which players can’t harm any living creature, but instead choose to use their power to destroy objects or revive animals. The thunderbird is also immortal, and many younger visitors were confused by the absence of a health bar. Talking about the gameplay therefore allowed us to teach younger visitors about Indigenous ontologies, and to encourage them to question the ingrained assumptions in the games they play every day.

Inspired by Sonny Assu’s (Ligwilda’xw Kwakwaka’wakw) residency at UEA this summer, we provided our very youngest visitors with Northwest Coast formline drawings to colour in, with vibrant results! Children and their parents enjoyed trying to spot the hidden elements within drawings of ravens and bears, and many planned to visit (Un)Named Maker, Sonny’s exhibition at the Sainsbury Centre for Visual Arts, which is open until January 2020.

We had some fantastic and informative conversations with visitors throughout the day. A practising artist picked out similarities between Northwest Coast formline and Indian folk art, taking away some drawings to inspire her own work. A visitor with an interest in labour history suggested talking to local unions about how Native people who were part of the temperance movement might link to historical working men’s education in the area; and an amateur curator and tour guide challenged us on how we address cultural appropriation in the project itself.

Taking part in the Science Festival was an invaluable learning experience for ‘Beyond the Spectacle’ team members, challenging us to think about how we can best communicate the complicated and often difficult histories of Indigenous visitors to members of the public in the UK. This year, the Norwich Science Festival aimed to engage people with science, who might not otherwise have access to it. With an average of 15,000 visitors per day, it was a brilliant opportunity for ‘Beyond the Spectacle’ to make our academic research accessible to the public.

It was so rewarding to teach people something new about their local history – most visitors had no knowledge of Indigenous peoples of North America beyond Buffalo Bill or Disney representations. It was therefore very powerful to be able to name, and even show pictures of individuals who had developed relationships with local people, like Gowongo Mohawk (Seneca), who recruited local actors to perform in her play Wep-Ton-No-Mah (The Indian Mail Carrier) at the Theatre Royal, and Akenawaka and Tomapamelaut (Delaware), who spoke passionately against alcohol at St Andrew’s Hall and the Quaker Meeting House. We were also able to communicate the vibrancy of contemporary Native culture by talking about present-day visitors to Norwich, including Sonny Assu, and cultural and design consultant and performer Sierra Tasi Baker (Coast Salish, Tlingit, Kwakwaka’wakw, Haida and Hungarian), who we interviewed in Norwich in summer 2018, when she was visiting the UK to open the new World Galleries at the Horniman Museum.

We were delighted to draw to the ‘Beyond the Spectacle’ stand diverse members of the public from across the generations. Half term meant that large numbers of children were able to dispel the stereotypical image of the feather-bedecked warrior astride a pony, by creating their own formline art in the tradition of the Northwest coast Indigenous peoples.

We would like to thank UEA students Laura Ali and Holly Steele, who kindly volunteered their time to help staff the stall, and Natalie Bailey and Jan Robertson of the Forum for their enthusiasm and help in giving ‘Beyond the Spectacle’ space at the Festival.