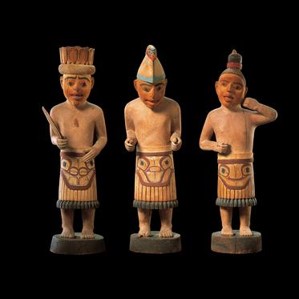 One of the most important ambitions of Beyond the Spectacle is to improve access to Native North American educational and cultural resources in Britain. It is to this end that we are developing an archive of documents and interviews about first hand experiences of Native travellers, and collaborating with public institutions, such as the British Library and the Sainsbury Centre for Visual Arts, and private partners, such as Rainmaker Gallery in Bristol, on programmes of public education and exhibition.

There are however substantial resources largely unknown and unremarked upon in the collections of museums across the United Kingdom. Some of these, like the widely exhibited collections at the British Museum or the National Museum of Scotland, appear in large well-appointed galleries with accompanying online catalogues. Less well known, but no less important however are the collections housed and displayed in Britain’s smaller regional and local museums.

Developed over the last two centuries as repositories of public collections and knowledge, these collections are reflective of the long colonial, commercial, and cultural legacies between Britain and its former colonies in North America. They also include discreet collections which reflect the social and cultural circumstances of particular times and places which have not been preserved anywhere else. Examples include the Sir Julius Brenchley collection at Maidstone Museum and Art Gallery, and the Horatio Bland collection at Reading Museum, each of which illustrate specific Plains cultures at particular points in the turbulent nineteenth century.

To improve access to these collections for both Native North American visitors to Britain and for British audiences at home, Beyond the Spectacle has recently begun a highlights programme on our website which lists some of these lesser known collections and illustrates a few star objects from their displays. Most importantly, the website provides access to whatever collection databases are available, and contact information so that those wishing to visit these collections can speak to curatorial teams directly and ensure that what they wish to see is accessible.

We’ve begun with a pilot study which encompasses five museums from the South East and East Anglia, where our home universities are based. Over the next two years, we hope to roll out across the country, listing museums from the South West and Wales, the Midlands, the North of England, Scotland and Northern Ireland. The survey won’t be comprehensive, providing only a brief glimpse of a fraction of the Native North American collections held by the regional museums of Britain, but it will hopefully generate an awareness and insight into the number and importance of these collections.

This is only one part of Beyond the Spectacle’s engagement with the UK museum sector; plans for close collaborations, symposia and publications on improving access and engagements with these collections are underway (some indeed have already taken place!), and our hope is that at the end of the project we will have made a substantial difference to the treatment and availability of Native North American material culture in British museums.

If you are a visiting Native North American trying to access collections, or a British enthusiast for Native American material culture, or indeed a museum worker looking to better publicise your collection, please do get in touch, we would love to hear from you and see if we can work together.

Note: If you are contacting a museum with regard to their Native North American collections, please do ensure you do so well in advance of a visit. Museums are complicated organisations and all too frequently faced with budget restrictions. The earlier you get in touch, the greater the chance that they will be able to accommodate your request.

2 responses to “Native American Museum Collections in the UK”