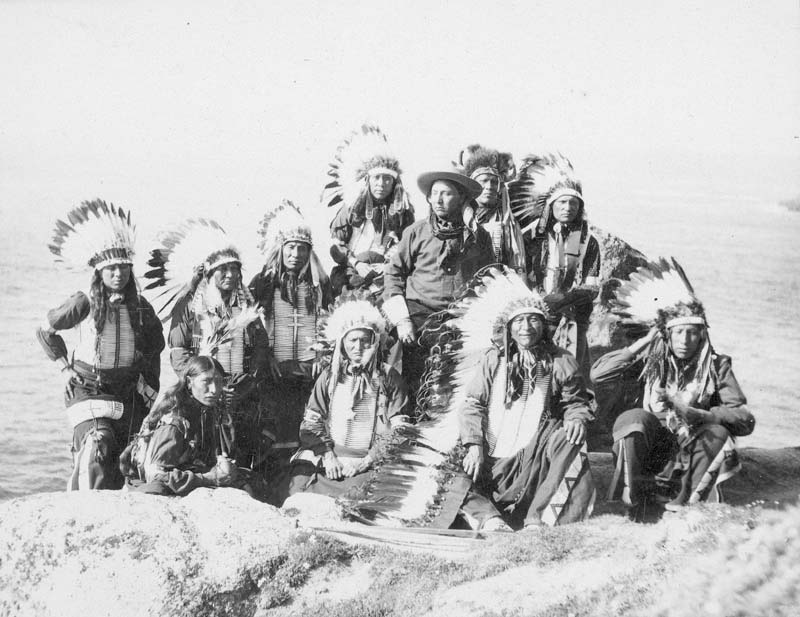 While the ‘Beyond the Spectacle’ team is comprised primarily of scholars and practitioners of history, literature, art, and museum studies, in many ways it is actually geography which provides the unifying strand to our research. In order to present a truly compelling picture of Native North American presence in Britain over the past 500 years, as we seek to do, the question of ‘where’ is as important as questions of ‘who’, ‘why’ and ‘when’. It is therefore necessary to locate that presence in a conventional geographic sense, to ground it in the co-ordinates of a map, thus allowing us to set the scene for the stories which every Native person who has travelled to Britain has to tell.

It is certainly true that each and every one of these stories is very intimately linked to a place or, more often, to a series of places, across the British Isles. And it is these places which are so central to the accounts of Native North American visitors to, or residents in, Britain. They serve as more than just a backdrop to these accounts – often providing creative inspiration, topics for discussion, and an opportunity for greater understanding and cultural exchange. Geography may serve to highlight the distance Native North Americans have travelled to reach Britain, but it can also emphasise familiarity and affinity, through a shared landscape and global environment.

One of the challenges facing the ‘Beyond the Spectacle’ team as part of this process is how to present this material in a genuinely interesting and visually stimulating way. This is in fact two separate challenges, as there are two different types of information we are seeking to map out. The first is to give a sense of the number and, perhaps more importantly, the geographic distribution of Native North Americans in Britain across our period of study. The second is to use maps to tell stories by showing routes and generating visual depictions of travel narratives. As we are still only taking our earliest steps with this facet of the project, our attention has been primarily directed towards the first of these two challenges.

The aim is to present an initial visual representation of Native North American visitors to the British Isles and to show, among other things, that these visits did not take place solely in London, or even solely in large cities, but rather throughout the United Kingdom. Every region has its own heritage of Native travellers and it is often in these places, away from the high drama and mass attention of the capital, that it is easiest to look beyond the spectacle and to see how Native people interacted with different local communities, especially in places which perhaps lacked the diversity and cosmopolitanism of major urban centres.

Our first map (the link to which can be found below) has been built using Google Fusion Tables – a free online app, still in its ‘experimental’ phase. Despite this, the functionality is excellent and while it lacks the sophistication to generate more complex geographic representations, it is the perfect tool for turning raw data into a clear and interactive digital map. Currently the map features the first 45 data-points, nearly all of which represent a distinct individual or group (though some do appear more than once). These range from Native performers with Buffalo Bill’s Wild West Show who posed at both Land’s End and John o’ Groats during the show’s 1904 tour, to members of the American Indian Movement who travelled to Derry to show solidarity with the Irish Republican cause in 1985.

Included within this data are the stories of preachers, educators, performers, artists, soldiers, children, diplomats, activists, ‘criminals’ and many others. There are individuals whose notoriety has come to overshadow their reality, such as Pocahontas, and there are others whose stories are just as interesting, if not more so, but who have remained in historical obscurity, such as Pegahmagabow – a prolific First World War sniper and the most decorated First Nations soldier in Canadian history, who spent time recovering from a leg injury in a Bristol hospital in 1916. The earliest data-point dates from 1616 while the most recent dates from 2016 – a 400-year span encompassing an incredible breadth of experiences.

This map is, however, more than just a showcase of the research the ‘Beyond the Spectacle’ team have completed so far. It is also a public call to arms. As our project progresses, we will develop this map further and add many more, including those, as mentioned, which will follow certain individuals or groups over a longer period. Some of the data we need for this mapping can be found in archives or from conversations with existing contacts within the Native community but our hope is that the public can help us to uncover stories from their local area and create maps which truly demonstrate the variety and scope of Native North American presence in Britain over the past 500 years.

To complete this map and the others we plan to make, we need your help.

If you have any information (stories, images, artefacts, recollections, etc.) about Native North American visitors to Britain, please do get in touch and help us put your village, town or city on one of our maps – email us at beyondthespectacle@kent.ac.uk.