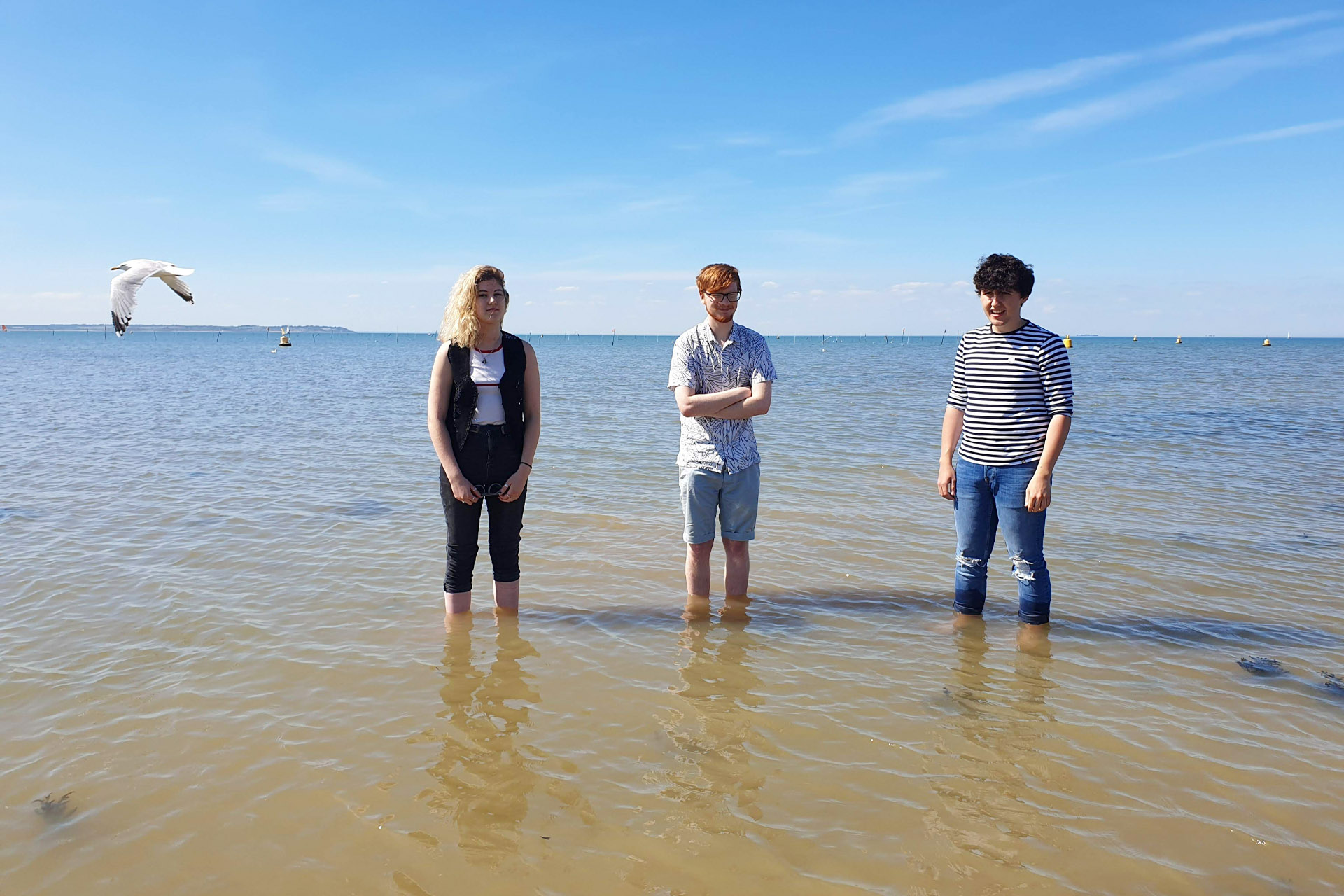 MA Film with Practice student, Joshua Mitchell and third year BA (Hons) English and American Literature and Drama student, Amy Tokel took part in a live chat with Head of Music Department, Daniel Harding, regarding the release of their band, HollowHead’s, latest EP during lockdown. We caught up with Joshua and Amy to find out more.

How did HollowHead come about?

Amy: HollowHead is made up of Joshua, Craig and I who met through our previous band. When that band came to an end we got together and began experimenting with different genres and unexpected song progressions. I am the drummer and singer, although we do mix it up and swap instruments and lead vocals a lot. We all sing, write and are self-produced at the moment by the bass-player Craig!

Joshua: I’m the guitarist and sometimes vocalist of the band. We aren’t too rigorous about who plays what instrument or who sings – it’s more important that the song sounds the best it can. So if that means Craig is on drums and Amy just sings (like ‘Repeat’ for example) or I play bass and Craig plays guitar (like ‘Bear’) then that’s what we do! It’s definitely a song-by-song basis.

What has been your favourite module on your course?

Joshua: My favourite module so far is Filmmaking 1: Key Skills (mostly because it means I get to write a screenplay that I get to film next year!)

Amy: Studying Drama at Kent has been brilliant for my performance confidence and compliments English very well! My favourite module was last year’s Acting module, run by Will Wollen. I loved learning about different practitioners’ approaches to naturalistic acting and delving into the psychology behind affecting each other in order to create gripping theatre. The Performance Art module I took last year was also particularly interesting in terms of quirky and evocative performance possibilities which could be translated into the gig setting. What’s the inspiration behind this EP?

Amy: This EP draws on so many musical inspirations from System of a Down’s heaviness to hip-hop and acoustic song-writing. As Joshua said, it definitely was scary releasing such an eclectic mix of music on one, self-recorded and produced, EP but the positive feedback we have been getting is more than we could have asked for!

Joshua: I think the EP means a lot to us for a few different reasons. For me, it was a form of resistance against the difficulty and lack of support that the arts industry as a whole has seen during this pandemic. This shows that we were able to beat the odds to record and release our music. And each song means a lot to us – it definitely felt like quite a risk to make our debut EP so versatile and out-there – but we’re so happy with the response that the EP received. Fingers crossed this is the first step to having our first full-length album out in the world, maybe with a few singles to release in between.

What were the main challenges of releasing an EP during lockdown this year?

Amy: I found the main challenge recording over lock-down to be the difference in energy and support when recording alone. It was easy to fall into a rut of recording and re-recording for days on end. Without my bandmates there in person there wasn’t the same supported atmosphere as usual. There was also a lot of trial and error involved which was frustrating but in the end worth-while!

Joshua: Recording in during COVID created a few issues that we had to get around. Firstly, we were only able to practice together when Canterbury wasn’t in lockdown – and that wasn’t for very long! We tried to video call and practice but the delay between us made it impossible. Instead, we sent through different sections of songs we were working on to get feedback from the rest of the band. Then we’d go away and change what we did, and would send it back for more feedback. We kept doing this until each of us was happy with the final product. To record the EP we did something similar. We had to record instrument by instrument as opposed to recording live. This took quite a few tries to get used to but we got there in the end.

HollowHead’s latest EP is available as a Digital Album and as a cassette tape on Bandcamp.