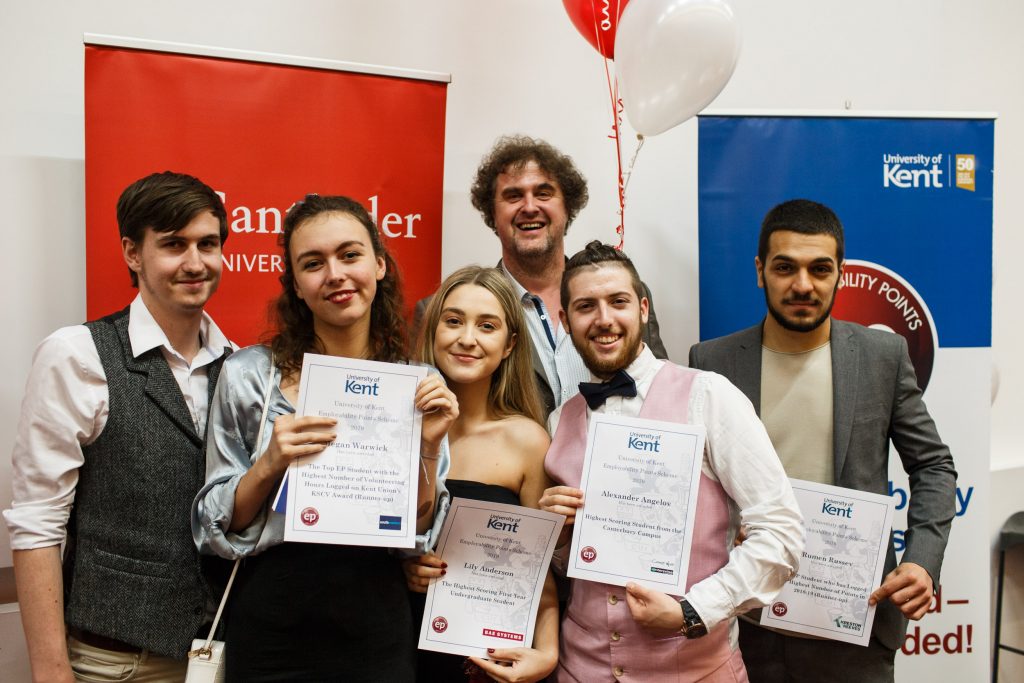 Students from the School of Arts won an impressive haul of prizes this week at the Employability Points Rewards Evening, held on 4 June 2019, attended by many employers and the Deputy Vice Chancellors for Education and Research.

Aleksandar Angelov, currently studying for a BA (Hons) in Drama and Theatre, won the prize for Highest Scoring Student on the Canterbury campus with over 4000 points and the highest total of any student since the inception of the awards 10 years ago. Aleksandar won his points by being involved in a huge variety of activities. This year he became a supervisor of the Spring Calling Campaign, with duties including recruiting, training and motivating callers in order to raise money for the Kent Opportunity Fund.  He has also been an ambassador for the School of Arts, welcoming potential students to the university of Kent and leading tours and workshops. This year, he has continued to progress in his passion for business, undertaking a marketing and e-commerce internship with Nova Décor and attending events organised by the Hub for Innovation and Enterprise.

Rumen Russev, studying on the BA (Hons) in Film with and a Year Abroad, was runner-up for the student with the most points awarded in 2018/19. Rumen is a keen videographer with notable projects including several short films, during which his roles have included writer, director, operator, editor and producer. He worked as a coordinator for a reality show in Bulgaria and cinematographer for the feature film You Won’t Remember Me. Rumen also worked as a film teacher at ‘Cinema Academy’, which involved helping a group of young individuals to create a film over a period of three months and completed a festival internship which involved supervising a team of assistants and organising press events.

Tyler Hamblin and Megan Warwick, who both study on the BA (Hons) in Film, took first and second place prizes for students with the most points won through volunteering. Tyler is a very active member of KTV, in his role as station manager he has undertaken a range of projects as well as directing and writing several of his own short films.  Megan has assisted with Open Days for the School of Arts and is a member of Homeless Outreach as well as taking part in the Kent Union Buddy Scheme.

Lily Anderson, who is currently studying on the BA (Hons) in Film with a Placement Year, won the prize for first year student with the most points. Lily is an enthusiastic member of KTV, having been involved with many productions, including: Tea Time Film Festival Specials, Confessions at Kent, KTV Varsity Lives 2019 and many more.  She also organised and ran KTV live workshop training sessions, helping new members with their editing and camera skills. Roles undertaken during their filming projects include script supervisor, camera operator, producer and director, as well as taking on the responsibility of promoting and advertising the films.

This is a great achievement for the School – there have never been so many prizes awarded to one School before.

Will Wollen, the Employability / Placements Coordinator for the School, said: ‘This is indicative of the fact that we are managing to embed Employability in our School culture. Thanks to all of you, particularly Academic Advisers and Student Support, for promoting the scheme so well.’

More information about the Employability Points Scheme can be found here: https://www.kent.ac.uk/employabilitypoints/