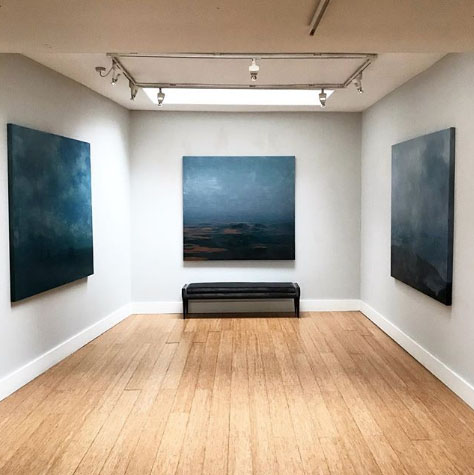 Following the launch of her exhibition at the Cadogan Contemporary gallery, Janise Yntema, who is studying on the MA in History and Philosophy of Art at the Paris School of Art and Culture, was interviewed on BBC Radio Kent last night, 6 February 2019, on The Dominic King Show.

Janise was interviewed about the experience of exhibiting her artwork overseas: ‘I’ve really been pleased to have such a great response. Having shows in different countries is always difficult because there’s shipping involved – and I’m not able to get to the space that frequently – but it’s something that I’ve gotten used to and adapted to.’

She also talked about the technique of encaustic painting. ‘Wax encaustic was actually the first known painting technique. The wax, mixed with resin, was a way to adhere pigment. After prehistoric cave drawings, people realised they could adhere the paint and make paintings,’ she explains. Although the style receded as new techniques were developed, Janise’s work mixes the technique with more contemporary methods. ‘I’ve done a lot of mixed media in the past. With this latest exhibition, I’ve incorporated photography. It was something I was always doing but I never considered it part of my art because I had categorised myself as a painter. [The paintings] are basically hybrids.’

The BBC Radio Kent interview can be heard online, and begins at 29’20” here: www.bbc.co.uk/sounds/play/p06yfmw5