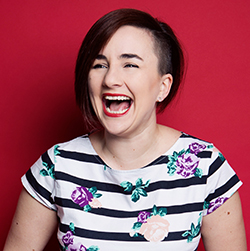 Alumna Laura Lexx, who studied Drama in the School of Arts, will be featuring in the Christmas special edition of Live at the Apollo, which will be broadcast on BBC2 this Saturday 22 December 2019.

Laura studied an MDrama at Kent, specialising in stand-up comedy in her final year.

Reflecting on how her stand-up career has progressed, Laura said: ‘I was chatting with some comics the other day about all the people who have come out of Kent who are now in the comedy industry. They were saying Kent is up there with Oxbridge and Durham as one of the unis where there’s a big crop of current comedians who hail from there.’

Stand-up comedy is a speciality taught by Dr Olly Double at Kent, current teaches on the modules Stand Up Comedy and Popular Performance.

The Christmas special will be broadcast at 9.30pm, and will be available on BBC iPlayer here: www.bbc.co.uk/programmes/b0bx6n1q