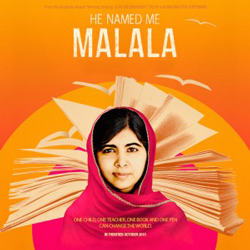 Students from the MA in Curating, in conjunction with the Studio 3 Gallery, have organised a free cinema screening of He Named Me Malala (2014) at the Gulbenkian cinema next week, on Thursday 22 November 2018.

The documentary tells the story of Malala Yousafzai, who was wounded when Taliban gunmen opened fire on her and her friends’ school bus in Pakistan’s Swat Valley.

The then 15-year-old teenager, who had been targeted for speaking out on behalf of girls’ education in her region of Swat Valley in Pakistan, was shot in the head, sparking international media outrage. An educational activist in Pakistan, Yousafzai has since emerged as a leading campaigner for the rights of children worldwide and in December 2014, became the youngest-ever Nobel Peace Prize Laureate.

‘The documentary highlights the efforts in the modern times to emphasise democracy, identity and themes surrounding women’s rights, meanwhile, the film shows the similar influence on women’s suffrage during the ancient period – especially the Age of Revolution period. We chose this documentary to invite audiences to feel the feminine power, connecting with our feminist artist Miss Ponkeno in Beyond the Barricade exhibition at Studio 3 Gallery,’ explained Jiadi Zhang, a graduate from MA Curating.

There will be an accompanying collection for donations for the Kent Refugee Action Network.

The screening will begin at 6.30pm, and more details are available here:
https://thegulbenkian.co.uk/event/he-named-me-malala/