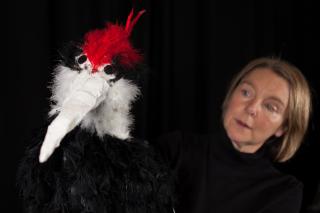 In a Kent research project entitled Imagining Autism, children with autism engaged in a series of interactive sensory environments such as ‘outer space’, ‘under the sea’ and ‘the arctic’. Each environment was designed for them to encounter a range of stimuli and respond to triggers created through lighting, sound, physical action and puppetry.

Using trained performers in each of the environments, the work aimed to promote communication, socialisation, playful interaction, and creative engagement, encouraging the children involved to find new ways of connecting with the world around them.

The research found changes in children’s behaviour, including changes in several areas identified as deficits in autism, such as social interaction and emotion recognition. The severity of autistic symptoms displayed by the children, which were rated by their parents and teaching staff were also found to decrease significantly.

All of the children who took part in the research showed at least some improvements on at least one of the measures used to monitor change during the research, with over three quarters of them showing changes to more than one.

Furthermore, just under one third of children who took part in the project showed significant changes on a measure of social interaction. Substantial changes in children’s behaviour at home were also reported by some families.

The research was conducted in special needs schools across Kent, including one residential school run by the National Autistic Society (NAS). The practical methods used in the project are currently being trialled at all NAS schools across the UK and are also being developed into training programmes for teachers, care workers, families, arts practitioners, and health professionals.

Principal Investigator, Professor Nicola Shaughnessy, of the University’s School of Arts, said: ‘Imagining Autism has been an extremely exciting collaboration producing a number of really interesting outcomes and new discussions between arts and science research. We are delighted that the extremely positive responses to the work from all involved with the project have been endorsed by statistical results.

‘The methods we used in the research have been recognised as having potential for development in the diagnosis of autism, revealing areas of ability, as well as difficulty. The work has also offered insights into the imagination of children with autism and the importance of play-based approaches which can often be overlooked post-diagnosis.’

Unlike previous drama-based interventions, the study employed a variety of assessment techniques, undertaken by psychologists of the University’s Tizard Centre and School of Psychology. These included both formal, psychological research tools, such as the Autism Diagnostic Observation Scale, alongside feedback from teachers and families whose children took part in the project.

Dr Julie Beadle-Brown of the University’s Tizard Centre said: ‘This was a pilot study to explore whether drama based interventions can make an impact on children with autism. We are pleased with the results and believe that this study has provided strong enough evidence to justify further research into the impact of the intervention on children with a range of different needs, as well as research to help us understand how and why the intervention appears to work.’

The methods used were developed by Professor Nicola Shaughnessy (School of Arts) and co-investigator, Dr Melissa Trimingham (School of Arts) – a drama and puppetry specialist who also designed the environments used in the project. The evaluation of the intervention was led by Dr Julie Beadle-Brown (Tizard Centre) and Dr David Wilkinson (School of Psychology).

The project has since been featured in New Scientist and the Independent.