One of the things I was keen to do when I was appointed as Archivist for the British Stand-Up Comedy Archive in January 2015 was to ensure that websites and social media relating to stand-up comedy were being captured and archived. So much of how comedians promote and publicise themselves today, and interact with their audience, is done through social media and websites, and I’ve already noticed that websites referenced in material in the BSUCA collections have already disappeared. I approached the UK Web Archive team at the British Library to see whether I could actively contribute to their mission, and I was delighted that they were happy for me to curate a new Special Collection, to be called the ‘British Stand-Up Comedy Archive’ collection.

Although the British Stand-Up Comedy Archive is based at the University of Kent I’m really pleased that we are working with other organisations and individuals to ensure that material relating to stand-up comedy is (beginning) to be archived for current and future researchers (and others) interested in stand-up comedy. Stand-up comedy has a huge presence on the Web, more so than I can nominate, so I have take two approaches so far.

One focus has been on nominating websites for inclusion which relate to collections that we already have within the British Stand-Up Comedy Archive. For example, I have been nominating the websites and social media accounts of those whose work we have been physically and digitally archiving at the University, such as Attila the Stockbroker’s website and twitter account.  I have also been nominating sites which complement the collections we have. For example, within The Mark Thomas Collection we have copies of articles he has written, but only those which he collected himself. In fact there are many more which he has written which are only available online. The idea behind this approach is that we can ‘fill the gaps’ for researchers interested in those whose archives we have, by ensuring that other material relevant to that comedian/performer is being archived. These websites are provided in sub-categories with the name of the collection they relate to (i.e. Linda Smith Collection, Mark Thomas Collection). 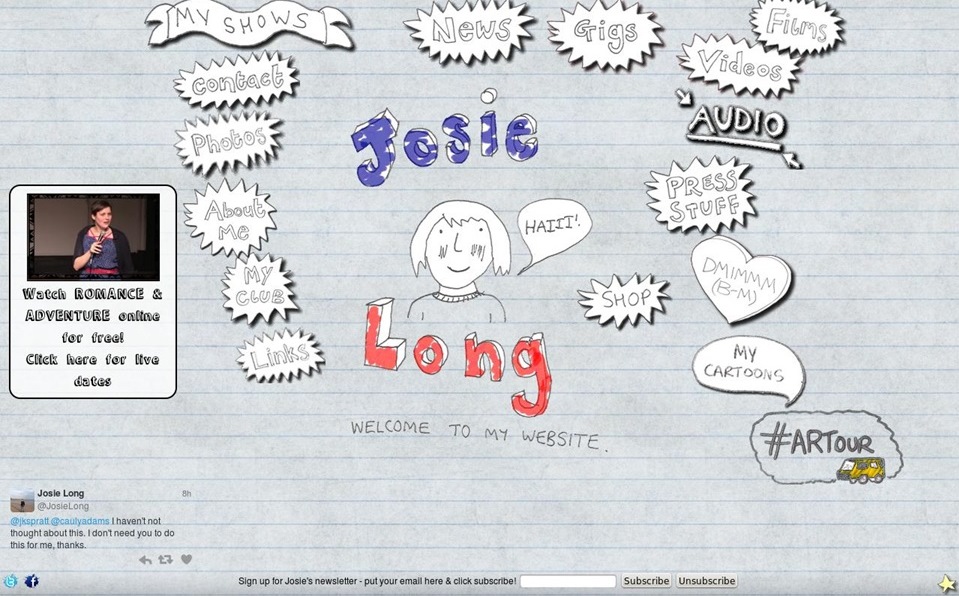 Josie Long’s website (http://www.josielong.com/). Josie Long deposited physical material with the BSUCA in January 2016, and her website has also now been archived within the UK Web Archive at the British Library.

Approach 2: providing an overview of stand-up comedy in the UK today

As we are trying to collect material related to stand-up comedy in the UK I think that it is really important to try to capture as much information as possible about current comedians and the current comedy scene, nationally and locally. So my second focus has been on nominating websites which provide an overview of stand-up comedy in the UK today. Rather than initially focussing on nominating the websites of individual comedians (which would be an enormous task!) I have instead been nominating websites which are dedicated to comedy in the UK, both at a national level, such as Chortle and Beyond the Joke, and those at a regional level such as Giggle Beats (for comedy in the north of England) and London is Funny. I’ve also nominated the comedy sections in national news outlets like the Guardian and The Huffington Post (UK), as well as in regional news outlets such as The Skinny (Scotland and the north west of England), The Manchester Evening News, and The York Press. These websites include news, interviews with comedians and others involved in comedy, as well as reviews and listings of upcoming shows. The idea was that capturing these sorts of websites would help to demonstrate which comedians were performing, where they were performing, and perhaps some of the themes discussed by comedians in their shows. These websites have been categorised into the sub-category ‘Stand-up news, listings and reviews’. 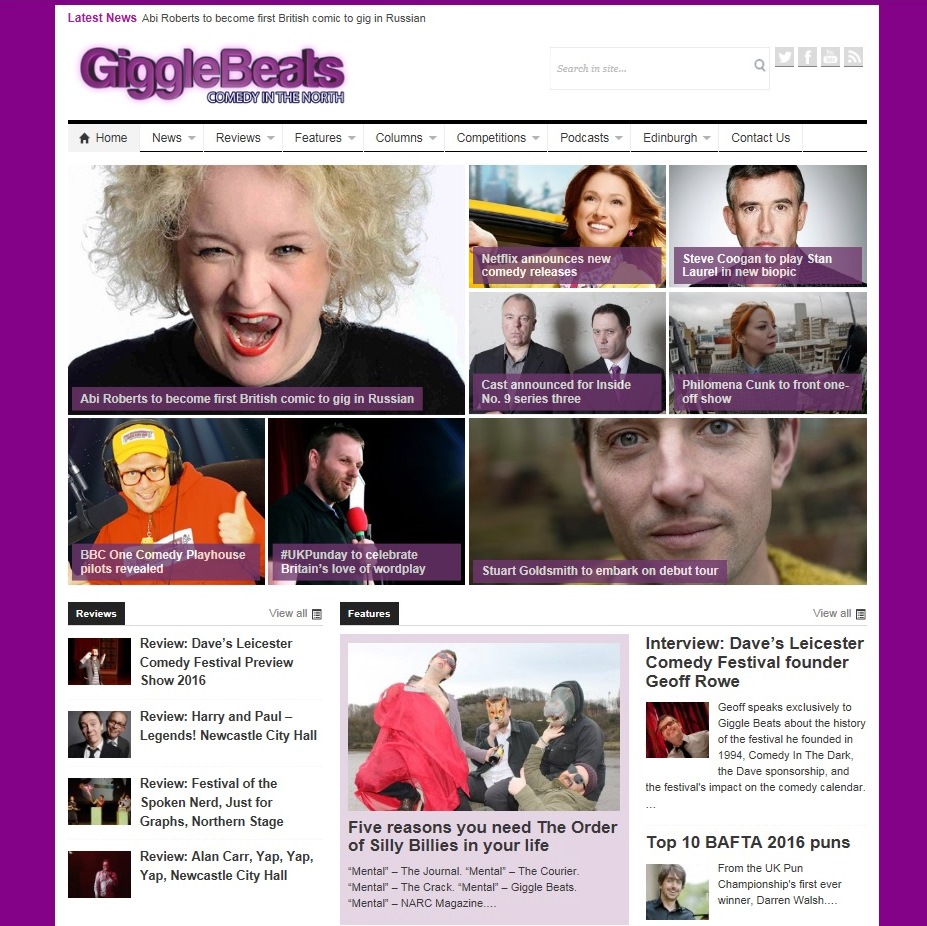 Giggle Beats (www.gigglegeats.co.uk), a website founded in June 2010 to promote comedy in the north of England.

I’ve also been focusing on the websites of comedy venues in order to document the variety of comedy clubs there are, to provide an overview of the comedians who are performing, as well as to document other issues like the cost of attending a comedy club night.  Many of the clubs whose websites have been nominated are quite longstanding venues, such as Downstairs at the Kings Head (founded in 1981), the Banana Cabaret Club in Balham (established 1983), and The Stand Comedy Club (established in Edinburgh in 1995). And of course I’ve also been focusing on comedy festivals around the UK. Much material relating to the Edinburgh Festival Fringe had already been included in the UK Web Archive but websites for Free Fringe events (which many see as important for the Edinburgh Festival Fringe*), such as the Free Festival and PBH’s Free Fringe, have now been nominated. I’ve also been nominating websites for comedy festivals around the UK, ranging from large established festivals such has the (Dave) Leicester Comedy Festival and the Machynlleth Comedy Festival, to smaller festivals such as the Croydon Comedy Festival and Argcomfest (Actually Rather Good Comedy Festival). The sub-category of ‘Venues and festivals’ is by far the largest sub-category so far! 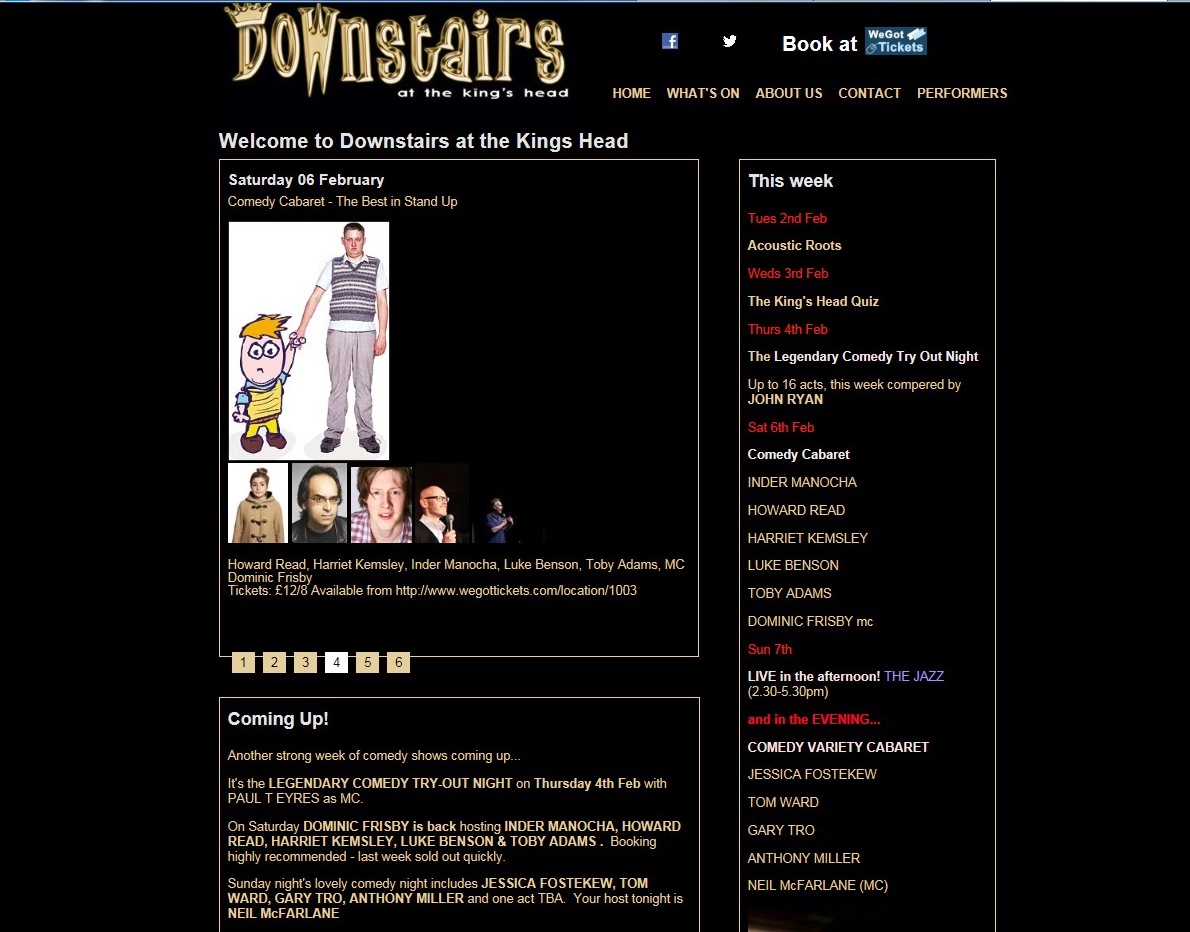 Website for Downstairs at the Kings Head (http://www.downstairsatthekingshead.com/), a comedy club in Crouch End, London, founded in 1981.

Other features of current stand-up comedy that have been captured include organisations such as the Comedy Support Act (a charity funded by benefit shows which aims to provide emergency funds and assistance to professional comedians who find themselves in financial hardship through serious illness or accident) and organisations and events which celebrate and promote women in comedy such as What The Frock!, Funny Women, Laughing Cows Comedy, and the Women in Comedy Festival.

There are so many more websites that I haven’t yet been able to nominate, particularly those of individual comedians or performers. However, the UK Web Archive is open to all (as long as the website is part of the UK web domain), so if there are websites relating to UK stand-up comedy that you want to be archived in the UK Web Archive please nominate them here http://www.webarchive.org.uk/ukwa/info/nominate.

* Luke Toulson, ‘Why free is the future of the fringe…and 7 more ways to improve the festival’, http://www.chortle.co.uk/correspondents/2013/08/04/18425/why_free_is_the_future_of_the_fringe; and Nick Awde, ‘Free shows are ringing the Edinburgh Fringe changes’, https://www.thestage.co.uk/opinion/2015/setting-theatre-free-edinburgh/