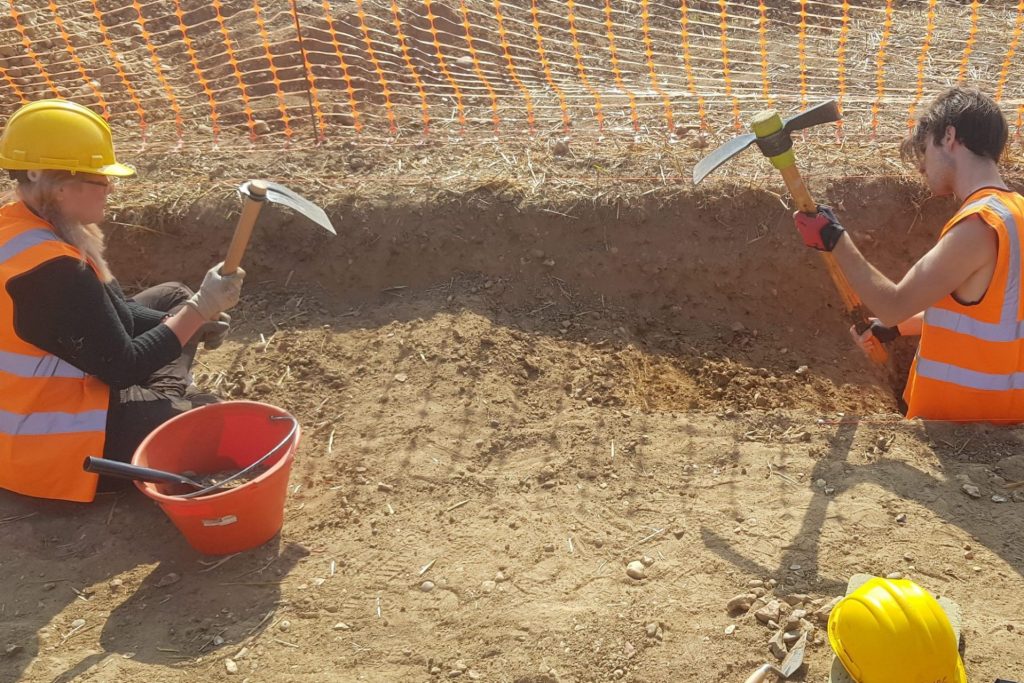 The Department of Classical and Archaeological Studies has concluded an excavation on the Canterbury campus at Blean Church Field, as part of the Blean & District Archaeological Survey. The dig took place over two weeks in September.

The aim of the project was to complete an inventory of archaeological sites around the Canterbury campus and to better understand its landscape setting, with a focus on local heritage.

The dig included staff and 30 students from the University, over two weeks in September. Despite the site being extremely challenging, consisting of gravel-filled clay with large flints, excavation proceeded well and was conducted in accordance with social distancing guidelines.

Discoveries included a scatter of tools left by hunters of the Mesolithic (9,000 to 4,300 BC), a series of Bronze Age burial mounds (marked by ring-ditches), and a massive medieval enclosure ditch, related to the adjacent Blean Manor House, which is mentioned in the Domesday Book. There is also evidence of tile production, an industry that served Canterbury from this site on ‘Tyler Hill Road’.

Magnetic survey work has revealed the extent of a now lost Iron Age to Medieval field system, and has identified a new site nearby, potentially a small Roman building. However, the site now stands out in the district for being a centre of sacrality, from its burial mounds to the later church, dedicated to saints Cosmus and Damian.

The dig also revealed that the barrows once had a white chalk crust, visible from miles around. The mounds survived until the medieval period, when the present settlement of Blean began. Those Germanic incomers were drawn to such mounds, seeing them as resting places of heroes.

Dr Luke Lavan, Lecturer in Archaeology and project director, said: ‘This has been an incredible opportunity for our students to get together in a physically-distanced setting outdoors, with a chance to experience the work and networking that digs consist of and are a big part of the field of archaeology. It exemplifies the best of hands-on learning, giving the students a tangible connection with the ancient past. Our aims have been to enrich our campus story and the University’s place in local history. Special thanks goes to site director Dr David Walsh and to alumnus Paul Dyer for making this dig possible, and to our devoted diggers who have added over 5,000 years to Blean’s history.’’

Dr Kelli Rudolph, Head of Classical and Archaeological Studies said: ‘At such a challenging time, this was an excellent opportunity for students to build the friendships and fundamental skills of intellectual enquiry that make the Classical and Archaeological Studies community thrive at Kent. We look forward to providing further opportunities for students to work with the community in discovering and making sense of our heritage.’