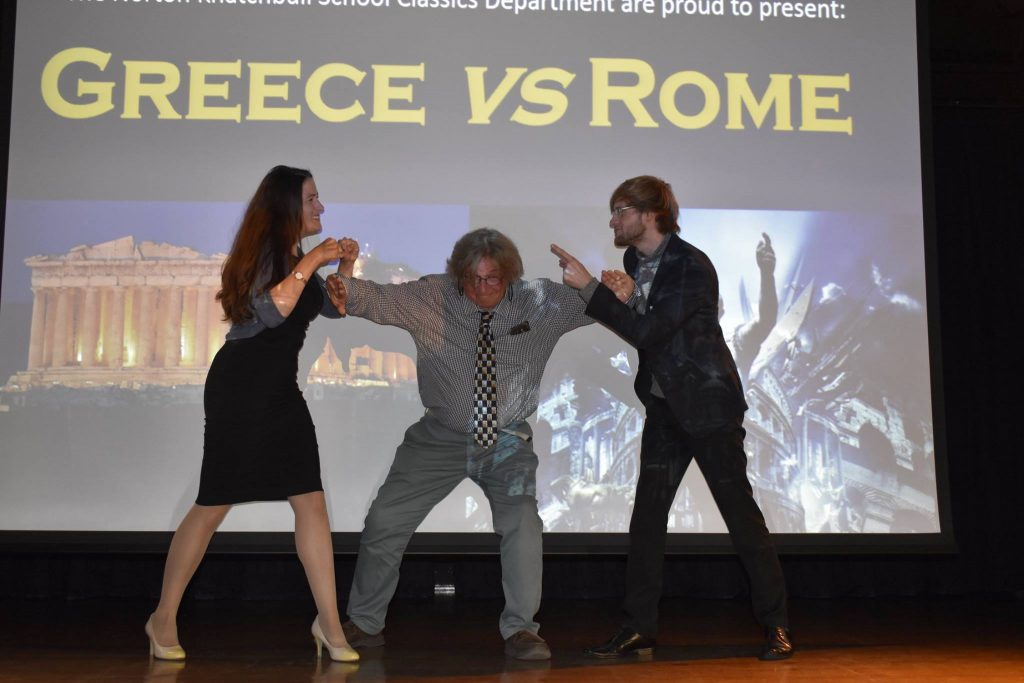 Dr Rosie Wyles and Dr Christopher Burden-Strevens, both lecturers in the Department of Classical and Archaeological studies, have been working with Norton Knatchbull School to encourage students to explore Classics.

Rosie Wyles saw Norton Knatchbull pupils’ production of a Greek tragedy and was so impressed with the standard of their work that she invited them to take part in the Advocating Classics in Education (ACE) event hosted by the University of Kent in 2017. The pupils and their teacher, Paul Found, shared their passion for Classics with the audience of teachers and other secondary school pupils.

As part of this event, the Department was delighted to welcome writer and broadcaster Nathalie Haynes, who judged a competition in which pupils were shown 3D printed copies of the Dea Nutrix statue from the Roman Museum in Canterbury and asked to come up with an amusing caption for the artefact. First prize went to Vicky Stone from Simon Langton Girls’ Grammar School for the witty one-liner, ‘The third triplet’s under my chair’!

As part of the Department’s ongoing efforts to promote the subject, a Classics Debate was arranged in September 2018, one year on from the ACE event. Rosie and Christopher hosted a ‘Greece Vs Rome’ debate to encourage students to sign up to study Classical Civilisation at A Level.

Rosie Wyles championed Ancient Greece as the greatest civilisation from antiquity and Christopher Burden-Strevens argued on behalf of the Romans. After Greece vs Rome battled it out in three rounds – art, war and legacy – during which each participant had 3 mins to make his/her case, Christopher won a well-deserved victory.

Rosie said: ‘It has been wonderful to be involved with Norton Knatchbull School and to meet students who, thanks to their inspiring teacher, have discovered a passion for studying the ancient world. May Classical Civilisation studies long continue! I’m already looking forward to seeing them stage another ancient Greek drama.’