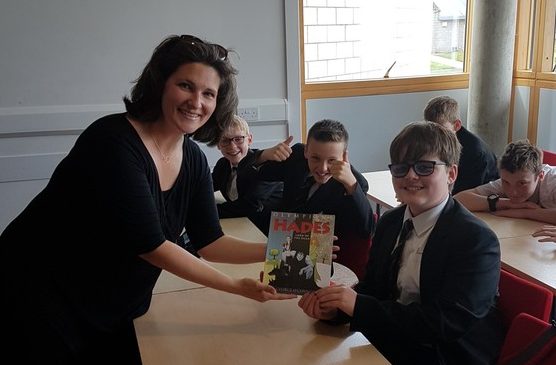 The Department of Classical and Archaeological Studies recently hosted their end of year prize competition for this year’s ‘Classic Tales’ project. Thirty pupils in Year Seven at Dover Grammar School for Boys were invited to attend an event at the University to celebrate their achievements.

The pupils were required to produce an artistic interpretation of Homer’s Odyssey, either individually or as part of a small group, with the thirty students who produced the most original projects invited along for an unforgettable day at the University’s Canterbury campus.

With interpretations ranging from pottery to poetry and re-imaginings of the tale set in locations as far-flung and far-fetched as space and cloning labs, Lecturer in Classics and Philosophy Dr Kelli Rudolph, and Dr Alexandra Martin-Carey, Humanities specialist from the University’s schools outreach team, were delighted by the range and quality of the submissions.

The project was delivered with the aim of giving pupils access to the history and traditions of story-telling, with the day at the University designed to allow pupils to experience what life with lecturers and being on a real campus would be like. The pupils who took part in the project said they enjoyed ‘the atmosphere around campus’, with another remarking that ‘before going on this trip, I didn’t really want to go to a university, but after my experience I now really want to go!’ The vast majority agreed, with just 42% of attendees saying they wanted to go to university before the trip, but that number soared to almost 75% after their glimpse of life on campus.

Kelli Rudolph said: “Classical Tales has had another amazingly successful year! The power and beauty of Homer’s Odyssey inspired thirty 11-12 year olds to new creative and intellectual heights. In addition to their creative responses to this 3000 year old tale, they easily sustained a near university-level analysis of key aspects of the text in a seminar style setting. This is a spectacular outcome for a programme designed to make the literature of antiquity accessible to all students regardless of their background or attainment level. The students’ outstanding work is evidence of the timeless nature of ancient literature, and its ability to spark imagination. After getting a taste of what Humanities has to offer on a university campus, it was no surprise that the number of students in the group wanting to go to University nearly doubled. This is what great literature has the power to do: inspire students to dream bigger, strive harder and let their imaginations run free.”