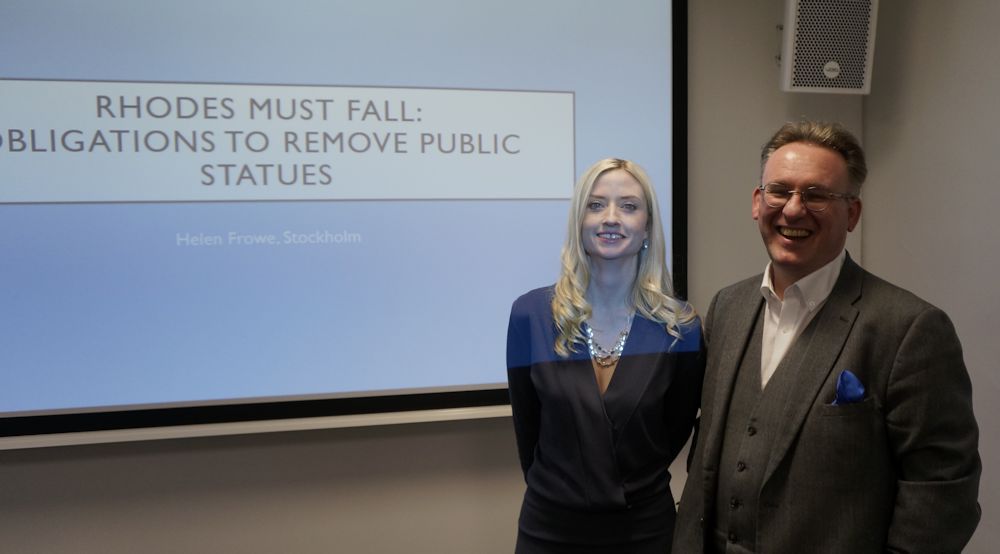 The School of European Culture and Languages was delighted to welcome Philosophy alumna Professor Helen Frowe on Wednesday 27 March for a talk entitled ‘Confederates, Rhodes, and Honour: Obligations to Remove Cultural Artefacts’.

Helen graduated from Kent in 2003 with a BA in Philosophy and, after completing her PhD, returned to the University as a Lecturer. She is now Professor of Practical Philosophy and Wallenberg Academy Research Fellow in the Department of Philosophy at Stockholm University, where she directs the Stockholm Centre for the Ethics of War and Peace, and describes herself as ‘working on a range of issues in moral and political philosophy, including moral coercion, the ethics of indirect foreign intervention, the destruction and protection of heritage in war, and complicity in online wrongdoing’.

Helen’s talk explored the circumstances in which a state authority ought to remove a statue of a historically significant figure from public display. Helen argued that states have duties to remove public statues of historical figures at least when that person engaged in serious rights violations, unless the statue is on display in a public museum or art gallery. This view is partly motivated by a conceptual claim about public statues of historical figures – namely, that such statues presumptively express positive evaluative attitudes towards that figure.

Helen went on to argue that it is because statues of historical figures typically express this positive evaluation of the subject that keeping the statue is incompatible with the duties to condemn and repudiate wrongdoing. As a SECL alumna, Helen describes her ‘many happy memories of being at Kent as both a student and a lecturer,’ and expressed her delight at seeing a philosophy department that is ‘thriving,’ and a university that is ‘continuing to grow.’

Dr Todd Mei, Head of the Department of Philosophy, said of the event: ‘Professor Frowe’s public talk was an excellent example of how philosophy, with its method of the analysis of concepts, can clarify and provide a compelling response to what is really at stake in public debates on controversial topics. Her discussion of the State’s responsibility to remove public statues with respect to the violation of rights brings to bear significant questions about cultural memory and duties to past, current, and future victims.’