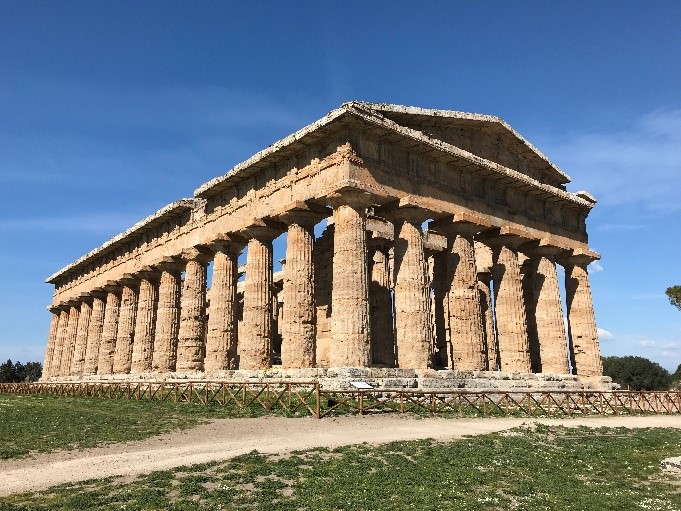 The week started with Pompeii, an exceptionally well-preserved settlement whose origins go back to the Greek colonisation of the southern Italian coast in the Archaic Era. Just under 200 years after its re-foundation as a Roman municipality, Pompeii famously came to lay under the ash and volcanic debris of the eruption of Vesuvius in 79 CE. Thanks to this, the site now boasts some of Roman Italy’s best-preserved mosaics and wall-frescoes. The Alexander Mosaic in the House of the Faun – one of Pompeii’s many impressive elite houses – aroused particular interest!

Composed of over one million individual hand-laid tiles, the Alexander Mosaic tells the story of the battle between Alexander the Great and Darius III of Persia. Opportunities were not lost to enjoy the Italian sun, however. A walk through the monumental Forum led Kent students to Pompeii’s most grandiose temple architecture, including some of its earliest cult sanctuaries. The Sancturary of Apollo hosted Pompeii’s oldest religious cult, although like much of the surrounding temple architecture it was entirely remodelled after the Roman re-foundation and the earthquake of 62 CE. After a busy day at Pompeii, students had to mark the event with a group photo!

Less well-known to Kent’s students, but equally important, was Paestum. Like Pompeii, Paestum’s origins lay in a Greek settlement  (Poseidonia) on the shores of southern Italy which was subsequently re-founded as a Roman colony in the Republic. The distinctly classical Temple of Hera offered Kent students a rare privilege on day two of the trip: the chance to enter and walk around the full circuit of a Doric temple constructed over two and a half thousand years ago, still impressively intact.

After students had made the most of the temples, it was time to enter the large archaeological museum of the excavations of Paestum. The museum boasts an astonishing collection of well-preserved artefacts, not only from the original Greek colony, but also of the Samnite and Lucanian inhabitants prior to the Roman conquest. Kent students were especially lucky to be admitted to the subterranean levels, normally closed to the public. An exquisite collection of Lucanian wall-paintings from the 4th and 3rd centuries BCE gave a rare glimpse into the art of the Italic tribes of pre-Roman Italy. This evidence added an important extra dimension to the students’ understanding of the cultural history of ancient Italy beyond only Roman and Greek art.