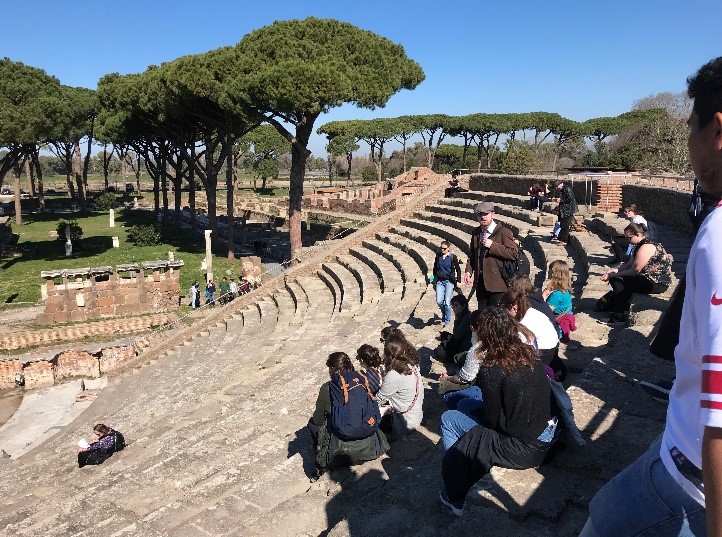 The third day of the trip brought an excursion to Ostia, Rome’s ancient port at the mouth of the Tiber. Much of what remains of this well-preserved Roman municipality can be dated to the building works of Hadrian and Antoninus in the 2nd century CE, but it is a mistake to conclude its history there. Having extensively charted the Late Antique archaeology of the site, Dr Lavan explained to Kent students in the theatre that it has a rich and fascinating later history.

Resting their feet in the theatre, our students learned that it is a mistake to speak of the ‘decline’ of Ostia in later antiquity. Its mercantile importance was indeed challenged by Portus, enlarged substantially by Trajan in the 2nd century CE to feed antiquity’s largest city. But an impressive array of Late Antique aristocratic houses demonstrate the continuing popularity of this area among Rome’s elite, even up to the fall of the Roman empire in the West.

Our students ended their rich and full week with the ancient heart of the Roman Empire itself: the Roman Forum. Here, Dr Lavan walked our undergraduates through a detailed archaeological tour of the site. Though familiar to many tourists, the Forum Romanum is notoriously difficult to unpack: it was continually modified and expanded throughout antiquity, from the 6th century BCE to the 6th century CE, and since then has often been subject to spoliation and repurposing. The ever-changing stratigraphy, or ground-levels, of the area add to the difficulty. With Dr Lavan’s guidance, Kent students were able to form a coherent picture of this especially complex site, getting to grips first-hand with the beating heart of the Rome they have often studied in the lecture theatre.

Meanwhile, Dr Burden-Strevens teamed up with MA students from Kent’s Paris School of Arts and Culture to talk them through the history of the Forum as a political space.  From the earliest myths surrounding the foundation of the Forum, to the tumultuous careers of the Gracchi at the rostrum, the burning of the Senate-house and the triumphal arches of the emperors Titus and Septimius Severus, Kent’s Paris students took a lightning tour of the history of Rome through its buildings.