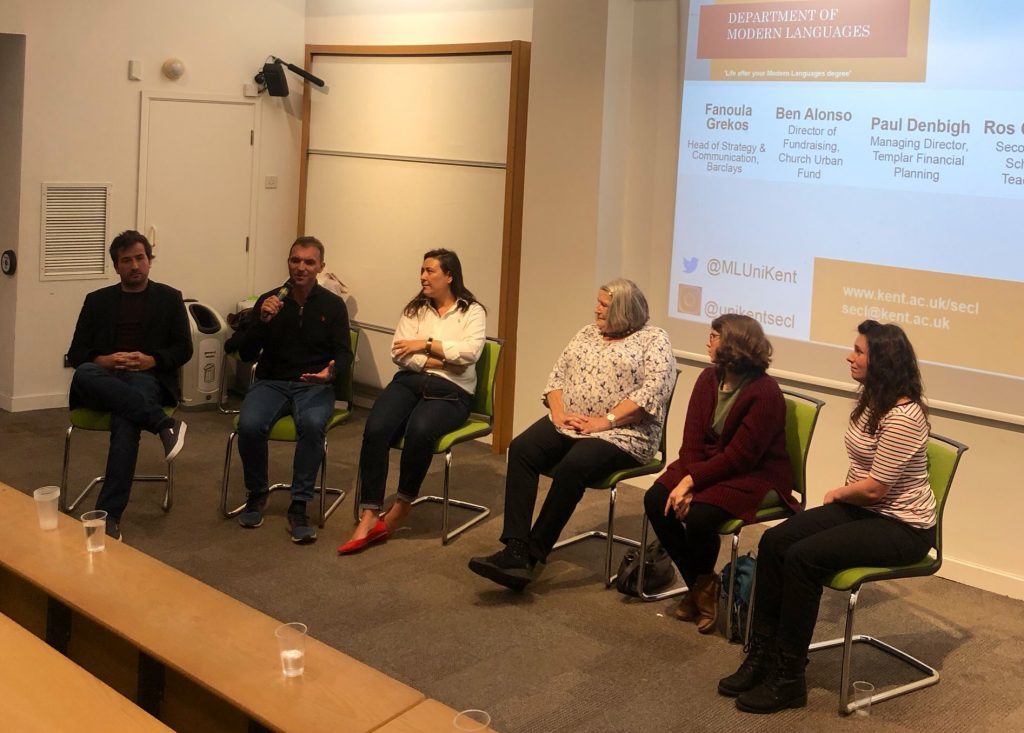 On Saturday 16 March, the Department of Modern Languages was delighted to welcome six former students to campus for “life after your Modern Languages degree” – an event designed to give students an opportunity to discover the wide range of career paths that alumni have taken.

Ben Alonso graduated in 2008 with a BA in Psychology with Studies in Europe 2008 and is now Director of Fundraising at Church Urban Fund, a charity focussing on community development.

Fanoula Grekos graduated in 2001 with a BA in French and Spanish and is now Head of Strategy and Comms at Barclays.

Paul Denbigh graduated in 1995 with a BA in European Studies (History) and is now Managing Director of Templar Financial Planning.

Ros Gregg graduated in 1968 with a BA in French (making her one of the University’s very first graduates!) and has taught at primary and secondary level.

Lucinda Smith graduated in 2016 with a BA in Hispanic Studies and is now a PR Assistant at Citigate Dewe Rogerson, a financial corporate communications company.

Julia Marquis graduated in 2010 with BA in Drama and Spanish and is now Project Support Officer at the Gaia Foundation, an environmental charity.

The event also featured two video interviews, with graduate Greg Pioli – who graduated from Kent in 2004 with a BA in French and is now Director of the Online Language Academy – and with Ruth Martin, who graduated from Warwick in 2001 with a degree in English and European Literature, and from Birkbeck, University of London in 2006 with a PhD in German, and is now a freelance translator.

The event was chaired by Tobias Heinrich, Lecturer in German, and Rebecca Ogden, Lecturer in Latin American Studies, with advice from the panel on how to tailor your application when applying for lots of different roles; how to make the most of your year abroad when applying for jobs; how to “sell yourself” as a languages graduate; and being aware of – and maintaining – your digital footprint. After the event, guests including students from all year groups as well as students from local schools and sixth form colleges, had the opportunity to speak to members of the panel and brush up on their networking skills.

Rebecca Ogden said of the event: “We wanted to host an event that gave a more personalised picture of where a Modern Language degree can lead you, beyond the more obvious routes of teaching and translation. The panel of Kent Modern Languages graduates brought fascinating, honest and rich advice based on career trajectories in their diverse fields. What became clear was that there are many skills that come from learning languages – resilience, adaptability, communication – that find direct application in unexpected careers such as project management. One panelist who works in finance strategy said that learning to analyse cultural texts meant she played close attention to nuance in meaning, and was able to ‘translate’ complex communication to different audiences. After the roundtable, students and panelists stayed to talk over coffee and practice networking.”

The full recording of this event has been uploaded to YouTube: