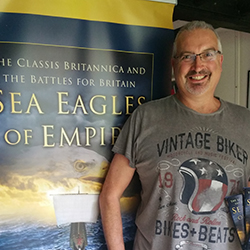 Simon Elliott, a doctoral student in the Department of Classical & Archaeological Studies and author of Sea Eagles of Empire, is to speak at the Norfolk Archaeological & Historical Research Group (NAHRG), summer conference on Roman East Anglia. The conference, organised in association with the Centre for East Anglia Studies takes place on Saturday 22 July 2017 at the University of East Anglia, Thomas Paine Lecture Theatre.

Simon’s talk will focus on his theories regarding the transition from offence to defence in the Roman control of the North Sea and the littoral zone around the eastern coast of occupied Britain in the mid 3rd century.  His presentation will be based on his book Sea Eagles of Empire: The Classis Britannica and the Battle for Britain, published by the History Press in August 2016, where he discusses the disappearance of the British regional fleet after AD 249.  He will set this in the context of the appearance of significant fortifications around this coastline during the 3rd century, later to become part of the Saxon shore fort network.

Further details of the conference and how to book are available at: www.nahrg.org.uk/events.php