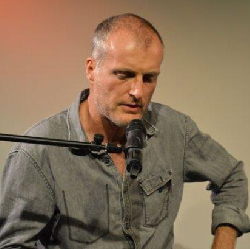 Dr Heide Kunzelmann, Lecturer in German in the Department of Modern Languages, has co-organised with the Austrian Cultural Forum a reading by Robert Seethaler, as part of her role as Director of the Ingeborg Bachmann Centre for Austrian Literature and Culture at the Institute of Modern Languages Research (School of Advanced Studies, University of London). The reading will take place on Tuesday 16 May 2017 at the Austrian Cultural Forum, London.

Robert Seethaler was born in Vienna in 1966. He is the author of five novels, including The Tobacconist (Picador, 2016) and the Internationally acclaimed A Whole life (Picador, 2015) which was shortlisted for the Man Booker International Prize in 2016. He also works as an actor in film, TV and theatre, most recently in Paolo Sorrentino’s film Youth (2015). Seethaler divides his time between Vienna and Berlin and will be the Ingeborg Bachmann Centre’s writer-in-residence in 2017.

The way the lives and deaths of Seethaler’s unassuming heroes, intertwined with the history of Austria in the 1920s, 1930s and post-War times, present us with a rich canvas of ordinary lives devoid of sentimentality, where fictional encounters with famous Austrians like Sigmund Freud are not all that strange.

Seethaler and UK actor Joseph Kloska (The Crown, Made in Dagenham) will read in German and English followed by a panel discussion moderated by Heide Kunzelmann with Robert Seethaler and his translator Charlotte Collins.

Tickets are available from: www.acflondon.org/booking/?event=robert-seethaler-reading