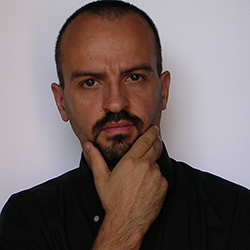 The Centre for Modern European Literature is to host Italian author and scholar Dr Alessandro Perissinotto (University of Turin) for a series of events next week.

Alessandro Perissinotto has published numerous novels, including historical and crime fiction. His first novel was L’anno che uccisero Rosetta [The Year that Killed Rosetta] (Sellerio, 1997). His novel Una piccola storia ignobile (Rizzoli, 2006), published in English as Blood Sisters by Hersilia Press. And his recent work Semina il vento [For They Have Sown the Wind] (Romanzo, 2013) explores issues of radicalism and prejudice in Europe, that will form part of a debate during his visit.

Three events will provide the focus of his visit:

Tuesday 13 December
From Love to Tragedy: The Wounds of Religious Fanaticism and Hatred
A seminar debate open to all, will discuss the themes raised by Semina il vento
Darwin Lecture Theatre 3, 4-5pm, registration required by emailing W.Fiorucci@kent.ac.uk.

Wednesday 14 December
Intersections between Literature and Psychotherapy
A discussion with Dr Francesco Capello, Lecturer in Italian, on the practises, processes and bodies of knowledge between the two disciplines.
Cornwallis North West, Seminar Room 6, 5-7pm.

Thursday 15 December
Asylum in Twentieth-Century Italy
A talk with Dr Alvise Sforza Tarabochia, Lecturer in Italian, about asylums, and where Dr Perissinotto will read passages from his new book (to be released in march 2017).
Grimond, Seminar Room 3 [note the changes to the schedule], 5-7pm, followed by a wine reception.

All the events have been co-sponsored by the Centre for Modern European Literature and the University of Turn, with the organisation of Dr Wissia Fiorucci, Language Coordinator in Italian from the Department of Modern Languages at Kent.