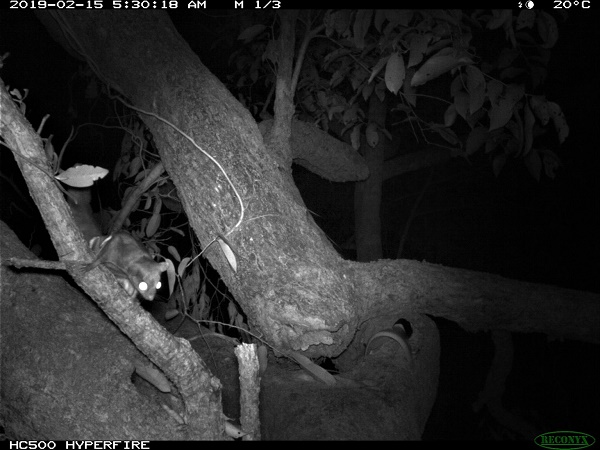 Researchers including PhD doctoral researcher Jessica Haysom, have recorded the first ever photograph of a rare flying rodent and evidence of new behaviours of tree-dwelling mammals in a camera-trapping survey in Sabah forests.

The team collected more than 8,000 photographs, cataloging 57 species in total, 30 of which were detected exclusively on ground cameras and 18 exclusively in the canopy. Jessica and her team took cameras up into the trees, completing the first in-depth and systematic camera-trapping survey of an arboreal mammal community in Southeast Asia.

The smoky flying squirrel (Pteromyscus pulverulentus) is rare even in primary forest, listed as endangered on the International Union for Conservation of Nature’s Red List and the only species in its genus.

Jessica was intrigued by the vast number of animals that live high in the Bornean forest canopy, about which next to nothing is known. “For a long time, we’ve only studied what’s on the ground because that’s really all that we’ve had access to,” Jessica said “But the canopy is just as important and it would be foolish to ignore it because there’s so much that’s going on up there.”

Their results demonstrate that the high terrestrial mammal diversity seen in logged forest does not appear to be due to animals descending to ground level and that surveying in the forest canopy is “crucial to our understanding of rainforest mammal communities”.

Read more about their discoveries here.