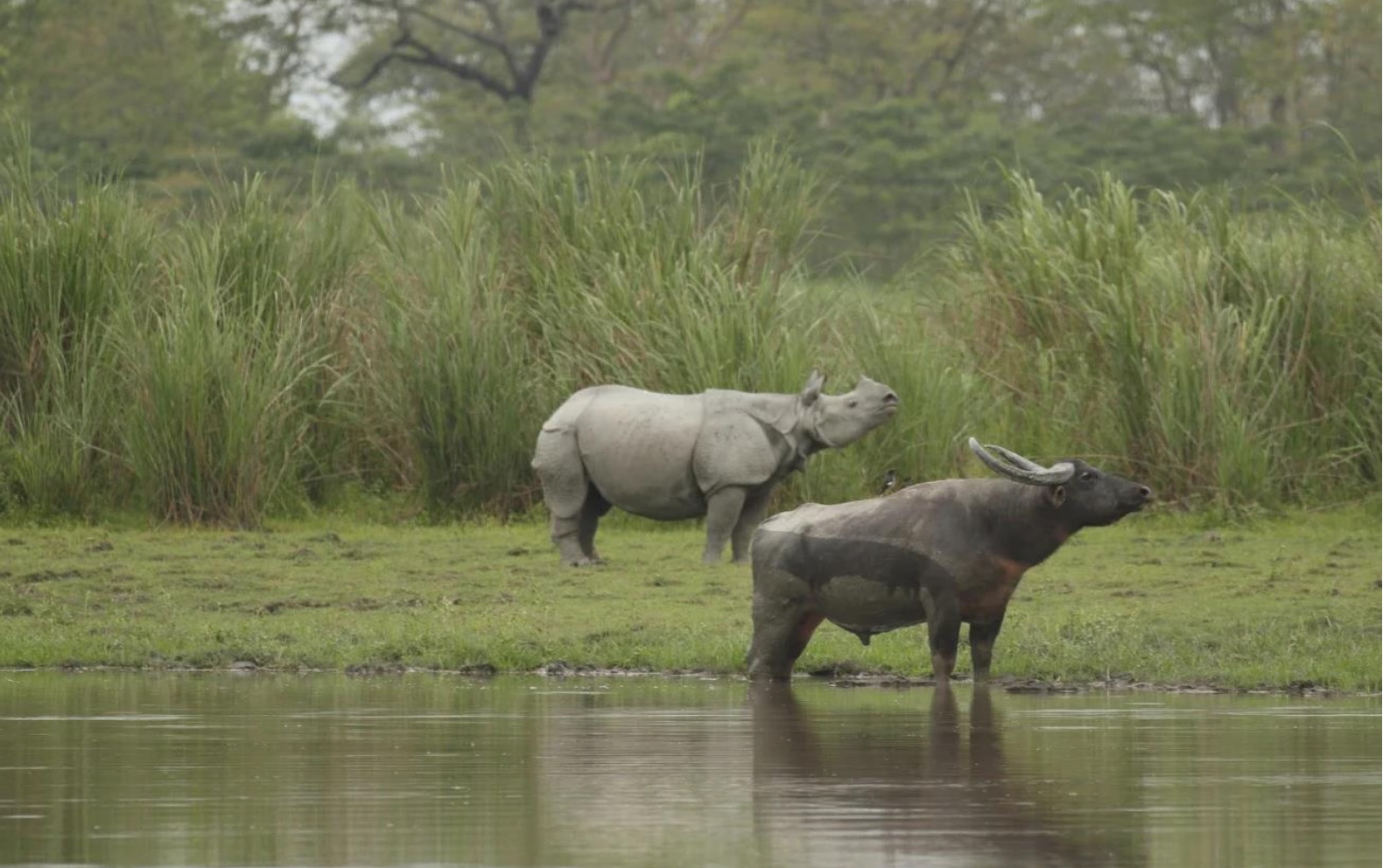 ‘Feasibility of reintroducing grassland megaherbivores, the greater one-horned rhinoceros, and swamp buffalo within their historic global range’ is now available on open access in the renowned journal Scientific Reports.

MSc graduate Harshini Jhala has published research from her MSc which was completed in the School of Anthropology and Conservation. Her study explored reintroduction sites for the endangered Indian greater one-horned rhinoceros (Rhinoceros unicornis) and the swamp buffalo (Bubalus arnee). The study, entitled ‘Feasibility of reintroducing grassland megaherbivores, the greater one-horned rhinoceros, and swamp buffalo within their historic global range’ is now available through open access in the renowned journal Scientific Reports.

Harshini’s research involved an examination of existing habitats in protected areas across the remaining terai grasslands of northern India, Nepal and Bhutan, across lowland areas south of the foothills of the Himalayas. Harshini conducted field visits working with colleagues at the Wildlife Institute of India, Qamar Qureshi and Professor Yadvendradev Jhala in a project supervised by Dr Simon Black at the Durrell Institute for Conservation and Ecology (DICE) who also co-authored the paper. An important aspect of the research was evaluating the management capacity and risks associated with reintroduction of these animals even in locations which initially appear to ecologically provide suitable habitats.

Harshini travelled through several states to explore the landscapes on the ground and gather information from professionals involved in national parks and wildlife reserves management. A key element in the study involved the assessment of local human threats since unfortunately both rhinos and buffalo are vulnerable to poaching. Using information on both species’ biology and ecology, Harshini conducted a Population Habitat Viability Analysis (PHVA) to model the likely survival of reintroduced populations.  This identified that reintroduced populations of more than 50 rhinos have a good potential for long term survival, and populations of more than 100 buffalo have the same potential for establishment in the wild.

The cost and infrastructure required to instigate and protect wild populations of these animals was also included in the study. Harshini’s evaluation of habitats included significant analysis and modelling of Geographic Information System (GIS) maps of existing landscapes and modelling locations against both species’  biological preferences (such as forest cover, rainfall, temperature, and landscape topography).  The study importantly identified that the existing capability and management regimes at several specific national parks in India, some not previously considered, would suit reintroduction of rhino, and other connected habitats crossing from India into Nepal offer significant potential for buffalo.

The tall grassland landscapes of northern India support important biodiversity including grassland-specialist mammal and bird species such as the pygmy hog, hispid hare, swamp deer, hog deer, and Bengal florican, which all feature on the IUCN Red List of endangered species. Large herbivores like rhinos and buffalo play a critical role in these ecosystems, since they act as ‘ecosystem engineers’, renewing and managing the grassland to maintain ecosystem effectiveness including the mix of vegetation present, the soil structure, water catchment and natural nutrient cycles.

Many areas of surviving tall grasslands in south Asia no longer have these large ‘megaherbivore’ animals present and both species are now rare in the wild (as few as 3500 greater one-horned rhino and around 3000 swamp buffalo). Both species are now restricted to just a handful of protected locations. One method which would help rhino and buffalo populations recover, as well as enabling these large animals to provide their habitat-engineering role, involves reintroduction, where animals are brought back into locations which they have previously been eradicated. An important aspect of this study was evaluation of each reintroduction site needs in terms of feasibility, including consideration of social and management issues as well as the biological and natural habitat adequacy of the location.

Harshini’s study identified several suitable locations, but just as importantly, also identified the unsuitability of other sites which until now had been considered as options for rhino reintroduction. The latter sites were identified as not feasible in terms of management capacity and experience, and reduced ability to address or eliminate potential local threats to rhinos or buffalo. The sites suggested by Harshini and her colleagues are important as they offer the option of developing new sub-populations of both species and therefore the possibility to improve the conservation of these magnificent animals in the long term. The greater one-horned rhino is an iconic species in the region, but this study has also offered new insights into the requirements of the endangered swamp buffalo which remains a poorly understood, but nevertheless important inhabitant of the terai grasslands if south Asia.

The research findings provide the first evidence for prioritising new reintroduction sites for greater one-horned rhino which incorporates management capacity and mitigation of threat risks, and will inform current decision making and policy concerning rhino conservation in the region.

The MSc in Conservation at the School of Anthropology and Conservation offers a range of taught pathways (both full-time and part-time) for academic and professional development and also enables students to explore research and practice as part of a final research project.

All our Postgraduate programme pages can be found here.