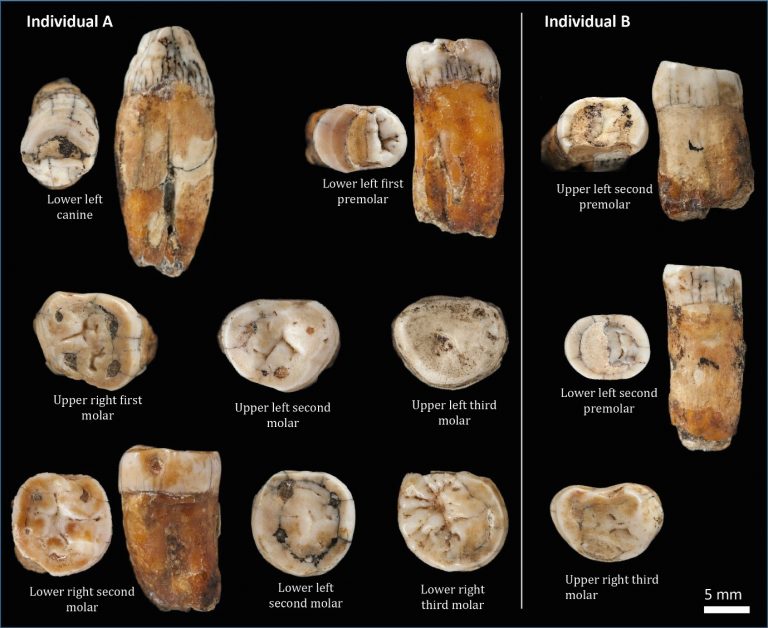 Kent’s Professor Matthew Skinner (School of Anthropology and Conversation), alongside experts from the Natural History Museum and UCL Institute of Archaeology, among others, examined thirteen Neanderthal teeth unearthed at the site. These teeth were previously recorded as belonging to a single Neanderthal individual. However, the new study found that the teeth are from at least two adult individuals who share the same distinctive features, suggesting traits prevalent in their population.

The specimens were found in 1910 and 1911 during excavations run by the Société Jersiaise and were discovered preserved on a small granite ledge within the cave. The researchers were surprised to find that these features, which elsewhere are considered to be typical of either Neanderthal or modern humans, are found in combination in this population. While all the teeth have Neanderthal characteristics, several of the teeth lack features normally found in these ancient humans, and certain aspects of their shape are typical of modern humans.

Excavations continued until 1920 and recovered over 20,000 stone tools assigned to the Middle Palaeolithic, a technology associated with the Neanderthals in Europe. Recent dating work funded by the Natural Environment Research Council (NERC) on nearby cave deposits suggested a probable age of less than 48,000 years for the teeth. This suggests they could have represented some of the youngest Neanderthal remains known (the Neanderthals are believed to have disappeared about 40,000 years ago).

Professor Chris Stringer of the Natural History Museum said: ‘Given that modern humans overlapped with Neanderthals in some parts of Europe after 45,000 years ago, the unusual features of these La Cotte individuals suggest that they could have had a dual Neanderthal-modern human ancestry. This idea of a hybrid population could be tested by the recovery of ancient DNA from the teeth, something that is now under investigation.’

Renewed excavations at the site, funded by Jersey Heritage, began in 2019. Dr Matt Pope, who is leading the excavations for UCL’s Institute of Archaeology, said: ‘This work offers us a glimpse of a new and intriguing population of Neanderthal people and opens the door to a new phase of discovery at the site. We will now work with Jersey Heritage to recover new finds and fossils from La Cotte de St Brelade, undertake a new programme analysis with our scientific colleagues, and put in place engineering to protect this very vulnerable site for the future. It will be a mammoth project and one to watch for those fascinated by our closest evolutionary relatives.’

Jersey Heritage have made the the microtomographic scans (3D x-rays) of all the La Cotte de St. Brelade fossil hominin specimens are publicly available on The Human Fossil Record, Dr Matt Skinner’s ERC funded repository, an online archive of digital media and information about the fossil record of humans. This makes them accessible for study anywhere! Professor Skinner said: ‘Through our collaboration with Jersey Heritage anyone can examine these fossils virtually, but also download surface models and 3D print them if they want to have their own high-resolution copies for teaching or just to put them on their mantlepiece. They are the next best thing to the fossils themselves.’

The teeth are now on permanent display at Jersey Museum & Art Gallery.

Their paper ‘The morphology of the Late Pleistocene hominin remains from the site of La Cotte de St Brelade, Jersey (Channel Islands)’ is published by the Journal of Human Evolution. DOI: 10.1016/j.jhevol.2020.102939