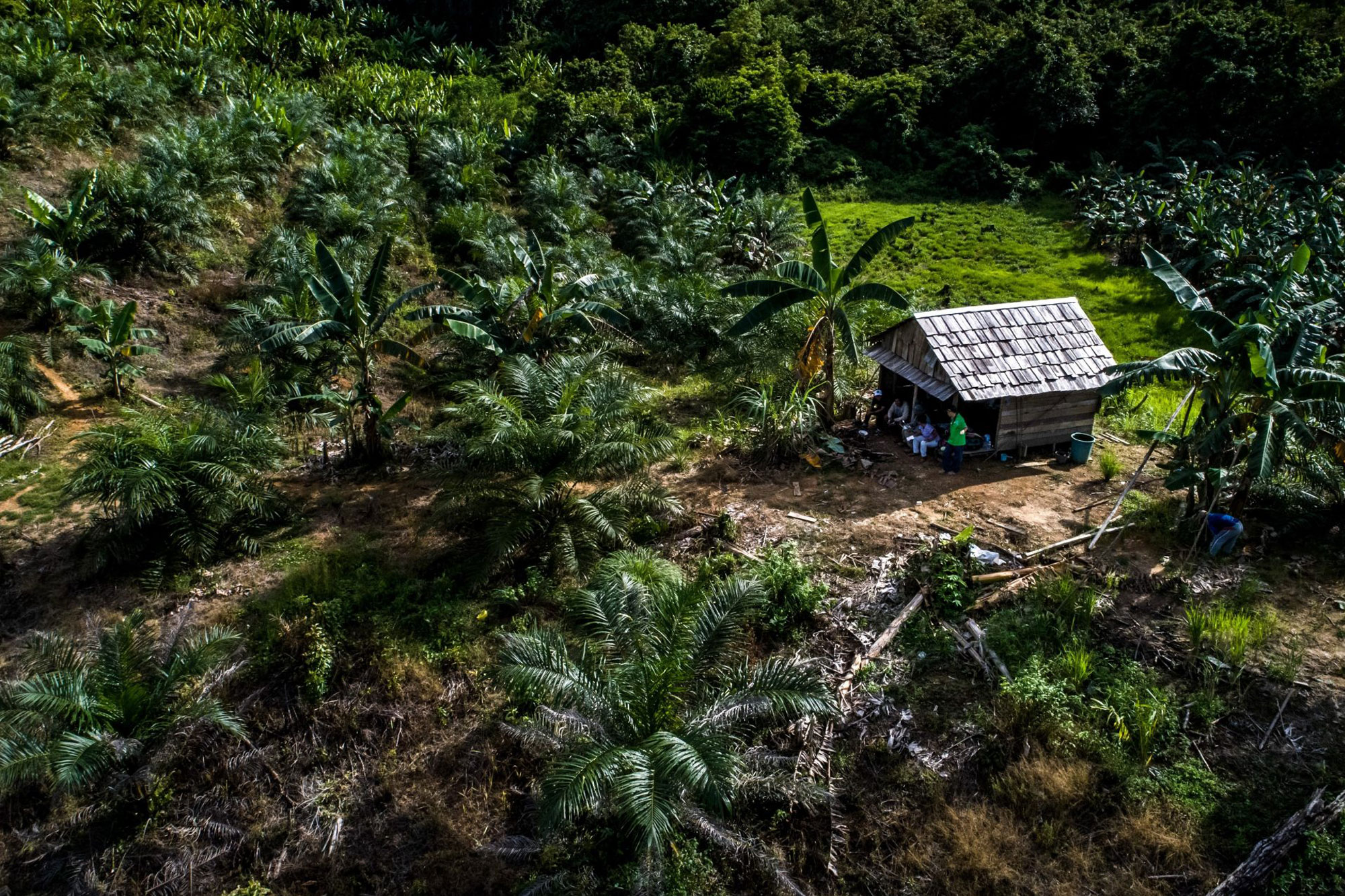 "A hut in the middle of oil palm plantations in Buluq Sen village" by Nanang Sujana/CIFOR.

Research led by the Durrell Institute of Conservation and Ecology (DICE) has found that Indonesian communities living near oil palm plantations are impacted in different ways, both positive and negative, during plantation development and certification.

Based on a counterfactual analysis of government poverty data from villages across Indonesia, the study, published in Nature Sustainability, explored the socio-economic and socio-ecological impacts of oil palm cultivation, and subsequent certification, on rural communities. Plantations were certified sustainable via the Roundtable on Sustainable Palm Oil (RSPO), which requires its members adhere to social and environmental principles and criteria that aim to ensure the production of palm oil improves outcomes for neighbouring communities and the environment.

The study, led by Dr Truly Santika (now University of Greenwich), Dr Matthew Struebig (DICE, University of Kent) and Professor Erik Meijaard (DICE), demonstrates that the timing of certification matters. The assessment tracked poverty changes in more than 36,000 villages over 18 years, providing the most detailed assessment to date of the impacts of oil palm and certification on people.

Indonesia is the world’s largest palm-oil producer, but the expansion of the sector has not been uniform across the country. Sumatra was developed first and is now dominated by mature oil palm. Before oil palm, rubber plantations were widespread so villages had adapted relatively well to the plantation sector. The researchers found this led to socio-economic impacts from oil palm certification being positive in Sumatra.

Kalimantan, on the other hand, experienced a more recent oil palm boom, which resulted in a very rapid change in land cover and deterioration of social-ecological conditions in this part of Borneo. In contrast with Sumatra, communities in Kalimantan with livelihoods that were much more dependent on forests saw fewer poverty improvements from oil palm, which continued when certification came in.

Compared with non-certified villages, overall measures of wellbeing declined by 11% on average across the country in communities that relied on subsistence-based livelihoods before certification. This decline was driven mainly by the fall in socio-ecological indicators: for example, via a significant increase in the prevalence of conflicts, low-wage agricultural labourers and water and air pollution.

In the early stages of oil palm development, the hoped-for social benefits from RSPO certification did not materialise in much of Indonesia. However, these benefits tended to show more in later stages of development when the enhanced environmental and social management associated with certified plantations have had more time to improve the lives of people.

Dr Struebig said, “Our research provides companies, the RSPO and other certification schemes useful insights into how the oil palm industry can contribute to people’s living standards. We now know that the potential benefits of oil palm production can take time to be fully experienced in Indonesia, so it will be interesting to see how further improvements to certification standards will be experienced by people in years to come.”

Dr Santika commented, “Consumers want to make informed decisions when purchasing products with palm oil, and the more research-led information that can be shared with them, the better.”