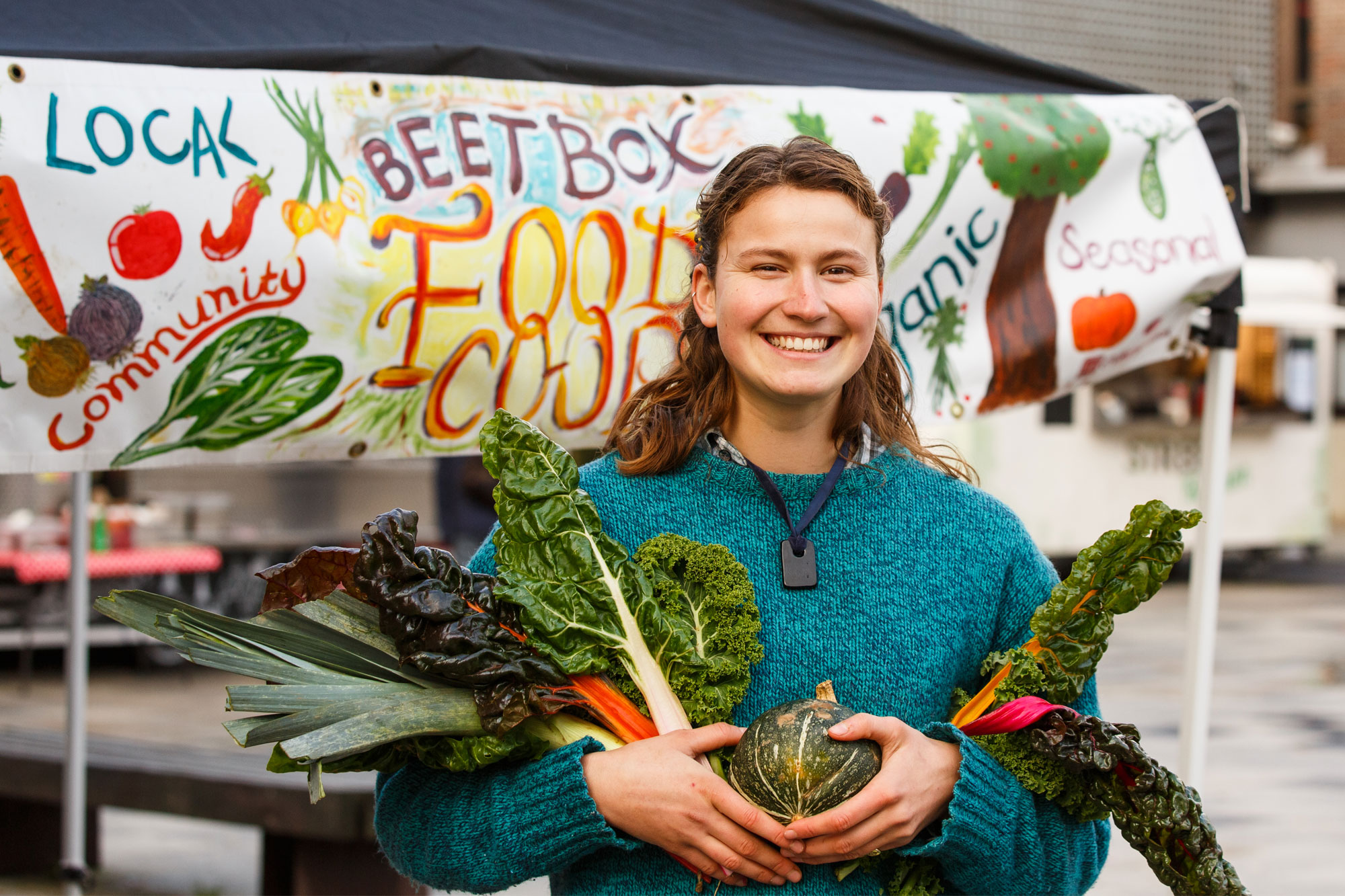 Olivia Haywood-Smith is the facilitator and co-founder of the Beetbox cooperative on the Canterbury campus. She is in the final year of her Human Ecology programme.

What is your role within Beetbox?

Being facilitator involves advertising, social media, organising pot-luck evenings and other events and allocating roles to different people. We’re a cooperative, so it is run by everyone.

We got funding from the Student Eats sustainable enterprise programme two years ago, in my first year. I got involved after students in the year above, who have now left the University, won funding. I was then part of the core team, and became joint facilitator with Emilia Brumpton last year. When that team graduated, I took over as facilitator. It’s been great, working with people in different Schools and from different years.

We work with two organic farms, Ripple Farm in Canterbury and The Wonky Parsnip in Chartham. The organic veg tastes so much better than supermarket vegetables.

Every Monday and Thursday, you can order vegetables from us for collection the next Thursday.

The farms deliver the vegetables to us on campus. This year, there’s been an increase in awareness about environmental issues. We’re getting 25 to 30 orders for organic vegetable bags a week, and last year it was 10 to 15.

People can bring their own bags to collect the vegetables or pay a deposit for one of Beetbox’s bags. We make 60p–£1 per bag, which goes into paying for things like the pot luck events and equipment.

Volunteers do different roles – they might help set up the stall or pack it down, pack the vegetables, or help with the orders. Anyone can get involved: students, staff and the general public. You don’t have to be a student in order to engage. The whole point is to integrate it with the community. I think that university can be a bit isolating sometimes, so it’s nice to be able to bring everyone together.

We have a volunteer putting recipes on Facebook. That’s really important because people don’t always know how to cook seasonal veg.

How important was it for Beetbox to be a cooperative?

It is important because it’s something you don’t see very much in our culture, in our society. Lots of things are based on a hierarchical model. It’s something I want to integrate into my life in the future as well.

It’s really important for me to be able to practise this within a safe space. It’s a really amazing thing that people can do and everyone’s contributing on equal levels. When everyone is able to input their ideas, it just makes things so much more exciting and productive.

You can see it with the people who come and buy the veg as well, they’ll offer to help. People come in with new ideas, which keeps things fresh and creative.

What else do you do around Beetbox?

We have pot-luck evenings in two cafés in Canterbury, and they have been an absolute success. Everyone makes and brings a dish of vegan food to share, and they bring their own plate and cutlery. There are a few judges and the winner of the best dish wins a free veg bag. Something that was a real vision with Beetbox was getting students to socialise around food rather than alcohol.

Cooking for yourself can be an isolating thing. People might see going out to a restaurant as more social, but home cooking can be social as well. Sometimes people cook a massive dish for themselves and have the same meal all week. With our pot lucks, you can cook a dish and come and share it, and try others.

The evenings are open to the public and we get all ages coming. It’s a safe space for an open mic as well. You end up getting people you never would have thought doing a poem or singing. The community is very welcoming and accepting.

Beetbox fundamentally is about the cooperative and veg box, but it can also be a platform for other things, such as film screenings.

I also want to get the volunteers to visit the farms because this is what Beetbox is all about. Reconnecting people with the soil and the land, knowing the patch of ground where the food comes from rather than vegetables being something that arrive wrapped in plastic from halfway around the world.

Lately, people are getting really interested in food sovereignty, wanting to know where their food comes from and how it’s grown.

What inspired you to get involved with Beetbox?

I just realised that there’s a sickness in the way our society is functioning. There is something that’s not right, that’s harming certain groups of people. It’s evident when you look at our system. I’ve discovered there are other pathways that can be formed. You can be part of our system, but in your own way. There are still so many things that are frustrating about the way our system works, but there are ways you can alleviate that. Beetbox is one of them.

How has your involvement with Beetbox developed you?

I know how to organise people and coordinate within a non-profit business, which is something I want to do when I leave university.

Beetbox is my social life at present and that’s the same for a lot of the people involved. We already have the Extinction Rebellion protests going on, but the biggest protest you can do is taking action.

Lots of us are really frustrated and hurting about the ecological breakdown. The Beetbox community helps to channel that frustration, and the people involved feel that they are doing some good. We’re providing people with access to fresh vegetables without chemical fertilisers and pesticides harming the soil, so it’s direct action.

University can be a bit of a bubble and so being able to integrate with people of all ages, including the public, is great. Being part of a community who care about food and the environment, socialising together, is really powerful.

If everyone who was protesting stopped and started providing platforms for people to access organic veg, alternative energy or different ways of living, a lot of action could happen.

How has getting involved with Beetbox helped you with your degree programme?

It’s helped me understand the world better and how society functions, in a simple way. Facilitating Beetbox has given me a wider perspective on life.

How do you manage to juggle Beetbox with your studies?

Because I have a love of farming and organic food, it’s what I’m most interested in. The community around it is so willing to help, and are passionate about what they provide, that they really want it to carry on. Beetbox feels like a break from my studies and I enjoy it.

What has been the highlight of your degree programme?

My lecturers: they’re amazing. They’re good teachers and really care both about what they teach and student wellbeing. I adore my course and feel fully engaged in every lecture.

The School of Anthropology and Conservation is a really close community: it stands out from the other Schools as having a reliable network of students and staff. After I visited Kent and the School, I got a personal email from one of my lecturers saying why they wanted me at the school. I did not get that from any other university.