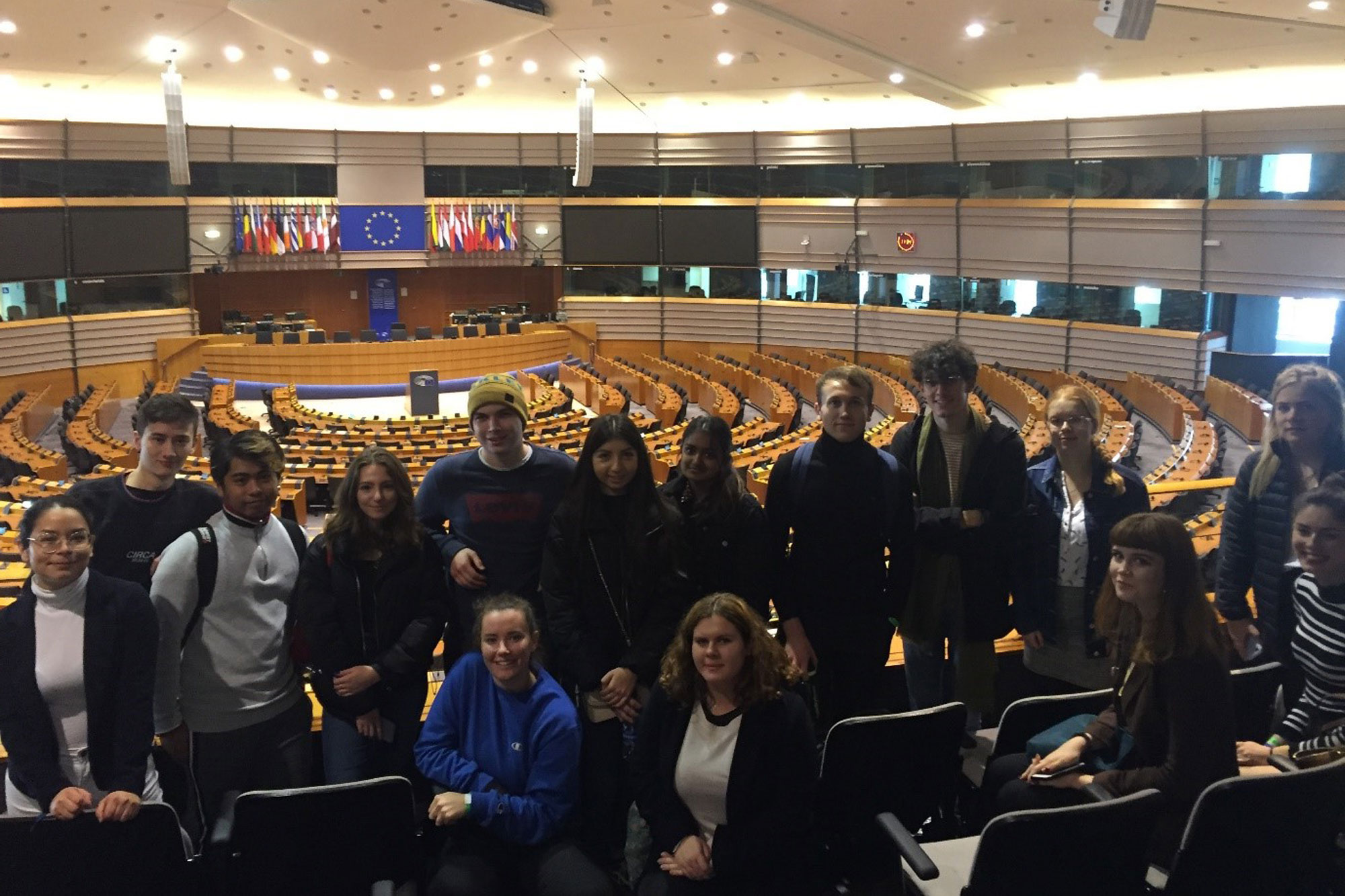 Our fieldtrip to Brussels as part of the BSc in Human Geography began as most fieldtrips do: early. We boarded the Eurostar with tired eyes and chattered excitedly about where we would visit, what the city would be like and, of course, Belgian waffles.

Upon arrival, we walked through the towering streets, revelling at the contrast between the colossal cityscape of endless glass and steel against the University of Kent’s quaint and cobbled hometown of medieval Canterbury. We stopped briefly in an idyllic park located close to the European Committee of the Regions (CoR) and European Parliament, to absorb the refreshing wildlife and lush, green expanse that carried passers-by far from the modernist architecture of the commercial districts that surrounded it. It was clear that we were in a critical and prominent location within Brussels.

Once we had entered the European Committee of the Regions, we were fortunate to receive a talk from an influential member of staff, Mr. Andrej Lavtar, Administrator for the Renew Europe group in the CoR, about the work that took place within the establishment. He explained the basics of how the system functions: for example, he told us that there are 350 members of the CoR and that its primary objective is to offer advice in reference to new legislation, and to ensure that this advice is implemented.

In the afternoon, we observed the 25th Commission for Territorial Cohesion Policy and EU Budget (COTER) meeting, as policies were passed or dismissed, witnessing the communication between nations regarding vital implementations, such as the Cohesion Policy, and watched a debate on whether or not to adopt the Future of Metropolitan Regions post-2020, which had objectives such as reducing economic, social and territorial disparities.

The decisions made on this day had the potential to impact thousands of lives, and to have the opportunity to witness them being made put the purpose of human geography into perspective. It is not just pen on paper, statistics and fieldwork (although these are very large and important aspects of it), but the discipline is relevant to everything that surrounds us as a society and has the transformative ability to change lives for the better.

Much to the joy of our stomachs, we then had an afternoon of free time to explore central Brussels. We visited the Grand Place Central Square and observed its opulent guildhalls and layers of rich civic history. We were instantaneously drawn into the enticing, calorific captivity of the famed chocolate shops, followed by an audaciously indulgent (and delicious) waffle. The evening concluded at the hostel with a geographical quiz and, once the chocolates had been delegated to the winning team, we relaxed in the lounge before finally making our way up to bed.

After a hearty breakfast at the hostel, our second day’s journey had begun. We visited the European Parliament, where we had a talk from a representative from the EU Parliament Information Office, who explained the purpose of the Parliament, when it was founded and a brief description of the expectations of working there (such as the ability to speak French, Dutch and English). We watched a video regarding the efforts being made by the EU to tackle the climate crisis, which demonstrated the effective capacity it holds to mitigate an international emergency.

Following this, we were taken on a tour of the Parliament building, which enabled us to enter the extraordinary European Parliament meeting room where fundamental international decisions are deliberated upon. From there, we headed to the University of Kent’s Brussels School of International Studies (BASIS), where we received a lecture by the academic head Dr Amanda Klekowski von Koppenfels entitled How English is resolving the Flemish/French Divide in Brussels.

To end our fieldtrip in this fasion was the perfect demonstration of the power the EU holds and how it utilises this across different geographical scales to alleviate economic, social and environmental challenges across its member states, as well as the EU’s influence on linguistic divides in the city of Brussels. With our brains fizzing and stomachs rumbling once more, we readily boarded the Eurostar train home – via a waffle shop.