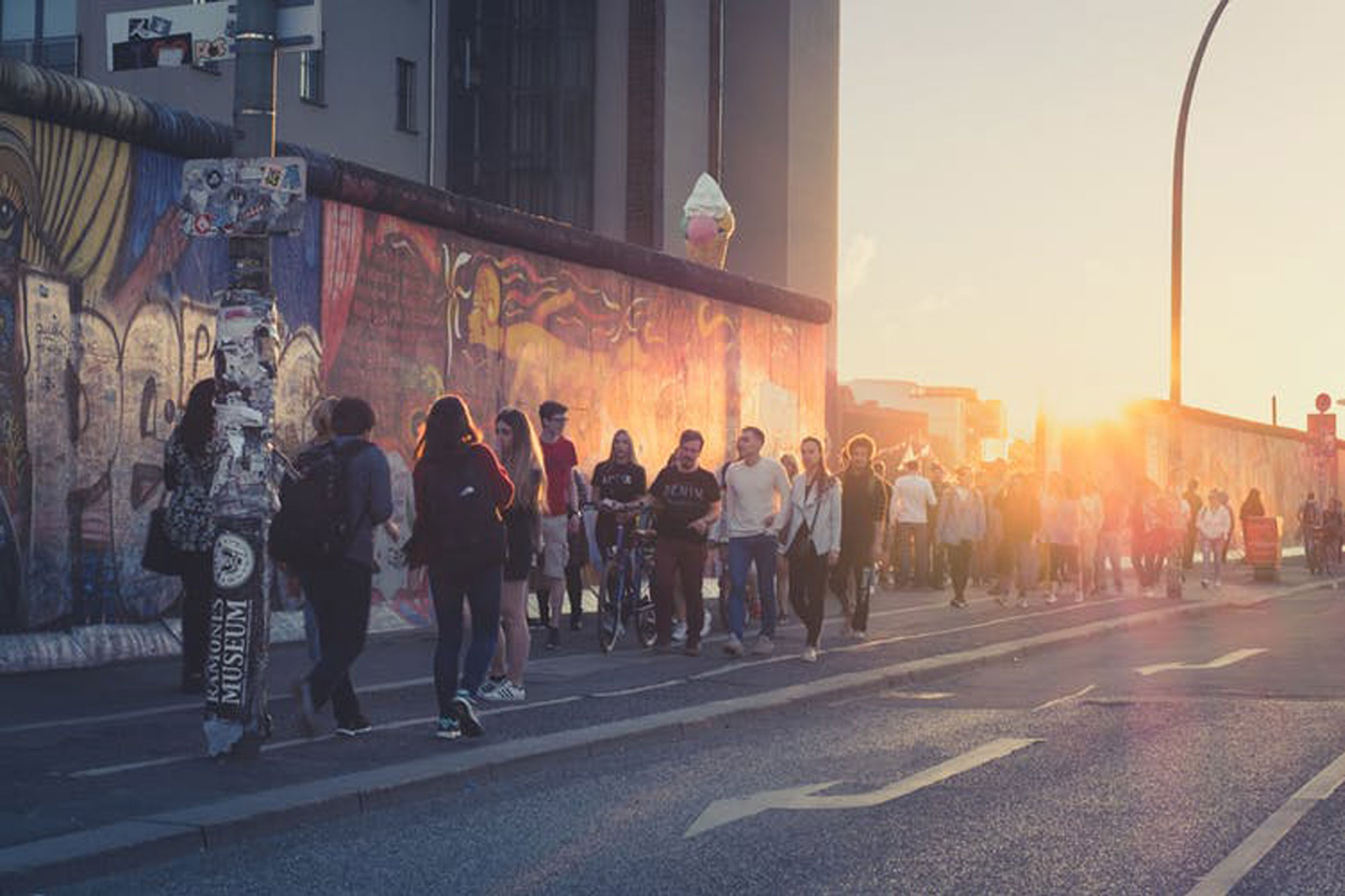 "Remnants of the Berlin wall, 2019" by Hanohiki/Shutterstock.

Modern day Kreuzberg is one of Berlin’s most trendy and multicultural neighbourhoods. Its central location, dynamic mix of cafes, shops and nightlife, alongside residential streets and lucrative river views, all fuse to embody a vibrant urban lifestyle. Kreuzberg encapsulates many of the remarkable elements that make Berlin one of the most attractive German cities to live in today, as well as a leading tourist destination and hub for the international cosmopolitan elite.

Over the past few decades, hundreds of thousands of people have chosen to settle in the reunified heart of the German capital. From 2012 to 2017 alone, the city grew by 243,500 people – 81% of whom were foreigners. As a result, the previously peripheral and impoverished neighbourhood of Kreuzberg has, for some years, been undergoing an extreme process of hyper-gentrification. This has meant that long-term, but less affluent, residents have been priced out by skyrocketing demand for property, fuelled by global investors and wealthier locals. All too often, it’s a process that occurs along lines of class, race and ethnicity.

Hyper-gentrification comes as a mixed blessing, especially in a city once torn by conflict, such as Berlin. There are positive and negative impacts on local residents. But, amid such complexities, it is still regarded by ousted residents as social cleansing, as a stimulating neighbourhood life is lost to the predatory practices of the real estate entrepreneurs. Berlin is an extreme example of just how rapidly cities can respond when a new political and economic status quo asserts itself – and proof that even during peace time, there is a need for urban citizens to unite and fight injustice.

The border within Berlin was first imposed by the Potsdam Agreement in August 1945. But it wasn’t until August 1961 that the Soviet Union installed the wall, over the course of just two weeks – nominally to prevent ‘facists’ from entering the German Democratic Republic (East Germany), but also to stem the flood of outward migration. Until the border was sealed, some 2.7m East Germans moved to the west. Today it’s almost impossible to imagine that, just 30 years ago, Kreuzberg was at the front line of the conflict between the Soviet Union and the United States. Located on the Western side of the Iron Curtain’s demilitarised border zone, the neighbourhood was a rundown frontier precinct. Sniper fire from the eastern border guards was a daily reality and at night the area would be floodlit to detect defectors from the Eastern bloc.

Though poorly maintained, the neighbourhood’s cheap housing attracted migrant workers – predominantly from Turkey – who settled in Kreuzberg from the early 1970s and still make up a significant part of its large and diverse immigrant population. This heritage survives today in the form of some local shops and a famous Turkish food market near the Landwehr Canal.

The wall stood for 10,316 days, with military fortifications dividing and tightly sealing the streets and public spaces that once formed the city’s civic centre. When citizens started tearing down the Berlin wall on November 9, 1989, it marked the return of the original urban core. People flooded across the defunct border to see the other side of their own city for the first time in more than 28 years.

The powerful symbolism of this moment cannot be overstated. But the process of healing that came afterwards was arguably just as significant. Both sides of the city benefited from community groups coming together – with strong support from the federal government – to regenerate Berlin’s heart, where the wall once stood. The rebuilding and renewal of the nation’s capital came to represent postwar healing and remembrance, and Berlin became an international poster child for peace and optimism.

Berlin’s urban transformation continues to foster hope for cities still divided by national conflicts – Baghdad, Beirut, Jerusalem, Mostar, Nicosia, Kirkuk and Sarajevo – to name but a few of the most widely known cases. Though there’s little chance of complete reconciliation in these cities under the current circumstances, it’s nevertheless clear that, with the right political momentum, a rapid process of urban renewal can take place.

This hope is crucial, because walls can physically embed inequalities within the fabric of a city, from restricting access to basic utilities such as water and electricity (like Lima’s wall of shame), to segregating citizens by ethnicity, race or religion (like Belfast’s peace walls) and placing limits on minorities’ control and development (as in Jerusalem). And it’s concerning that, in the 21st century, they seem to be becoming an ever more common feature of urban areas – for example, in the form of gated communities.

Yet bringing down the Iron Curtain overnight ended decades of bitter rivalry, which just days earlier seemed a rock-solid fact. Though inequalities still exist, Kreuzberg’s pivotal shift from the front line of the Cold War to the centrepiece of a united and vibrant urban core has shown that urban planning and policy can be critical tools in designing an effective, attractive, functional city.

Of course, the issues caused by hyper-gentrification must still be addressed. But Berlin’s endorsement of a grassroots push to renationalise homes from corporate landlords, as well as measures to limit the purchase of flats for holiday rentals, seem to confirm that a strong urban planning system can work to balance the interests of various groups (public and private) and communities within the city, under an umbrella that protects the public interest and allows the city to flourish.

Berlin is proof that divided cities can become whole again within the course of a few decades. But, more than that, the city’s transformation shows how vital it is for governments and citizens to be cognisant of new forms of injustice, to organise and use the tools at their disposal to confront the unique and unprecedented political, social and environmental challenges of the 21st century.

This article is republished from The Conversation under a Creative Commons license. Read the original article.