Belgium was and still is a predominantly Catholic country. Although there were a few Protestants among the refugees who came to Tunbridge Wells the overwhelming majority, Flemings and Walloons, were strongly of the Catholic faith.

Inevitably they sought out the Roman Catholic church in the town, St Augustine’s, which was situated until 1967 on the corner of Grosvenor Road and Hanover Street in the centre of the town (where Tesco now stands). Built in the Palladian style in 1838, the church stood opposite Tunbridge Wells’s General Hospital where wounded British and Belgian soldiers were cared for. Many of these also attended services in St Augustine’s. 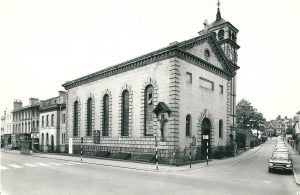 Photo of St Augustine’s with the school next door

The parish priest was Canon James Keatinge (at St Augustine’s from 1906 to 1923), who took a leading part in welcoming the Belgian refugees and worked with those organising the reception of the refugees to find accommodation and provide hospitality. The refugees made St Augustine’s their spiritual home, and had the services in particular of two Belgian refugee priests. These were Abbe Louis Lemmens from SS Peter & Paul Church in Malines (Mechelen) and Abbe Josef Peeters from Lint near Antwerp.

Abbe Lemmens was resident in Tunbridge Wells for 10 months. An advertisement in the Courier in October 1914 requested a small house of 4 rooms, 5 minutes from the church, and with a rent of not more than £1 a week. Whether a suitable house was found is not known, but in February Lemmens moved to 12, Beltring Road. In August 1915 he left Tunbridge Wells to return to Malines, and expressed his thanks in a letter for everything done by the Mayor and his Committee for the refugees, and in particular for the way in which their religious needs had been respected. The letter was published, in French, in the Courier. 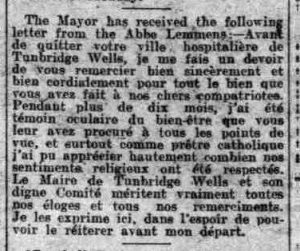 Letter from Abbe Lemmens published in the Courier

Before leaving your hospitable town of Tunbridge Wells, I must thank you most sincerely for all your kindness to aour dear compatriots.  For more than 10 months I have witnessed with my own eyes the well-being you have secured for them, and above all, as Catholic priest, I have greatly appreciated how our religious needs have been respected.  The Mayor of Tunbridge Wells and his worthy Committee truly merit all our praise and all our thanks.  I express them here, in the hope of repeating them before my departure.”

Abbe Peeters commuted up from St Leonards throughout the war and returned to his church in Lint at the end of the war.

Masses were also held in private houses – as this image from The Graphic newspaper of 21 November 1914, found by volunteer Jan Wright in the British Newspaper Archive, shows. 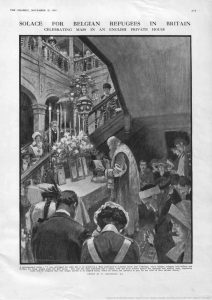 The caption reads: “Solace for Belgian Refugees in Britain, celebrating mass in an English private house” and describes how the hall of a house “near Tunbridge [sic] where Belgian refugees, both military and civilian, are being tended under the Red Cross”  had been converted into a chapel.  This could perhaps be Quarry Hill House VAD hospital, or maybe the VAD hospital at Bidborough Court?

In May 1915 the Bishop of Malines, Dr Wachter, representative of Belgium’s Cardinal Mercier, visited Tunbridge Wells, an event covered at great length in the local press. In addition to taking part in Masses at St Augustine’s and preaching in English, French and Flemish, the Bishop met his fellow countrymen at St Augustine’s School and was received by the Mayor at a reception in the Pump Room to which all who had contributed to the Mayor’s Belgian Relief Fund were invited. Dr Wachter expressed his gratitude that although there were only a small number of Catholics in the town, the Belgians had been welcomed as “dearly beloved brethren”.

There appear to be no figures for the number of Belgians who attended St Augustine’s. The local Catholic congregation was small and must have been considerably swollen by the Belgians and their families. Certainly the number of masses celebrated during the week at the church had to be increased to cater for the temporary increase in the Catholic population of Tunbridge Wells.

At the start of the war there was already one Catholic convent in the town, the Blessed Sacrament. Canon Keatinge was keen to expand the number of nuns in the town, and had already tried to encourage the Society of the Sacred Heart to open another convent at Beechwood House in 1911 but the idea was turned down. However the arrival of a group of 11 nuns of the Order fleeing from Belgium at the beginning of the war saw the proposal revived. Beechwood Sacred Heart Convent and School was established in February 1915 by these nuns, in the house on Pembury Road, with 9 pupils, some of them Belgian refugee children. Beechwood Sacred Heart School still exists today but ceased to be a convent school as such in 1963. 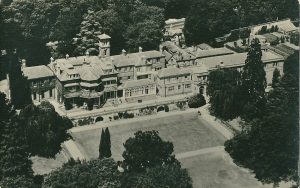 During the war there were several deaths of refugees in Tunbridge Wells. Hippolyte Meeus was the popular and long-standing mayor of Wynegem, a small town south-west of Antwerp, which was on the route of the German advance into Antwerp. Wary of the Germans who had treated prominent citizens and priests of small towns and villages badly, M. Meeus left his home with his wife and extended family for safety in Tunbridge Wells. Both in their 60s and relatively well-off, M and Mme Meeus lived at 4, Nevill Park, and played a prominent part in the life of the Belgian refugee community in Tunbridge Wells – as can be seen in this post on the Club Albert.  Sadly they both died in Tunbridge Wells just weeks apart in 1915, Isabelle in June and Hippolyte in October. Lavish funerals were held at St Augustine’s, and detailed reports of the funerals appeared in the Courier, which described the streets lined with onlookers as a cortege of carriages made the journey from the church to the cemetery. The Requiem Masses were splendid and the church was draped in black. The occasions clearly made an impact on the town. Unlike other member of the Belgian community who sadly passed away during their time in Tunbridge Wells, M and Mme Meeus were not buried in the town’s cemetery, but laid temporarily to rest in the Cemetery Mortuary Chapel until they could be repatriated and buried in the family grave in Wynegem. 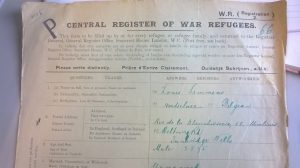 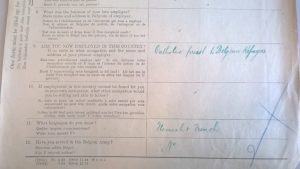 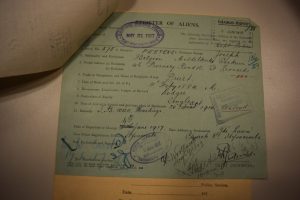 Refugee Registration documents in the National Archives in Brussels, Belgium

Original research by Terry Farrage, member of the congregation of St Augustine’s