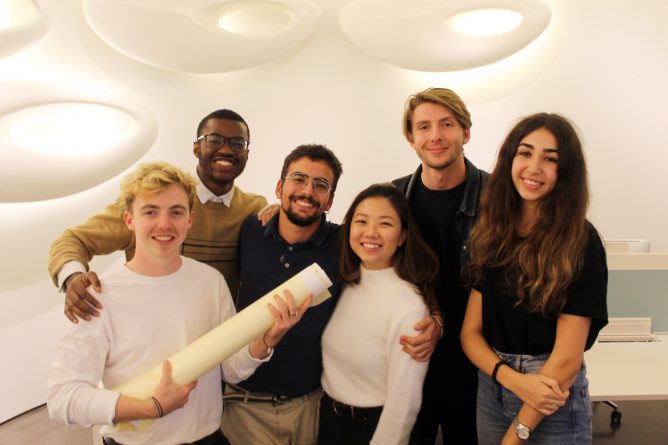 The competition saw an array of participants from six universities and with the hope of continuing last year’s success as winners, a different challenge was posed. A daylong event, full of creativity, set the scene for a promising project. Set in Chelsea, at Lots Road Auction House, the brief for the day was split into two parts; i.e. to choose an object within the auction house, in order to describe its journey from the seller to the buyer, whilst imagining the process of the object in spatial and architectural form. 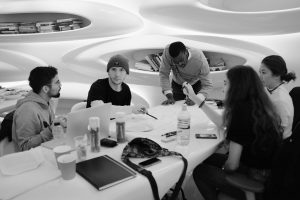 At the Lots Road Auction House, a member of staff gave a short talk about the type of items that are sold and the process of auctioning itself. Particular points stood out to us as we began searching for a concept. We were interested in how the bidding process had changed as technology and the world around had advanced, creating an auction house which worked mainly digitally now. This provoked us to speculate about the future of the auction house and how it may evolve as time goes on. Another interesting facet to the auction house is the bidding process itself and how people spend large amounts of money on items that they do not particularly want or need. This led us try to create a design that would match the drama of the bidding war in its architecture. These influences manifested in an imagined dystopian world where water is scarce and one of its few sources are sheets of ice, imported from the arctic, to be bid on in the Lots Road Auction House. This highlights how an item that is currently taken for granted should have much more value than we attribute to it and plays with the idea of exaggerating the tension within the auction house by bidding on a rare necessity. 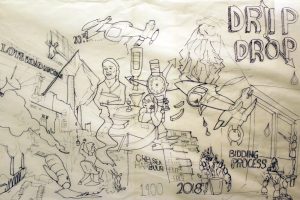 In this scenario, we imagine that the Lots Road Auction House begins to sell ‘fresh, pure water from Arctic ice’ to its wealthy clientele, but as the conventional means of acquiring water becomes more restricted, demand increases for the Arctic-water. Due to this increased demand, the Lots Road Auction House moves in to the nearby power station and begins shipping in sheets of ice via the Thames. A shard of ice hangs between the two chimneys of the power station, slowly dripping in to a glass below it. The glass sits on a plinth in the centre of the power station, surrounded by hopeful bidders. Every time the ice drips in to the glass, a bid has to be made and when there is a drip with no bid, the most recent bidder lifts the glass from the plinth and drinks from it, replicating the hammer moment in the traditional auction house. As the bids are made, the new price is projected onto the side of the ice and the number of lights within the power station rise as the bid increases, elevating the tension of the process. From the outside, the city of London looks on as a level in the power station chimneys decreases, representing the ever-diminishing amounts of ice left in the Arctic. This in turn creates panic in the city, making its inhabitants flock to the power station to bid on water, once more increasing its value and adding to the intense nature of the bidding process. We portrayed this transformation of the Lots Road Auction House with various collages, models, sketches and drawings.

Overall, the judges were looking for a more conventional version of the auction house rather than the surreal proposal we developed. In the end, it was the students from the University of Westminster who succeeded to take this year’s title as winners of the AIA Student Charrette 2018. We learnt a lot during this CAD-free event, and it enabled us to be as creative as possible, learning how to respond to a brief through the methodologies of hand-drawing and model making.

We would like to congratulate the winning team and thank Amrita Raja, our mentor for the day, ROCA and Laufen for supporting yet another successful event. 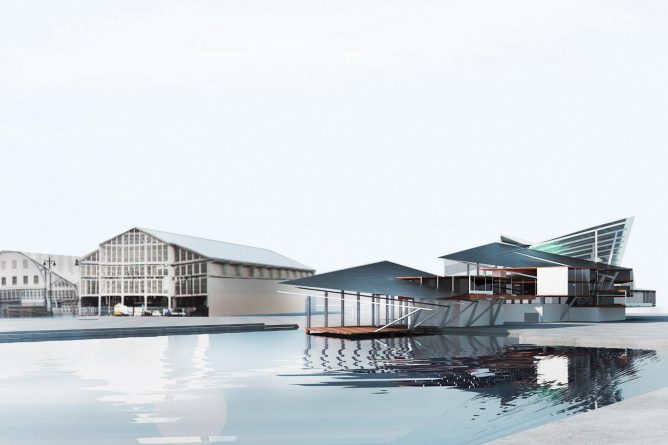 Kent School of Architecture are delighted to present this public exhibition of selected Stage 3 student work from the BA (Hons) Architecture course during 2017/18. The three design projects were all linked and based at Chatham Historic Dockyard on the river Medway in Kent; a site of significant historical interest and of conservation merit. This exhibition presents selected proposals designed to transition the past into the future. KSA worked closely with the Dockyard Trust, Medway Council and the University of Kent Medway throughout the year.

The Autumn term project ‘Urban Intervention’ has two components: The first, to design a masterplan developing a future vision for the site through making proposals for new-build insertions, changes of use to existing buildings, and landscaping. The second, an ‘Adapt and Extend’ project to re-design one of three pre-selected buildings into a ‘multi-generational care facility’ including a nursery and accommodation for the elderly.

The Spring term project ‘Architectural Design’ asks students to design a new-build multi-use building on a site of their choice within their masterplan. The project was entitled “One World Workshop’ and had a programme of rentable, bookable, and flexible spaces.

This exhibition, curated jointly by Kent School of Architecture tutors Chloe Street Tarbatt, Maria Araya and Henry Sparks, publicly showcases a snapshot of these projects. We hope it will serve to increase the awareness and impact of our activities at KSA within and beyond the confines of the university, sparking curiosity and debate with the general public. 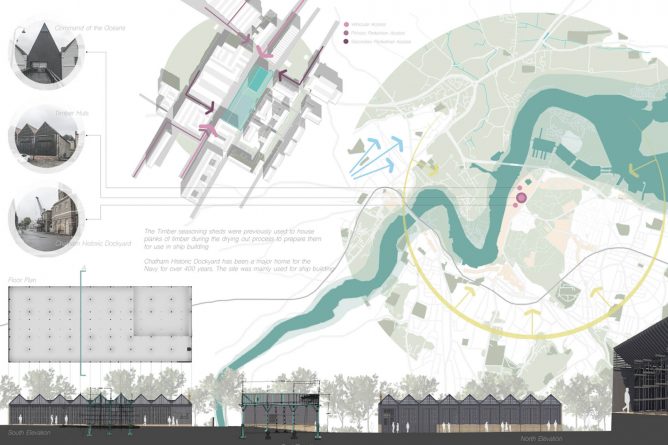 Urban Intervention is a design project which takes place in the Autumn term of Stage 3. The module engages students in the re-design of an existing urban centre or locality in two parts, beginning with a master-plan and public realm study, and moving on to the design of a detailed building design adapting and/or extending the existing building fabric. Urban design is the practice of designing towns and cities. This is architecture approached at an urban scale, ranging from a neighbourhood to an entire city. The adaptation and extension of existing buildings for new uses is also a staple of architectural design practice, ranging from unobtrusive to the complete visual overhaul and updating of an existing building.

The brief for this year’s project was based at the University of Kent’s Medway Campus, which straddles the Pembroke site (shared with Greenwich and Canterbury Christchurch Universities), and The Historic Dockyard, Chatham. The School of Architecture was approached by the Dean for the University of Kent Medway campus, Professor Nick Grief, who showed interest in collaborating with KSA on developing proposals for improving circulation links between the two sites, and upgrading the quality of public realm.

Several students signed up for the design charette in Spring 2017, which kick-started the School’s involvement with the project, introducing the unusual qualities of the area, and the potential to be involved in developing ideas for the future development of Chatham Historic Dockyard. The advantages of working on this type of ‘Live Project’ are significant in providing students with a network of real clients, an insight into the complexities of development, and the ways in which society at large, shapes our role and agency as architects / designers.

Six students were asked to present their final design projects for ‘Urban Intervention’ in a ‘Client Feedback’ session at the Sail and Colour Loft on the Chatham Historic Dockyard site to Professor Nick Grief, Bill Ferris, CEO of Chatham Historic Dockyard Trust and Duncan Berntsen from Medway Council. The ‘clients’ involved expressed great enthusiasm for the work presented, and noted that the professionalism and confidence exhibited was outstanding, and their presentations both inspiring and hugely impressive in all respects. 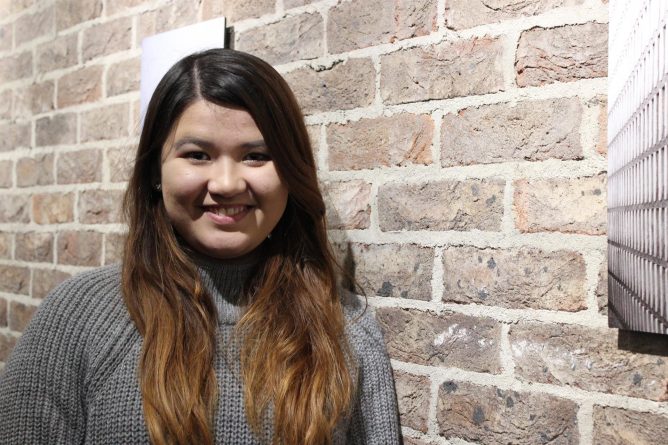 I was first introduced to the Academic Peer Mentoring scheme in my first year at the Kent School of Architecture, and was assigned a third year student to be my mentor. As a first year student, new to the school, my mentor helped me gain confidence in design by going through his own techniques and by talking to me about his own experiences as a student.

After learning so much from my mentor in my first year, I then decided to pass on what I had learned to the next year’s intake, so I applied to become a mentor myself. As a mentor, I would arrange to meet up with my mentees to discuss any issues and problems they would have regarding the course. The mentee-mentor relationship works well as mentors can advise and guide the lower years on their projects since they studied the modules previously.

Mentors are on hand to offer assistance throughout the entire design process from initial conception to final presentation and help with project management techniques like time management, computer program literacy and presentation techniques. Being able to explain the whole project and design to an external person not involved in the module can be very helpful to bounce ideas off and to see the project and design with a fresh set of eyes which can lead to the discovery of a flaw in their design or areas of potential improvement.

Being both a ‘mentee’ and a ‘mentor’ for the past two years has allowed me to build connections in the studio with students from years above and below, as well as enabling me to improve my own critical analysis skills which I subsequently use on my own designs to further improve them.

The mentoring program is an invaluable resource that shouldn’t be underestimated by students in all years and should be fully utilised as a resource that the Kent School of Architecture offers. 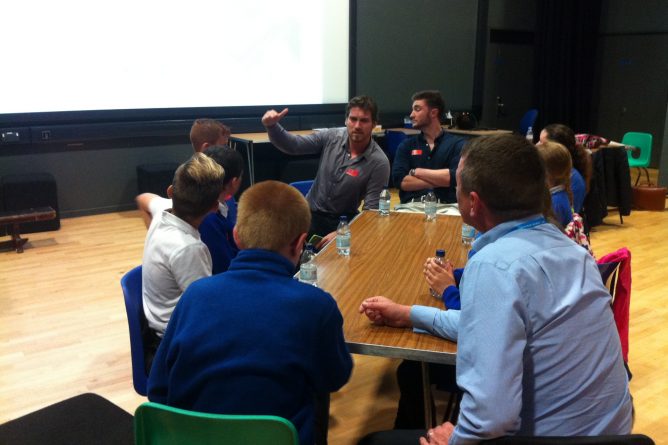 The Beachfields Partnership, Sheerness, invited eleven of our graduating third year students to The Oasis Academy Theatre on the Isle of Sheppey to meet with the students and present their work. There will hopefully be a public exhibition arranged by Swale Community Leisure to follow. Thank you to Valentin Abend, Prinka Anandawardhani, Jed Cracknell, Lauriane Hewes, Manveer Sembi, Linda Malaeb, Jamie Griffiths, Nicholas Mourot and Ed Powe for your enthusiasm and participation in this great event. 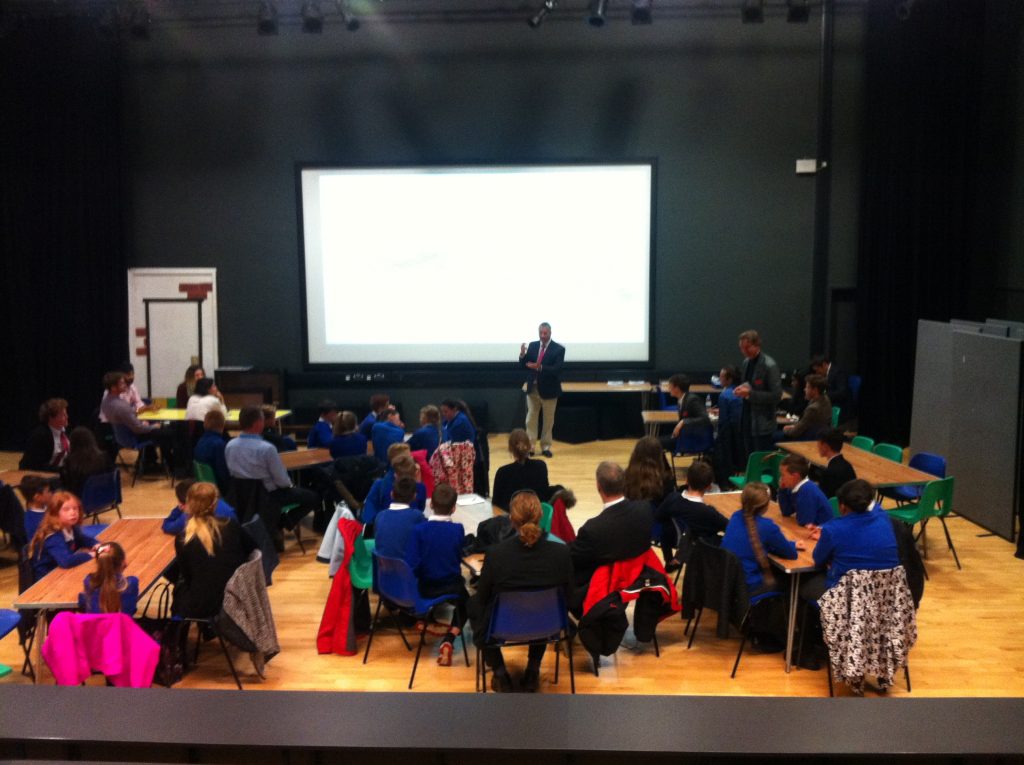 On Thursday 3rd March, we held our annual careers event whereby we invited local practitioners to present themselves to our Stage 3 students, and spend time in the studios conducting mock interviews, advising on CVs or taking Q&A sessions on their practice. The aims of the event are to create links between the school teaching staff, students and architectural practices, to offer guidance to graduating students on how to maximise their chances of employment and also to provide a forum for local practices to discover potential future employees in person in an informal setting. Below are some photographs of the event!