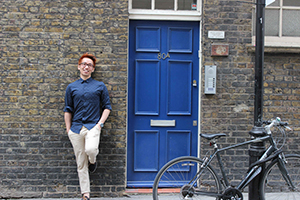 What attracted you to studying at Kent?
Coming to the University of Kent was an easy decision for me as the course was exactly what I was looking for. I previously studied Architecture at undergraduate level in Malaysia but I wanted to go in a more digital direction so the MA in Architectural Visualisation was the perfect choice.

What were your first impressions of Canterbury?
Coming to the UK to study was actually my first visit here. I spent some time in London before heading to Canterbury to start my studies and have found that there is not as many distractions in Canterbury as there is in London making it a great place to study! Canterbury is only a 15 minute walk away and there are lots of nice places to eat and drink. There are a lot of transport links in the city which take you out to the coast and there is also the high speed to London.

Have you enjoyed studying at a campus university?
The Canterbury Campus is full of green spaces making it a great place to be in sunny weather. I live in Woolf College which has a good mix of students from all around the world, the accommodation is quiet, making it a good place to study. There are plenty of food outlets and bars on campus, a campus shop, doctor’s surgery and all the other facilities that you will need.

What are your plans after you have finished studying?
I plan to look for a job in London after I have finished my studies. I would like to ideally get a job in the gaming or film industry in the future.

What have you enjoyed most about the course so far?
I really enjoyed doing the ‘month project’ as it gave me the freedom to choose an area which interested me. My project focused on film animation, the film I used in my project was called Howl’s Moving Castle directed by Hayao Miyazaki. I have found the course quite demanding in terms of workload however I have learned an awful lot already. There is a nice mix of modules on the course and I have made some very good friends on the course.