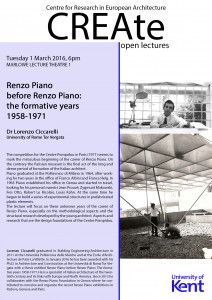 The next CREAte Open Lecture will be given by Dr Lorenzo Ciccarelli on Tuesday 1st March at 6PM in MLT1.

The competition for the Centre Pompidou in Paris (1971) seems to mark the miraculous beginning of the career of Renzo Piano. On the contrary the Parisian museum is the final act of the long and dense period of formation of the Italian architect. Piano graduated at the Politecnico di Milano in 1964, after working for two years in the office of Franco Albini and Franca Helg. In 1965 Piano established his office in Genoa and started to travel, looking for his personal maestri: Jean Prouvé, Zygmunt Makowski, Frei Otto, Robert Le Ricolais, Louis Kahn. At the same time he began to build a series of experimental structures in prefabricated plastic elements. The lecture will focus on these unknown years of the career of Renzo Piano, especially on the methodological aspects and the structural research developed by the young architect. Aspects and research that are the design foundations of the Centre Pompidou.

Lorenzo Ciccarelli graduated in Building Engineering-Architecture in 2011 at the Università Politecnica delle Marche and at the Ecole d’Architecture de Paris-La Villette. In January 2016 he has been awarded with his Ph.D. in Architecture and Construction at the Università di Roma Tor Vergata with a thesis entitled Renzo Piano before Renzo Piano. The formative years 1958-1971. He is a specialist of Italian architecture of the twentieth century and its links with Europe and North America. Since 2013 he collaborates with the Renzo Piano Foundation in Genoa where he contributed to conceive and organize the recent Renzo Piano exhibitions in Padova, Genova and Paris.