On Monday, we attended a lecture on the Roman Forum by Professor David Watkin, one of the most important historians of our times. The “Foro Romano”, visited by millions every year, has had a fascinating and vivid building history from Antiquity to the Present. During this period, the forum was repeatedly modified, and as a result, distinguishing the dates of its buildings is not always easy. Temples that seem to be ancient were in fact erected just eighty years ago. For instance, the Temple of Vesta, in its present form, dates back to the 1930s (Watkin David, The Roman Forum, p.16).

Examining views of the forum, including the famous ones engraved by Piranesi, Watkin revealed the Roman monuments in all their grace and splendour, and traced their development from the Early Cristian Times to the Baroque period. The way in which churches were integrated into old roman edifices was absolutely astonishing. On the other hand, the Nineteenth Century idealized the “magnificent Roman ruins” at the expense of more recent buildings.

After a visit to the Forum it is easy to feel disorientated as you are trying to resolve a puzzle of multiple building phases that make the monuments comparable to palimpsests. Despite the archaeologists’ recent interventions to the site (considered to be “clumsy” by Watkin), the Roman Forum remains an ideal site to study Rome’s history and architecture as well as the development of conservation philosophy. 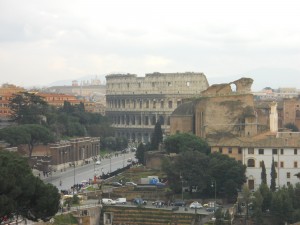